“So now Apple’s taking up the torch, and if rumours prove true it’s not just adding speech tech to the iPhone… it’s transforming the device into something new again, starting a whole new paradigm. If it works for Apple, expect others to follow. Get ready to meet your smart personal assistant.”

I find voice recognition (including Apple’s) at this point is pretty inaccurate, lol. Of course Apple would be the first to make it excellent for the mass market. :D

“Apple has finally made the news official. The next iPhone is going to be introduced on October 4th.”

I hope I am eligible to upgrade!! :D

“On September 24 the sun unleashed a strong solar storm—an outburst of energy known as a coronal mass ejection that sent a massive cloud of plasma and magnetic energy hurting through space and toward the Earth at 5 million mph.”

“Word of mouth “through friends, family, neighbours and colleagues” outranked the newspaper, the radio, the Internet and every other new and traditional form of news media except for television when it comes to the most widely followed sources of local news.”

“Northern Ireland farmer Alan Graham says he doesn’t know who Rihanna is but she must keep her top on while performing on his land.”

“There are plenty of other Earths out there.”

Took them long enough to come to that conclusion!

We shouldn’t try to seek immortality.

“A mitochondrial analysis of the newly discovered fish has shown 200 million years of independent evolution…some of the laundry list of different features are so primitive that they’re deemed older than the most ancient fossil remains.”

“Two patrons filed suit against the Baluchi’s restaurant chain yesterday over claims that their bill was illegally padded with an “automatic” 18 percent gratuity reserved for South Asian customers.”

LOL, oh my god. I mean, for the most part it’s true, worst tippers ever, lol. But definitely not a good move by the owners of this restaurant, LOL.

Obvious, lol. I would say my eating habits have positively affected Mike ^_^

“If it seemed like the writers were making things up as they went along, by the way, they often were.”

LOL. Whatever, still one of the greatest shows of all time!!

“It’s like the Mary Tyler Moore show, only with a guy on a buffalo instead of single career woman with a can-do attitude.” 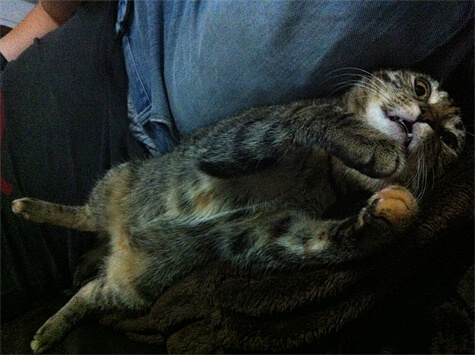 Linda Hoang is a Canadian blogger based in Edmonton, Alberta, who writes about travel, food lifestyle and pet topics. She's also a seasoned social media/digital strategist with a journalism background. Linda loves exploring the world with her husband Mike, eating their way through cities, supporting local businesses, and photographing Instagrammable Walls. She is the founder of the Edmonton International Cat Festival and a fur-mom to two cats and two dogs.
PrevPreviousClicks of the Day: Monday, September 26, 2011 Edition!
NextReview: Japanese VillageNext