“Only 2 weeks old and trapped under an earthquake-destroyed building in Turkey, rescuers found little Azra Karaduman and pulled her to safety. Then, in a glorifying reunion, they freed her mother, too.”

“The Javan rhinoceros, an endangered species, no longer exists in Vietnam: poachers killed the last one and took its horn, according to the World Wildlife Fund.”

“The upside is that more than half of those surveyed use their devices to read the news — and they are reading more than they used to before they had a tablet. And the downside of all this news reading? Many of the sources tablet users are getting their information from are non-traditional, including social networks, and very few users say they are willing to pay for their news.”

Lol, I personally don’t see myself paying for news. Ever.

“Apple has been awarded another patent by the United States Patent & Trademark Office, this time it’s patent number 7657849 which grants them the rights to “Unlocking a device by performing gestures on an unlock image”.”

Lol. It’s kind of crazy how they keep getting patents for everything.

“Android captured a leading 44 percent of all mobile app downloads in the second quarter, according to ABI Research, surpassing Apple’s iOS, which grabbed 31 percent.”

“Some bets just shouldn’t be made. Just ask a 21-year-old Vallejo man who made a $100 bet with his friends that he could fit into a baby swing at a local park.”

“Amazon stunned the business world this afternoon with the announcement that third quarter profit had fallen 73% despite net sales rising 44% during the same period.”

Amazon doesn’t deserve that! They have the best customer service and quickest shipping EVER!!

“Children wanting to wear scary, violent or blood-drenched costumes will have to trade them in for more caring and community friendly outfits at two public elementary schools this Halloween.”

Hm. Kind of takes away from Halloween.

“Gas pump handles turned out to be the filthiest surface that Americans encounter on the way to work.”

I hate the feeling after touching gas pump handles!!

“We’re building a new bridge in Edmonton on Tuesday. One that needs you — your stories, your photos, your videos. The Edmonton Journal is launching a community newsroom, a special area on our website that will allow you to share information of all kinds with us and the rest of the community.”

Interesting initiative! Will be interesting to see how people take to it.

“Halloween may be a ghost of its old self this year, with Statistics Canada reporting conditions that could see the lowest turnout in more than two decades.”

Sad!!! Yeah we barely had anyone come to our house a couple years ago… Mike and I are expecting quite a bit of kids in our new neighbourhood this year though! And we’re prepared! :)

“Up to 20 million tons of tsunami debris floating from Japan could arrive on British Columbia’s shores by 2014, according to estimates by University of Hawaii scientists.”

There was basically a lot going on today in regards to the downtown arena debate. I followed along via Twitter #yegarena hashtag but the Edmonton Journal has a great collection on the issue. Good to read but also at this point exhausting, boring, frustrating. I’d just like a decision to be made already – either way.

“On your mark, get set, go place those opening bids for the ATCO/SUN Christmas Charity Auction that officially opens Tuesday.”

Incredible! I don’t know how he does it. Such detail. 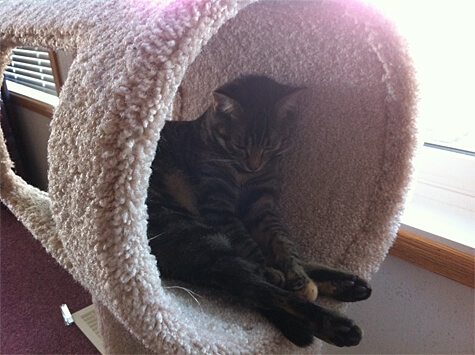 Linda Hoang is a Canadian blogger based in Edmonton, Alberta, who writes about travel, food, lifestyle and pet topics. She's also a seasoned social media/digital strategist with a journalism background, the founder of the Edmonton International Cat Festival and co-founder of Stop Race Based Hate, an online anti-racism education tool. Linda loves exploring the world with her partner Mike, eating their way through cities, supporting local businesses, and photographing Instagrammable Walls. Linda is a fur-mom to two cats and two dogs.
PrevPreviousClicks of the Day: Monday, October 24, 2011 Edition!
NextClicks of the Day: Wednesday, October 26, 2011 Edition!Next