“Authorities say that Seay did battle with the 16-year-old girl for two hours until she eventually collapsed from exhaustion.”

What a weirdo dad..

“A man found out his wife was two-timing him after turning on his new iPhone 4S and his ‘Find My Friends’ app pinpointed her exact location she never told her husband.”

Lol. That’s bad. Not that I’m a cheater but this is another reason why location pinpointing apps are lame.

“BlackBerry maker Research In Motion Ltd. unveiled a new operating system Tuesday in hopes of grabbing some attention away from the iPhone and Android phones.”

Who thinks this will actually help RIM? Raise your hand! No, no one?

“Officials in the country are reporting that traffic accidents plummeted 40 percent in Abu Dhabi and 20 percent in Dubai between last Tuesday and Thursday, when the BlackBerry blackout rolled through the Middle East.”

Fascinating. Would be interesting to see the numbers for North America, lol.

“Skeptics will now be recognized as laggards as they now officially stand in the way of progress. According to Nielsen, and well, reality, social media isn’t a fad.”

“A South Florida woman got a shock when she opened a recent cellphone bill: she owed $201,000. It was no mistake.”

Wowza! But – a call to the media and she gets the bill cut down to $2,500 able to pay over a period of 6 months – that’s pretty good media relations, lol.

“After going down on one knee, the man asks his bride-to-be if she will ‘occupy his life.'”

How cute is that! Video gave me goosebumps!

“From yoga to catered lunches, 401(k)s to dry cleaning, sports teams to vacation days, these tech companies seem to understand that quality of life affects productivity — and that having to run fewer errands after work means you’re more likely to stay at the office.”

Man. That’s the life, lol. Can all companies offer these perks?

“‘We want to be part of the fabric over every communication in the world, and we think we can reach every person on the planet.'”

Quite ambitious. And realistic, lol.

“In a time when reality TV contestants eat live insects and otherwise degrade themselves for 15 minutes of fame, some little people say they have the same rights as average-sized people to exploit themselves.”

“Apple plans to close some of its retail stores for at least an hour Wednesday, according to two people familiar with the matter, a gesture that coincides with the company’s planned celebration of co-founder Steve Jobs’s life at its headquarters.” 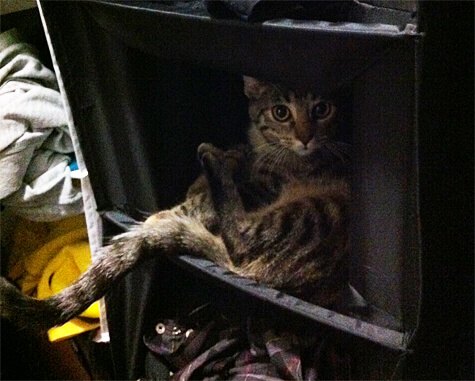 Get out of the closet Thor!!!

Linda Hoang is a Canadian blogger based in Edmonton, Alberta, who writes about travel, food lifestyle and pet topics. She's also a seasoned social media/digital strategist with a journalism background. Linda loves exploring the world with her husband Mike, eating their way through cities, supporting local businesses, and photographing Instagrammable Walls. She is the founder of the Edmonton International Cat Festival and a fur-mom to two cats and two dogs.
PrevPrevious[Recommendation]: I Love Papyrus Cards!
NextClicks of the Day: Wednesday, October 19, 2011 Edition!Next