Another sad Christmas budget/outlook story, lol. Remember frugal is the new normal and great gifts can be given that are cheap too!

“In an attempt to make voting easier for the elderly and disabled, Oregon is letting citizens in five counties cast their votes on Apple iPads.”

You go, Oregon! A next step in elections.

“A growing number of 4S users have found a significant audio bug: On some calls, they cannot hear the person on the other end.”

This would explain why Mike and I always have problems with audio when we talk on the phone, lol. #ItsHisFault

“They’re going for an even 20! Michelle and Jim Bob Duggar, stars of TLC’s 19 Kids and Counting, are expecting their 20th child this spring.”

“Just over half of American pet owners will buy gifts for their pets this holiday season, and they’ll spend an average of $46 on their animals, with toys and treats topping the list.”

Hehe. Yes, Thor will likely be sporting a holiday hat of some kind. Christmas wrapping paper will likely be a fun gift for her as well as the gift boxes. She’s a pretty easy to please kitty :)

“For as many as 30,000 soldiers buried in Canada, no one knows where their poppies blow. They are the dead whose graves are unmarked.”

Not cool at all…

“An update to the official Starbucks Canada iPhone app, which went live last night on the Canadian iTunes store, will now allow Canucks to pay for caffeinated bevvies, cake pops and other goodies simply by holding their iPhones up to a scanner at the cashier.”

Oh good, a more convenient way to get Canadians to spend their money frivolously!

“The much-rumored but hidden panorama mode in the iOS camera app has been uncovered.”

I haven’t had time to try and find it/unlock it but I am looking forward to using panorama mode when I do get some time to figure it out!

“Birds in central California are significantly larger than they were 25 to 40 years ago, and researchers believe it may be because they are bulking up in body weight to ride out severe storms related to global climate change.”

“”Einstein once said, ‘A person who has not made his great contribution to science before the age of 30 will never do so.’ That peak age has shifted considerably, a new study found, with 48 being prime time for physicists.”

Cool ;) So it’s not too late for that big idea people!

“After travelling through the jungles to interview rebels, Papua New Guinea Post-Courier reporter Simon Eroro was told that they would only talk to him if he first went through a cleansing ceremony that involved circumcision with bamboo sticks. Determined to get his story, Eroro agreed.”

“American newspapers are generally wary of “confusing the reader by mixing fact and opinion.” By placing editorial opinion right next to its most prominent news coverage, a newspaper risks raising questions about its objectivity. Are American newspapers doing this more than they used to? Quite possibly.”

Interesting read. I personally don’t like front-page editorials. Editorials and opinion columns are fine for inside a paper but putting it on the front page makes it seem/feel like objectivity and non-bias is being thrown out the window and that’s not cool. I’ve only ever seen an editorial front page in a Canadian paper when it comes to an election/the front page telling people who they should vote for – which I think especially shouldn’t be on the front page of a paper.

“Backed by heavyweights in three disparate industries–Amazon, CAA, and Greylock Partners–WhoSay.com lets celebrities do something Twitter and Facebook don’t: own their online content. Tom Hanks, Anderson Cooper, Lindsay Lohan, Paul Feig, and nearly 900 other stars have already signed up for the service.”

“A technical glitch allowed reporters to listen in on a private conversation between French President Nicolas Sarkozy and US President Barack Obama, made in a backroom meeting at the G20 summit, treating listeners to a rare insight into the importance of personal relationships in international politics.”

“Adobe Systems Inc. announced Tuesday it is axing about 750 full-time jobs in North America and Europe as it restructures its business around digital media and marketing.”

“Attitudes in Alberta on hard-line issues such as abortion and same-sex marriage are softening, results of a recent poll suggest.”

“A Canada Post employee was taken to hospital with minor injuries on Tuesday afternoon after she was allegedly shot with a toy weapon.”

Ugh. What is wrong with people – raise your kids right, parents.

“Google, Apple and now Microsoft are moving aggressively to expand the market beyond technophiles willing to pay top dollar for the trendiest phones.
“Turns out about 70% of the folks in the U.S. haven’t taken the leap to a smartphone yet,” says Greg Sullivan, senior mobile communications manager at Microsoft. “Over the next few years, hundreds of millions of new smartphone users will come on board, especially at attractive prices like this.””

It’s pretty cheap and therefore will be quite appealing to a lot of people – but I’ll stick to my iPhone thanks ;)

“If asked how many friends you have, some may have trouble distinguishing between the lengthy list of Facebook friends and those close pals you confide in. Well, it turns out, Americans’ lists of the close type has shrunk to two, down from three confidantes 25 years ago, a new study suggests.”

Believable. A few real close friends is all you need in life :) 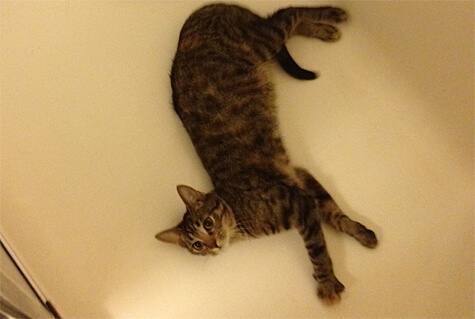 Linda Hoang is a Canadian blogger based in Edmonton, Alberta, who writes about travel, food lifestyle and pet topics. She's also a seasoned social media/digital strategist with a journalism background. Linda loves exploring the world with her husband Mike, eating their way through cities, supporting local businesses, and photographing Instagrammable Walls. She is the founder of the Edmonton International Cat Festival and a fur-mom to two cats and two dogs.
PrevPreviousClicks of the Day: Monday, November 7, 2011 Edition!
NextClicks of the Day: Wednesday, November 9, 2011 Edition!Next