“Controversial Christian broadcaster Harold Camping has acknowledged his faulty projections, and issued an apology to his followers. The Christian Post reports that the longtime radio evangelist has retired.”

“Organizers of Movember say they expect the death of NDP leader Jack Layton will inspire more men than ever to join the popular moustache-growing fundraiser.”

“The changes have not rolled out to everyone, but if you would like to switch now, Google says it is rolling out a ‘Switch to the new look’ link in the bottom right corner of your Gmail inbox over the next few days.”

I switched over! Have you? It’s a nice Gmail look. I can be very attracted to the minimalist look.

“The number of Canadians using food banks has declined slightly, but persistent demand indicates many are struggling in a frail economic recovery… The findings reveal that recipients span the spectrum.”

We haven’t gotten to needing Food Bank use (yet? lol) Let’s see how this economy goes.

“A new report says cancer and heart disease were responsible for just over half of Canada’s 238,617 deaths in 2008. And Statistics Canada reports cancer was the leading cause of death in every province and territory for the first time.”

What. Why would light drinkers be punished like this? That’s dumb. But I am not a three alcoholic beverage a week person, more like a couple a year. Hope that sidesteps the breast cancer chances…

“A sushi bar is a refreshing change on Bourbon Street, with its abundance of dark pubs and chain-restaurant food, and Oranj’s extensive menu is a far cry from the California rolls on offer at the food court.”

Stoked to try this out!! :D

“A massive wildfire that destroyed one-third of the town of Slave Lake in mid-May was likely caused by arson and will be investigated by the RCMP.”

“Tom McClocklin hasn’t lost his inner groovster. At 91, he swings his hips and lets his arms fly to Michael Buble tunes twice a week during Zumba class.”

Will make sure Mike sees this and ensures we are ready, lol.

“The decision means BlackBerrys and live social media updates are now off the table for journalists covering the sensational case.”

“Much time has been spent, over the past century, on working out exactly what it is about the sound of fingernails on a blackboard that’s so unpleasant. A new study pins the blame on psychology and the design of our ear canals.”

Lol. Even reading the headline gave me goosebumps!

“These mosquitoes are genetically engineered to kill — their own children. Researchers on Sunday reported initial signs of success from the first release into the environment of mosquitoes engineered to pass a lethal gene to their offspring, killing them before they reach adulthood.”

Wow. This is all kinds of wrong and makes me sick and sad for humanity yet again. Can we please stop meddling for once.

“A senior police officer in Gatineau, Que., is defending the fatal police shooting of two cattle last week, saying a video that captured the incident and was posted online _ does not show the whole story.”

This story is ridiculous. THEY ARE COWS. Why the heck are you shooting at them. Two cows are not threatening the public what the hell.

“‘They’re trying to exploit this as much as they can'”

Interesting read on E!’s decisions post-Kardashian-divorce news. Of course response would be negative.

“The details are scant, but the lawsuit claims that 20-year-old Mariah Yeater of California slept with the pop star while backstage at one of his concerts when she was 19.”

LOL what, messed up.

“For just $5, tourists and their kids will snuggle up with Baby Bobby, a five-year-old alligator weighing approximately 35-pounds, or any of Sturgill’s smaller and somewhat cuddly gators.”

Baby ones are pretty adorable. But yeah the muzzle thing is tugging on the animal rights strings inside me.

httpvh://youtu.be/CdFylFYbFJQ
Our friend Andy died today. This was the music video he made for a NAIT assignment. I thought it should have won the Star Award for that semester… :) I was re-watching the video again today so thought I would include it in today’s Clicks. Andy was a great, hilarious guy and it’s so sad that he’s gone. 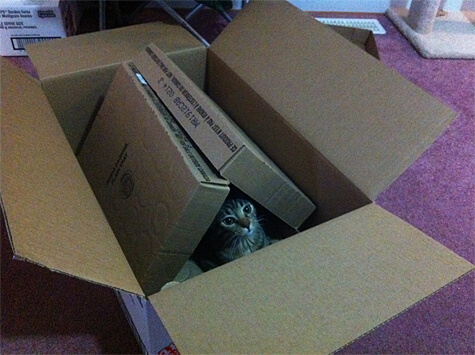 Lol. She loves her boxes.

Linda Hoang is a Canadian blogger based in Edmonton, Alberta, who writes about travel, food, lifestyle and pet topics. She's also a seasoned social media/digital strategist with a journalism background, the founder of the Edmonton International Cat Festival and co-founder of Stop Race Based Hate, an online anti-racism education tool. Linda loves exploring the world with her partner Mike, eating their way through cities, supporting local businesses, and photographing Instagrammable Walls. Linda is a fur-mom to two cats and two dogs.
PrevPreviousClicks of the Day: Monday, October 31, 2011 Edition!
NextClicks of the Day: Wednesday, November 2, 2011 Edition!Next