(Note: I forgot Monday’s edition because it all melded into my long weekend lol).

I love looking at footage/photos of these kinds of crazy earthly and natural eruption/disaster situations. lol, this video reminds me of the Boston Big Picture‘s photo set on the 2008 Chaiten Volcano! So crazy.

Lol. So stupid! I believe in the end of the world coming at the end of 2012, not the end that Camping keeps predicting. :-)

The only reason I still read physical newspapers is because my parent’s have a restaurant and have them for customers so when I stop by I’ll browse a bit – but for the most part all of my news consumption is done online but this was a fun read! Definitely want to do newsprint nails! :)

Great read and also I think that is so awesome that BBC has an actual desk that looks into news/reports/etc. from social media websites. SERIOUSLY. What a great addition to a newsroom!

This is stunning I can’t believe this photo is actually a photo!

This is an impressive stat. I have a Dropbox account but I hardly use it… apparently my actions would be in the minority of most Dropbox users, lol.

Haha! If this were for Volkswagens’ I get be getting tweets all the time with my bust-all-the-time beetle. Interesting idea though.

This is not the On this Day for today but I had seen this on the 23rd and saved it for today because I think it’s so interesting how newspapers used to look. Talk about crammed. I think it’s so cool that the NYTimes logo has stayed the same throughout the years though!

I think this is interesting! You don’t even have to buy anything to use the Wi-Fi. Will this be the place to be to fulfill people’s Wi-Fi needs?

So sad. It just seems like its natural disaster after disaster this year. Yet another sign of the end of days…

This is scary (if Canadian piracy laws ever become like America’s). But it’s going to take decades to sift through IP addresses, lol. Still interesting to see companies taking action on this kind of thing…

Not the best year for Sony, lol.

I HATE missing school/work because I’m sick. I think I haven’t missed more than 10 days of school throughout my entire kindergarden through post secondary education, lol. If I can tough it out, I will!

Today’s “Animals with Stuffed Animals” post of the day comes from my very own new kitty THOR! With mini keychain Quatchi. I am sure as time goes on I will be better at making Thor and (stuffed animal) not look so forced together, LOL. 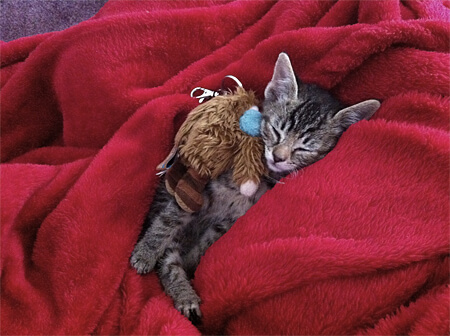 Linda Hoang is a Canadian blogger based in Edmonton, Alberta, who writes about travel, food lifestyle and pet topics. She's also a seasoned social media/digital strategist with a journalism background. Linda loves exploring the world with her husband Mike, eating their way through cities, supporting local businesses, and photographing Instagrammable Walls. She is the founder of the Edmonton International Cat Festival and a fur-mom to two cats and two dogs.
PrevPreviousClicks of the Day: May 20,21,22 2011 Weekend Edition!
NextClicks of the Day: Wednesday May 25, 2011 Edition!Next