“Calgary, Vancouver, Toronto and Montreal didn’t make top 10… Ottawa has been named the best place in Canada to live for the third straight year… Prairie cities such as Regina and Red Deer, Alta., cracked the top 10 — at fifth and ninth, respectively — thanks largely to their low unemployment rates and high income levels.”

“Disgraced former junior hockey coach Graham James has been sentenced to two years in prison for sexually abusing two of his players… James pleaded guilty in December to repeatedly sexually abusing NHL star Theo Fleury and his cousin, Todd Holt, when they played for him in the Western Hockey League in the 1980s and ’90s. Holt responded immediately with disappointment. ‘This sentence today is nothing short of a national travesty because we know that childhood abuse has reached epidemic proportions in our country,’ he read from a statement at a news conference in Cochrane, Alta.”

“Student protesters triggered a monster traffic jam in Montreal by blocking off access to a bridge this morning. In one of the more dramatic acts during the ongoing protests against tuition hikes, several dozen students stood across the Champlain Bridge during rush hour.”

Montrealers protest a lot. Also – you guys, your tuition is still the lowest in all of Canada, calm down please.

“The Quebec government has announced it is considering the possibility of suing Air Canada to ensure that maintenance work remains in the country. The government says its Justice Department lawyers are assessing the grounds for a lawsuit aimed at forcing the airline to continue using Aveos, which has plants in a number of Canadian cities.”

“A wheelchair-bound three-year-old in a cast travelling with his family to Disney World in Orlando, Florida got the scare of his life when he was subjected to a thorough invasive pat-down by TSA agents at the O’Hare Airport in Chicago.”

“New analysis of a photo taken in 1937 has led investigators to think it might show a piece of the landing gear from aviator Amelia Earhart’s Lockheed Electra plane, which disappeared in June that year somewhere in the South Pacific. And at the State Department today, Secretary of State Hillary Rodham Clinton and other officials gathered to announce that a privately funded search effort led by the International Group for Historic Aircraft Recovery (TIGHAR) will be going to the Pacific island nation of Kiribati in July to see if they can find any evidence of the aircraft, Earhart and navigator Fred Noonan.”

“B.C.’s Health Minister Michael de Jong announced Tuesday that the province will ban the use of commercial tanning beds by anyone under 18 to reduce the chances of developing skin cancer later in life. With the announcement, B.C. joins Nova Scotia as the only provinces to ban minors from using tanning beds.”

“A daily aspirin may cut your risk of cancer, new research suggests. But doctors advise that there’s no reason for everyone to start taking it — at least not yet… Patients who took daily aspirin were 36 percent less likely to be diagnosed with metastatic cancer, or cancer that had already spread throughout their body. Additionally, individuals taking aspirin for five years or more were 15 percent less likely to die from cancer.”

“According to a study published in the journal Psychological Science, a wandering mind is a sign of a strong working memory, which in turn is a sign of intelligence. The researchers found that participants with higher working memory capacity reported more mind wandering in undemanding mental exercises. But despite their lack of focus, the daydreamers didn’t do worse on the tasks.”

I did have quite the vivid imagination growing up. ;)

“Apple Inc.’s new iPad runs “significantly hotter” than the earlier model when conducting processor-intensive tasks such as playing graphics-heavy games, according to Consumer Reports, which tested the device. The newest version of the market-leading tablet computer ran as hot as 116 degrees Fahrenheit (47 degrees Celsius), the magazine said on its website… The new device operates ‘well within our thermal specifications,’ Trudy Muller, a spokeswoman for Cupertino, California-based Apple, said in a statement. ‘If customers have any concerns they should contact AppleCare.'”

“Our list of the 100 best iPad apps focuses on native iPad apps (not iPhone apps running in 2X mode) that deliver unique and compelling tablet-based experiences all their own.”

“Amazon.com Inc said on Monday it agreed to buy Kiva Systems Inc for $775 million in cash, a deal that will bring more robotic technology to the e-commerce company’s giant network of warehouses… Kiva develops robots that zip around warehouses, grabbing and moving shelves and crates full of products. The technology helps retailers fulfill online orders quickly and with fewer workers. Companies including Gap Inc, Staples Inc and Crate & Barrel, have used the technology.”

Only a matter of time until the robots take over.

“The latest in the everyone-sue-everyone patent war is an alleged infringement by Samsung and Research In Motion for installing emoticon shortcut menus on their mobile phones… A firm called Varia Holdings began the process of suing both cell phone makers on Thursday for using its “emoticon input method and apparatus” patent, reports Ars Technica. The company asserts that it owns the idea of pop-up emoticon menus, which let users easily insert a happy or frowny face without having to type out the characters one at a time.”

Lol wow. You can really sue for anything these days.

“Good news for those who get separation anxiety every time they have to leave their game of World of Warcraft: there may be a mobile version in the future.”

“Nagoya University and Fujitsu have created software they say can automatically identify situations in which one party might “overtrust” the other. It does so by detecting changes in voice pitch and volume level that can occur under psychological duress. By combining this technology with keywords such as “indebtedness” or “compensation” that are characteristic to a specific type of remittance-soliciting phone phishing scam called furikomesagi, the researchers have developed a setup that’s now being tested in collaboration with the National Police Agency of Japan and the Bank of Nagoya.”

“A year after launching a controversial paywall, the New York Times says it has nearly half a million paying subscribers for its flagship paper. It also says it will make it harder for people to read on the Web without paying up. The Times is cutting back on the number of “free” articles it lets nonsubscribers read, from 20 a month to 10. The change goes into effect in April.”

My stance on paywalls remains – hate them. My visits to the New York Times page will continue to dwindle.

“In their efforts to vet applicants, some companies and government agencies are going beyond merely glancing at a person’s social networking profiles and instead asking to log in as the user to have a look around. ‘It’s akin to requiring someone’s house keys,’ said Orin Kerr, a George Washington University law professor and former federal prosecutor who calls it “an egregious privacy violation.'”

This topic’s been coming up a lot lately. Bad. It’s bad!!

“What’s the first thing most lottery winners buy straight after they strike it rich? According to one survey cited by the Mirror Online, winners buy washing machines, followed by couches. It turns out, winning the lottery doesn’t necessarily reward the winner with a “rich person” mentality.”

Then how come we hear of all the people who blow away their lotto winnings on extravagant things? Man… if I won the lottery all of my purchases/investments would be very wise. 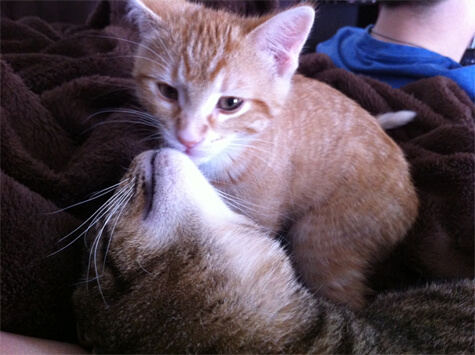 Linda Hoang is a Canadian blogger based in Edmonton, Alberta, who writes about travel, food lifestyle and pet topics. She's also a seasoned social media/digital strategist with a journalism background. Linda loves exploring the world with her husband Mike, eating their way through cities, supporting local businesses, and photographing Instagrammable Walls. She is the founder of the Edmonton International Cat Festival and a fur-mom to two cats and two dogs.
PrevPreviousClicks of the Day: Monday, March 19, 2012 Edition!
NextClicks of the Day: Wednesday, March 21, 2012 Edition!Next