“Nearly one in 10 Alberta men believes it’s OK to physically assault a woman if she does something to make him angry. That’s one of the startling findings of a recent survey examining men’s attitudes toward domestic violence. And while the survey results indicate awareness about domestic violence is on the rise in Alberta, it also makes it clear the province still has a long way to go.”

And really, what about the people who think it’s okay but just lied in the survey? Sad. Domestic violence is not okay.

“Edmonton police are warning businesses in the area of a billing scheme that falsely uses the Yellow Pages directory. Police say the scheme targets businesses with an invoice that deliberately features the “walking fingers” logo of the familiar Yellow Pages.”

Don’t fall for it guys!

“A series of heartwrenching text messages is being used by the boyfriend of a car accident victim to warn people to pay attention when driving. Mathieu Fortin has created a Facebook page to get the word out in memory of Emy Brochu, who died Jan. 18 when her car slammed into the back of a tractor-trailer truck as it merged with traffic near Victoriaville, Que.”

Another example of the dangers of distracted driving.

“While Canadian pediatric dentists wage a war against tooth decay in kids’ teeth, British officials are pointing a finger at sugary fruit juices as the culprit. On Monday, the Royal College of Surgeons in the United Kingdom warned parents that feeding children large amounts of juice, in an attempt to make kids eat more fruits, is damaging teeth.”

That sucks, I love juice!

“A new study by the conservative think tank organization the Manning Centre found that an overwhelming majority of Canadians find their public officials ‘unprincipled,’ ‘dishonest,’ ‘lazy’ and ‘incompetent.'”

I don’t think this is really news to anyone, lol.

“Women who are fed up with their jobs may be more likely to turn to food for comfort in times of stress, according to a Finnish study. The study, reported in the American Journal of Clinical Nutrition, found that those who reported work burnout were also more likely to have a habit of “emotional” eating, or eating when stressed, anxious or down, rather than just hungry.”

Well I eat a lot but I wouldn’t say it’s because I’m stressed, I just love food, lol.

“Hamburgers and hot dogs are getting even more grilling. A new study indicates that eating unprocessed red meat (hamburger, pork, roast beef, lamb) and processed meats (bacon, hot dogs, bologna, sausage) may increase a person’s risk of premature death and raise their risk of death from heart disease and cancer.”

But meat is sooo good…

“Aside from the erratic weather Canadians across the country have endured these past few seasons, there are others signs that global warming is taking effect. Here are 5 things that warn of global warming heating up our neck of the woods.”

Also could be titled “5 signs that the end of the world is coming” lol.

“The mother of Julian Assange, the founder of the whistleblowing website WikiLeaks, has warned that her son is being framed over sexual assault allegations.”

That was the first thing I thought when sexual assault allegations against him arose after all of the documents/information Wikileaks leaked. It makes a whole lot of sense if he is being framed for it. Corruption is everywhere…

“One Facebook engineer says she wants to get more women into tech. But why aren’t there any women on the company’s board? “You look in the room, you see all men, you assume that’s for men, not me… That’s why I think Facebook can make a difference. Teenage girls are using Facebook, and so I think it’s meaningful for them to hear about women engineers working at Facebook.” But there’s just one problem with this: Facbeook might have some women engineers — but it still doesn’t have any women on its board. In fact, just last month, numerous folks took Facebook to task for its board’s total lack of gender diversity. CalSTRS made a public demand for more women on the board, as did former Xerox CEO Anne Mulcahy.”

Let’s get to it women!

“Even the unartistic can have a blast playing Draw Something. Step up your game with these four tips.”

Not the most hard-hitting article but let’s face it. Draw Something is huge right now and this article is going to get clicks!! (My work is definitely more chicken scratchy than it is artistic lol).

“On Friday, AOL notified more than 40 employees from its West Coast offices that they would be out of jobs by the end of the month. More cuts are scheduled in the coming weeks across AOL… The AOL Instant Messenger group took the deepest cut so far. A former AOL employee said the group was ‘eviscerated and now only consists of support staff.'”

“Some people pursue celebrity. Others stumble into it as they are rushing off to bridge club. My 85-year-old mom, Marilyn Hagerty, a newspaper columnist, is in the latter category… The only downside of the world’s belated discovery of my mom is that she is too busy being interviewed on national television to play online Scrabble with me. Mom, if you ever get time to read this, it’s your move.”

“A town in Wyoming advertised as the smallest in the U.S. is up for sale next month. Buford, located between Cheyenne and Laramie in southeast Wyoming, has just one resident, Don Sammons, who has run the Buford Trading Post for the past 20 years, The Associated Press reported. Sammons told the AP he plans to retire and move on. The auction is set for noon on April 5.”

Including “a pleasant work environment” – “recognition” – “mentoring” and more!

It’s not just about the money ;)

“In northeast China last Sunday, a 9-year-old girl gave birth to a healthy 6-pound baby boy… Sadly, she is not the youngest girl to deliver a baby, according to other published reports. Two girls in Peru, ages 5 and 8, are both on record as giving birth to children of their own.”

My recap of attending a Storage Wars auction :)

“Two new trailers are out for The Hunger Games, and once again, they are mercifully not too revelatory, sticking to scenes from the first act.” 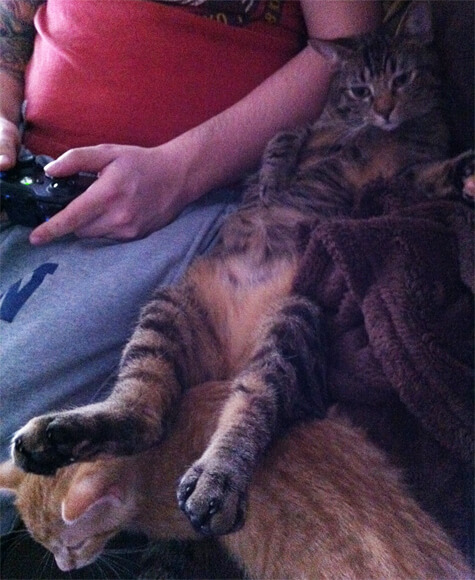 Linda Hoang is a Canadian blogger based in Edmonton, Alberta, who writes about travel, food lifestyle and pet topics. She's also a seasoned social media/digital strategist with a journalism background. Linda loves exploring the world with her husband Mike, eating their way through cities, supporting local businesses, and photographing Instagrammable Walls. She is the founder of the Edmonton International Cat Festival and a fur-mom to two cats and two dogs.
PrevPreviousRecap: Storage Wars Edmonton
NextClicks of the Day: Wednesday, March 14, 2012 Edition!Next