“@CstPower: “Drunk fight: ‘… she had a knife.’ ‘Ok, what did the knife look like?’ ‘It doesn’t matter.’ ‘…?’ They fight & I get the headache #eps” You don’t often get to hear those kinds of comments from members of the Edmonton Police Service. In fact, you often won’t interact much at all with officers unless you’ve been a victim of a crime or have committed a crime. But that’s all very different these days thanks to social media (specifically, Twitter).”

“One of three armoured car guards shot and killed during a robbery is being laid to rest in the dress she was married in just two months ago. The family of Michelle Shegelski told mourners at her funeral Tuesday that they chose the dress because her wedding day was the happiest day of her life.”

May she rest in peace…

“On Tuesday, the board decided to review the system, and take another look at how students are graded, and whether the no-zero policy is the right one.”

It should definitely be reviewed.

“Stoking the flames of a long-standing Alberta rivalry, an Edmonton rock station is selling T-shirts emblazoned with the words “Calgary sucks” to mark 20 years on the air. FM station 100.3 The Bear is printing the $20-tees featuring such trenchant Cowtown criticisms as “not the capital of Alberta,” and “fake cowboys.”’

“A majority of Canadians continue to object to the federal Tories and disapprove of their boss, according to national poll numbers released by an Ottawa-based research firm. Most participants in a recent poll by Abacus Data – 49% – disapproved of the Harper government, while 34% approved.”

“Senator Patrick Brazeau apologized Tuesday evening for telling a reporter over Twitter that she should change her name to “Bitchburn,” after she reported that he had the lowest attendance record in the Red Chamber between June 2011 and April 2012… Late Tuesday afternoon, a message appeared on Brazeau’s Twitter account, @TheBrazman, saying: “@jenditchburn while u smile Jen, others suffer. Change the D to a B in your last name and we’re even! Don’t mean it but needs saying.””

“Rescue crews should be able to safely sift through the rubble of the collapsed Ontarioshopping mall as they search for survivors despite fears of a further collapse, says an engineering expert, if they work slowly and continue to secure the structure as they remove debris.”

It was pretty sad when they called off the rescue the other day but good for public outcry for resuming it… Hope they find survivors (and hope no rescuers get hurt).

“The 72 hour sweep conducted by the FBI and local police departments took 79 child prostitutes off the street and resulted in the arrest of more than 100 pimps. Yesterday, the FBI announced the latest coordinated child prostitution sweep had concluded.”

“Turkey warned Tuesday that any Syrian military unit approaching its border will be treated as a direct threat, a serious escalation in tensions days after Syria shot a Turkish military plane out of the sky.”

“For every day of the year, there’s an Alberta baby born brain-damaged because his or her mother drank while pregnant.”

“Ask around and chances are good you know someone who is taking antidepressants to calm nagging worries, sedatives to sleep, or someone who keeps a quiet stash of some kind of “mother’s little helper” to quickly calm them… Dr. Peggy Richter, the director of Sunnybrook Hospital’s Clinic for OCD and Related Disorders in Toronto, believes anti-anxiety medications are often mis-prescribed.”

“Twitter isn’t just a sounding board for the latest news headlines or funniest memes. It can also be used as a command system for the home devices you use every day — from your coffee pot to your washing machine.”

“A Barrie homeowner is reeling after a message posted online to Twitter attracted hundreds of strangers to what was supposed to be a modest party at her house. Approximately 200 teenagers showed up at Diane Glenn’s house Saturday and proceeded to smash beer bottles, torment the family dogs and smear paint on furniture. Some revellers stole jewelry and prescription drugs, while others broke cabinets and stair posts. By the end of the night, the partiers had caused an estimated $40,000 in damage.”

“According to the CEO of online travel agency Orbitz, people who use Apple’s line of Mac computers not only spend more per night on hotels, they’re also more likely than their PC counterparts to book rooms in classier establishments.”

Strange study to commission in the first place, lol.

“Rogers Communications Inc. (TSX:RCI.B) will eliminate 375 jobs, a move that comes as the wireless, cable and Internet provider cuts costs in the face of lower profits and tougher competition on all fronts. The staff reduction is part of a cost-cutting strategy announced earlier this year and include employees in the business, wireless, and cable and Internet divisions. They follow 300 job cuts announced in March.”

“The human brain is predisposed to racism because areas that detect ethnicity and those controlling emotion are tightly connected, with fear often the overwhelming thought.”

“A new study by University of Bristol biologists shows that if a piece of research is packed full of mathematical equations, other scientists tend to ignore it.”

“From Cape Hatteras, N.C., to just north of Boston, sea levels are rising much faster than they are around the globe, putting one of the world’s most costly coasts in danger of flooding, government researchers report.”

Disaster after disaster is in our future, I’m sure. Not to be pessimistic or anything~

“Some say love is blind, but can it smell?That’s the question put to the test at ‘pheromone parties’ — a new dating movement… These parties — which the Associated Press reports have appeared in several cities around the country including New York and Los Angeles — ask that singles submit a worn T-shirt, and then allow other participants to have a sniff. If the smell is intriguing, then a photographer takes a picture of them with the shirt and sends it to a projector so the chemically-appealing participant can come forward.”

“It seems that authorities in Maine are not taking any chances. Just weeks after the federal government publicly denied the existence of zombies, emergency officials in Maine have run a training exercise in preparation for a zombie apocalypse… In Bangor, approximately 100 emergency responders from eight different counties participated in the event.”

It should be taken seriously!

“Kate Middleton may be the future Queen, but the Duchess of Cambridge has been advised that she will be expected to show her respect and curtsy to “blood” Princesses Beatrice and Eugenie.”

“Britain’s famous parliament clock tower is to be renamed Elizabeth Tower in honour of the queen’s diamond jubilee, officials have announced.”

I think that is weird. I will always refer to it as Big Ben! 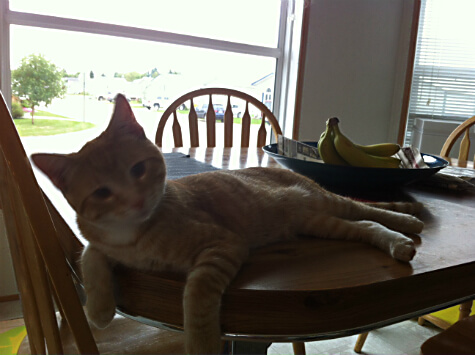 Ever the curious looking Loki, hanging off the table. :)

Linda Hoang is a Canadian blogger based in Edmonton, Alberta, who writes about travel, food, lifestyle and pet topics. She's also a seasoned social media/digital strategist with a journalism background, the founder of the Edmonton International Cat Festival and co-founder of Stop Race Based Hate, an online anti-racism education tool. Linda loves exploring the world with her partner Mike, eating their way through cities, supporting local businesses, and photographing Instagrammable Walls. Linda is a fur-mom to two cats and two dogs.
PrevPreviousSocial Media Column: Edmonton police tweet too
NextReview: The Mad Platter BistroNext