“A pre-dawn twister flattened entire blocks of homes in a small Illinois town Wednesday as violent storms ravaged the Midwest and South, killing at least 12 people in three states.”

We’re at the mercy of natural disasters. Sad! Meanwhile…

“A tornado the size of Earth blasting winds of 300,000 mph sounds like the stuff of disaster movies, but it’s real and it happened earlier this month. But before Oklahoma contemplates how to build a shelter to withstand that kind of tornado, don’t worry it was on the sun.”

“About a dozen offers to adopt a husky that killed a newborn baby in suburban Calgary earlier this month have come in from dog lovers across Canada… ‘To get phone calls from people from Ontario and Winnipeg and other parts of the country — this story obviously went national. It’s interesting to hear from all the concerned people who would like to take the dog instead of having it euthanized.'”

I hope the dog doesn’t get euthanized. I’m glad I’m not the only one.

“Disneyworld is under fire for a new exhibit that was designed to encourage kids to make healthy choices, but a lot of people say the exhibit is insensitive… Habit Heroes opened less than a month ago, but after public outrage online Disney has now closed the attraction. The Canadian Obesity Network says it never should have existed in the first place. ”

“It seemed like the perfect setup–give kids video games that would motivate them to get off the couch and start moving. Not only would they have fun, they would also get healthier. However, these high hopes may have been wishful thinking. According to a new study by Baylor College of Medicine in Houston, Texas, kids given “active” video games showed no more overall physical exertion than kids who used only their thumbs to play.”

That kind of sucks. And totally ruins the marketing for Wii Fit and Kinect fitness games, lol. But how could it not when people are sweating and everything? Feels like fitness DVDs don’t work then.

“Wanted: Food blogger. Pays $50,000 for a year, plus a daily dining-out stipend for two. Tourism Richmond has put out the call and believe it or not, it’s for real. Before every single soul who reads this quits their job and applies, think about it. The job requires 365 consecutive restaurant meals. Yay! you say? Regardless, applicants should have a hummingbird metabolism. And to further combat a bulging middle section, Tourism Richmond will throw in a year’s membership to the Richmond Olympic Oval’s fitness centre.”

“On Sunday, we saw television networks try to use hashtags around two annual one-of-a-kind events. One of them succeeded; the other did not. We’re learning that creating and promoting a hashtag is just the beginning. What may matter more is when and where you use it.”

I think The Voice does an excellent job utilizing hashtags and showing judge tweets’ at the right times, etc.

“The Far East government is known for strict censorship when it comes to social networking, but this week its citizens caught onto a glitch in the system and glimpsed an uncensored world.”

“Some major airlines are already raising their ticket prices in response to the higher cost of fuel, and experts predict these higher prices could stick around even if the price of gas creeps down.”

“Planet hunters are right on the verge of finding a world beyond the sun where life could plausibly exist — a planet more or less the size of Earth, with balmy temperatures and enough water to sustain biological activity… A team at Princeton and the Jet Propulsion Laboratory (JPL) now proposes to work a similar optical trick by flying a giant “starshade” in space, positioning it tens of thousands of miles away from a big orbiting telescope and covering up just enough stellar light to make a planet pop into view.”

“Authorities initially ruled out arson, saying that friction or smoldering lightning damage may have started the fire. But they’ve now ruled it right back in, arresting 26-year-old Sara Barnes for lighting the Senator on fire while sitting inside it doing meth.”

“Fossil hunters have uncovered the remains of giant Jurassic fleas that sucked the blood of ancient beasts more than 100m years ago… The insects resemble modern fleas in many respects, but grew to between five and ten times their size, with some females reaching more than 2cm long.”

“Miller’s birthday bash is one in a series of events springing up coast to coast for those who come of age a little slower than the rest. Social media and dedicated leap year websites have allowed the comparatively small community to join forces and put on the celebrations they often felt they were missing out on growing up.” 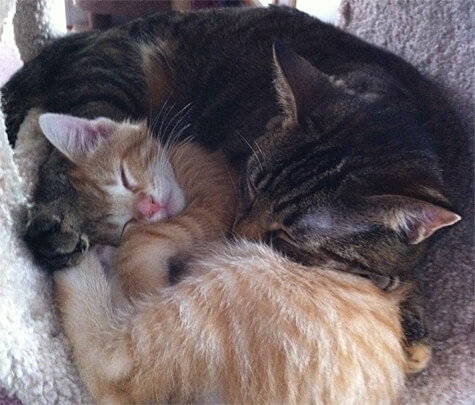 Linda Hoang is a Canadian blogger based in Edmonton, Alberta, who writes about travel, food lifestyle and pet topics. She's also a seasoned social media/digital strategist with a journalism background. Linda loves exploring the world with her husband Mike, eating their way through cities, supporting local businesses, and photographing Instagrammable Walls. She is the founder of the Edmonton International Cat Festival and a fur-mom to two cats and two dogs.
PrevPreviousReview: Mikado
NextClicks of the Day: March 1, 2, 3 2012 Weekend Edition!Next