This article is from 2008 but TIME’s Twitter linked it today because it was not the most viewed article on their website today! Bizarre.

“A Nebraska jail has discovered that cats bring out the softer side of inmates and the jailbirds love their new feline friends.” SO CUTE.

Lol hilarious. I hated her in Gossip Girl.

“Restoring these historic identities is a way of reconnecting today’s men and women in uniform with the proud history and traditions that they carry with them as members of the Canadian Armed Forces.” They never should have changed the names in the first place then lol, I mean the ‘RCMP’ are still the ‘Royal Canadian’ etc. Sounds good to me though!

It appears to be quite the backa and forth patent lawsuits between these two, lol.

This is NOT cool! Hate. Paywalls.

I got to get mine soon!

Hooray! I knew this all along. You can’t just have people work every second of their day, they would burn out so quickly lol. Mindless Interwebz surfing provides a nice productive balance!

Poor hedgehog :( We humans destroy everything.

“When every 3 minutes of television watching is taking a minute off the end of your life, scientists everywhere agree: you’d better be watching something awesome.” I find there’s a lot of health articles about how TV is killing people but then I saw a counter-article once that said, actually – the chances of me dying are reduced when I’m at home watching TV. I’m not driving and therefore can’t get into a car accident. I can’t randomly get stabbed or shot downtown or trip and bonk my head on the concrete sidewalk …. etc., etc. Fair points? But if these ‘TV is killing you’ stats are all true then yes I guess I’m not going to be living very long? lol

Cool but also sign of the end of the world? LOL.

Bad news for Mike, I can be rather stressy. lol.

AWESOME!! So excited for this movie!! I hope there’s Thor photos next!

Cool stunts. Really great shots. Not really anything funny or mindless though which is what I like with my Today’s Big Thing videos, lol. 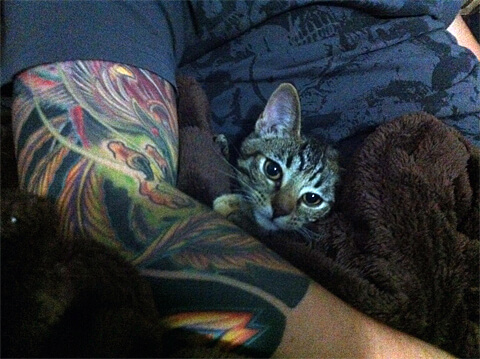 She’s so precious and wittle.

Linda Hoang is a Canadian blogger based in Edmonton, Alberta, who writes about travel, food lifestyle and pet topics. She's also a seasoned social media/digital strategist with a journalism background. Linda loves exploring the world with her husband Mike, eating their way through cities, supporting local businesses, and photographing Instagrammable Walls. She is the founder of the Edmonton International Cat Festival and a fur-mom to two cats and two dogs.
PrevPreviousClicks of the Day: Monday, August 15, 2011 Edition!
NextClicks of the Day: Wednesday, August 17, 2011 Edition!Next