“There will be fewer detour signs around Edmonton this summer as the city’s road construction boom comes to a screeching halt. Only $123 million is being spent this year on 47 jobs, including bridge upgrades and paving collector and major arterial roads, as well as growth projects, says Barry Belcourt, road design and construction branch manager. Last year, there were three times the number of projects and, at $345 million, almost triple the budget.”

“Edmonton police are being criticized after the identity of a 16-year-old girl wanted on an outstanding criminal warrant was accidentally posted on a police website and released to the media… In a statement released Tuesday afternoon, the EPS says they regretted the incident, saying it should not have occurred.”

“”The Capital View” continues Tuesday, with a look at what a Wildrose government would mean for Edmonton. Danielle Smith believes her candidates are getting incredible reaction from Edmontonians. Smith says her party’s 10-10 plan gives municipalities the resources they need to take care of the issues that matter to them. ‘Our commitment to municipalities, that would flow through ten per cent of provincial tax revenues and ten per cent of budget surpluses, is going to result in significantly more dollars going down to the municipal level to be spent local infrastructure needs.'”

Conservatives “Capital View” yesterday, NDP tomorrow! Make sure you’re informing yourself on what all the parties are offering and get out there and vote!

“The Conservative government is publicly underestimating the cost of Canada’s plan to buy next generation stealth fighter jets by at least $9 billion, according the auditor general’s spring report tabled Tuesday. Internal estimates from the Department of National Defence dating back to 2008 peg the cost of purchasing 65 F-35 fighter jets at $25 billion, despite the fact that the government has publicly put the price tag closer to $16 billion.”

“Representatives of Canada’s electronic surveillance agency and national police force were called before a Commons committee Tuesday to tell politicians all they know about threats posted by online hacker group Anonymous against Public Safety minister Vic Toews. And the answer is: Not much.”

“Mr. Goh, who was born in South Korea… felt disrespected by teasing about his poor English skills at the Oakland school — a college founded as a safe place where Korean immigrants could adjust to a new country and build new careers. So, he bought a gun and a few weeks later took his revenge, opening fire at the college on Monday in a rampage that left six students and a receptionist dead and wounded three more, authorities said.”

“Tornadoes tore through the Dallas area on Tuesday, tearing roofs off homes, tossing trucks into the air and leaving flattened tractor trailers strewn along highways and parking lots.”

I would simply not live in “Tornado Alley.” Far too risky.

“A vaccine delivered in an injection or nasal spray to prevent heart attacks could be available within five years. Scientists have discovered that the drug stimulates the body’s immune system to produce antibodies which prevent heart disease by stopping fat building up in the arteries. It is the first time that the underlying cause of heart disease has been targeted. Current treatments focus on using drugs to reduce cholesterol levels and blood pressure.”

“If eating breakfast isn’t part of your regular schedule, consider rethinking your morning routine. Eating breakfast – versus skipping it – has been linked with a healthier weight, improved memory, lower cholesterol and a more nutritious diet. But there’s another reason to eat breakfast every day, particularly if you’re male. According to a new study published online last week, men who routinely missed breakfast had a significantly greater risk of developing type 2 diabetes. And men who ate only once or twice a day were also at increased risk for the disease.”

Good thing Mike loves his morning cereal! I’m personally not a breakfast person (unless it’s going out to a restaurant to have it lol) though I should probably change my ways.

“The U.S. maker of the famous Barbie franchise will release a doll next year that is bald in support of children who have cancer and lose their hair in treatment, a Mattel spokesman said Tuesday. The decision to launch the new doll, which Mattel described as “a friend of Barbie,” was made after a massive Facebook appeal drew over 157,000 supporters to the cause of urging the doll-maker to consider a version for sick kids.”

Impressive that this came to fruition.

“Half of preschoolers don’t spend time playing outside with a parent each day, according to results from a recent survey. In interviews with parents of close to 9,000 kids, less than half of moms and only a quarter of dads reported taking their child for a walk or playing with them in the yard or park at least once a day.”

My parents certainly never had any time to play outside with me lol. I think I turned out okay but for my future children I hope to make the outdoors a bigger part of their lives!

“If I were going to describe the perfect contraceptive, it would go something like this: no babies, no latex, no daily pill to remember, no hormones to interfere with mood or sex drive, no negative health effects whatsoever, and 100 percent effectiveness. The funny thing is, something like that currently exists. The procedure called RISUG in India (reversible inhibition of sperm under guidance) takes about 15 minutes with a doctor, is effective after about three days, and lasts for 10 or more years.”

“The stage between preschool and kindergarten marks the point at which little kids are no longer considered unbearably adorable. Or at least that’s what the research shows.”

Lol pretty funny. Side note: I don’t care what anyone says… not all babies are cute!!

“Imagine a single supercomputer able to out-perform 50 million laptops, and capable of performing a staggering one quintillion (billion billion) operations per second. Expect that supercomputer to be operating this decade, experts say.”

“Instagram announced Tuesday that it has finally published its Android application to the Google Play market. The wildly popular photo app has quickly wormed its way into the artsy hearts of iOS lovers but had not yet been available on Google’s smartphone platform. The app works with Android versions 2.2 (Froyo) and above, and allows sharing to Facebook, Twitter, Tumblr and Foursquare. Support for Flickr, the app’s marketplace site says, is “coming very soon.””

“If you cringe when you check your bank account balance after pay day, consider this: Canada ranks 12th in the world for having the highest wages… The calculations showed that the average wage earner makes about $1,480 a month, which is less than $18,000 USD a year. In Canada, the average monthly wage is $2,724.”

Well no one wants to eat pink slime. They shouldn’t have been producing this in the first place.

“Men, hear this: The world needs picky females. When it comes to mating, the choosy ones keep a species alive and thriving. “This is an important message because it changes the sexual selection process of evolution from a backseat role to the driver’s seat,” explains Leithen M’Gonigle, lead author of a study published online this week in Nature. At least, that is, with fish, birds and insects.”

“Justin Trudeau’s boxing victory and the federal budget dominated political headlines this week, but “This Hour Has 22 Minutes” isn’t ignoring the Alberta election. They’re paying attention to the heated battle between Conservative Premier Alison Redford and Wildrose Leader Danielle Smith — even though they can’t tell the difference between the two women.”

“A flying car is being unveiled this week at the New York Auto Show, and we can’t help but wonder: If the roads are jam-packed with crazy drivers now, what would it be like if they all had flying cars? The manufacturer, Terrafugia of Woborn, Mass., reports that it’s already received more than 100 preorders for its flying car — the Transition. The $279,000 dual-use vehicle sports folding wings and rugged, all-terrain wheels that will allow it to transition smoothly from the driveway to the roadway to the runway and beyond.”

I’ll stick to the ground for now but it’s only a matter of time until we’re all just zipping around up there!

“Canadians are a cheery bunch — but Quebecers are the cheeriest of us all, according to a new United Nations report on the state of global happiness. The first-ever World Happiness Report revealed that the last 25 years have been especially satisfying for francophone Quebecers, compared to Canadians in other provinces. As a country, Canada ranked fifth behind a quartet of northern European nations — Denmark, Finland, Norway and the Netherlands, in that order — but well ahead of the United States and the United Kingdom, which ranked 11th and 18th, respectively out of 156.”

I do feel like we’re all pretty happy go lucky people :)

“When it comes to Canadian sugar daddies, the enterprising young lady has a choice between quantity and quality. Toronto has the most sugar daddies per capita, but Victoria has the most generous ones, according to data compiled by a website that matches older, rich men with younger, attractive women willing to exchange, um, company for presents. The average Canadian sugar daddy is 40 years old and makes about a quarter of a million dollars a year.”

Yuck. Marry for love, not money.

“A man who escaped from a massive fire at an apartment in Moose Jaw, Sask., says he might not be alive today if it wasn’t for his cat, Chloe. Shawn Delorme says he was fast asleep and might have perished if the calico kitty hadn’t leapt on his pillow, meowed loudly and scratched his face.”

Gotta love cats! Also I love how I was browsing through all the different articles about this topic and all of them were basically ‘fire destroys centurys’ old building, firefighters fight blaze, etc. etc.’ and then there’s this one – ‘Cat Saved Me’ lol.

“Although cats and roosters don’t always get along, this kitty is quite enamored with his avian pal.”

“Meet Marshmallow, a wisp of a kitten born March 1.” 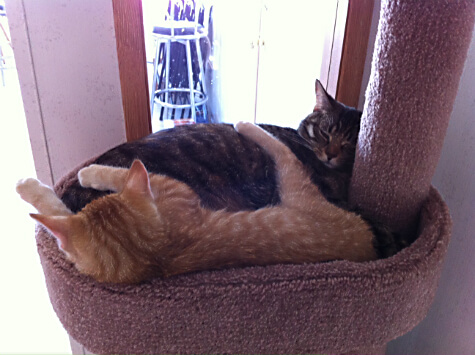 Not enough space in there for both of them really but Loki likes to get close, lol.

Linda Hoang is a Canadian blogger based in Edmonton, Alberta, who writes about travel, food, lifestyle and pet topics. She's also a seasoned social media/digital strategist with a journalism background, the founder of the Edmonton International Cat Festival and co-founder of Stop Race Based Hate, an online anti-racism education tool. Linda loves exploring the world with her partner Mike, eating their way through cities, supporting local businesses, and photographing Instagrammable Walls. Linda is a fur-mom to two cats and two dogs.
PrevPreviousClicks of the Day: Monday, April 2, 2012 Edition!
NextNew Layout!Next