“The two satellites, Landsat-7 and Terra AM-1, had been interfered with on four separate occasions, allowing the attackers to be in command of the satellites for two to over twelve minutes each time.”

Those particular satellites weren’t a huge deal but this could prove very bad if they got access to some major ones :o

“A selection of food and drink is available in 24 boxes. Each box has a hashtag – simply send a tweet containing the hashtag for the snack you want.”

“Today we are happy to announce the launch of Shoebox by 1000memories, the fastest way to scan old paper photos and share them with family and friends. This is the first mobile scanner of its kind—designed specifically to scan and record artifacts from the past.”

No more hassle of a gigantic scanner? Awesome! Looking forward to trying this out.

“Slow-motion footage, X-ray images and computer simulations have shed light on how woodpeckers avoid injuries to their brains as they peck.”

In case you were wondering!!

“Wednesday morning, Seattle area residents were treated to this spectacular sunrise as the first rays of light hit Mount Rainier before reaching the sky. The cloud cover provided the perfect canvas for Rainier’s shadow, making it almost seem like a smoking volcano.”

Woot. All for this advancement in education~

“The company has no plans to advertise the ketchup and are banking on the power of social media to get the word out.” 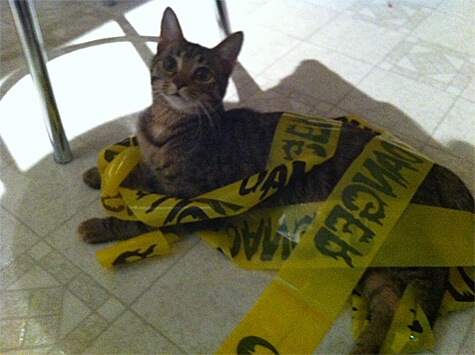 Thor getting in our decorations :)

Linda Hoang is a Canadian blogger based in Edmonton, Alberta, who writes about travel, food, lifestyle and pet topics. She's also a seasoned social media/digital strategist with a journalism background, the founder of the Edmonton International Cat Festival and co-founder of Stop Race Based Hate, an online anti-racism education tool. Linda loves exploring the world with her partner Mike, eating their way through cities, supporting local businesses, and photographing Instagrammable Walls. Linda is a fur-mom to two cats and two dogs.
PrevPreviousClicks of the Day: Wednesday, October 26, 2011 Edition!
NextFeature Story: Edmonton couple resurrecting Halloween Alley from the deadNext