“The research, published this week in the journal Pediatrics, is the first of its kind to demonstrate a link between youths’ exposure to cursing in the media and aggression — both physical and relational.”

“But the bizarre case of Terry W. Thompson, who claimed to love exotic animals but all but signed their death warrant when he threw open their cages Tuesday and then took his own life, is far from over. Law enforcement officers are grappling with the aftermath on several troubling fronts.”

I hate that all of this even happened. This is a good read on issues officers now face. I feel like if I were an officer and my orders were to execute one animal after another, I would say no. I didn’t sign up for something like that. Le sigh. Sad, sad story.

“Police are investigating allegations that dozens of students north of Montreal took part in an online plot to kill two teachers.”

Crazy story out of Quebec. Man, people these days…

“When Navy Seals killed Osama bin Laden in May, people criticized the government’s decision not to release the reportedly grisly photos of his corpse. And yet it’s worth pointing out that, at least as the news of Muammar Gaddafi‘s death in Libya emerged this morning, the pix in and of themselves did not immediately prove that it happened.”

Good read. What do you think? The picture made me sick. Definitely a – warning, disturbing content – kind of a photo. I can see all the reasons why it was ‘necessary’ to show the photo but I don’t think personally I would have needed it to really understand the story, lol.

“Gordon and Norma Yeager were happily married for 72 years before they died last week, just one hour apart, while holding hands.”

AW. #TRUELOVE to the very end.

“This app, designed for teenagers, allows parents to set up geofences and receive a text alert any time their child crosses a virtual boundary.”

“The social networking site can be used for mentoring, building relationships and can help prevent teen suicides, gang activity and even crimes.”

“A year ago, Epic Meal Time came into being, and somewhere in the world, pigs and cows sensed a presence in the force they hadn’t felt since humans discovered fire.”

Happy birthday Epic Meal Time! Your food is gross but the production value is quite well-done and entertaining. Plus, you’re Canadian!

“There will never be graffiti more creative and awesome than this.”

“The majority of Americans still do not have confidence in the mass media to report the news fully, accurately, and fairly.”

“A generation of solid economic growth has meant little in the everyday lives of most Canadians, according to a new index of wellbeing.”

“Reported today is the prosecution of 22 year old Los Angeles resident, Jesus Felix, who created — wait for it — 130 different Facebook pages in order to harass his 16 year old ex-girlfriend. Wow.”

“Thread veins, wrinkles, blotchy skin. The shocking photo created by forensic experts that predicts the price of your tipple.”

Good thing wine is not really my cup o’ tea.

“Londoner Tom Boddingham received this a gigantic 1,450 monster claw slipper from a Chinese manufacture who missed a decimal point in his order.”

“Alberta politicians will sit for two days when the fall sitting of the legislature begins Monday, then take a month-long break.”

Hurray!! Love seeing all of the construction projects wrapping up.

“The popular reality show “Storage Wars” follows people who bid on what’s inside old storage lockers, and now that premise has come to Edmonton.”

And I’ve decided I’m going to include a poll question with every Clicks of the Day now! :) Just for some more interactivity. Here’s today’s: 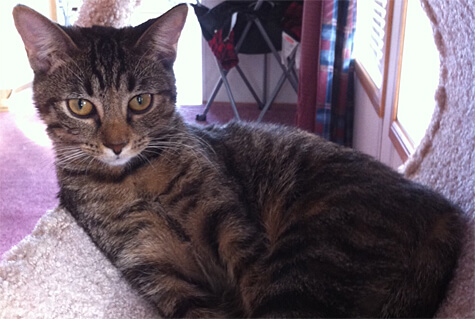 Ruler of the House~

Linda Hoang is a Canadian blogger based in Edmonton, Alberta, who writes about travel, food, lifestyle and pet topics. She's also a seasoned social media/digital strategist with a journalism background, the founder of the Edmonton International Cat Festival and co-founder of Stop Race Based Hate, an online anti-racism education tool. Linda loves exploring the world with her partner Mike, eating their way through cities, supporting local businesses, and photographing Instagrammable Walls. Linda is a fur-mom to two cats and two dogs.
PrevPreviousClicks of the Day: Wednesday, October 19, 2011 Edition!
NextReview: Edmonton Rocky Mountain Wine & Food Festival 2011Next