“Two weeks after an Edmonton high school teacher said he was suspended, Lynden Dorval told CTV News why it happened, and why he kept giving zeroes to some students, even after he was told to stop. Dorval teaches physics at Ross Sheppard Composite High School, and doesn’t agree with a directive called the ‘Behavioural Code System’ introduced at the school about a year and a half ago that was meant to replace marks of zero with assigning behaviour codes for formative assessments. ‘Our marks program doesn’t recognize anything that isn’t numerical,’ Dorval, a public school teacher for 35 years said. ‘So of course the student’s marks are only based on the work they have actually done. It’s just like in real life, there are always consequences for not doing things.'”

What kind of students are we shaping if we just let them breeze through school undeservedly?

“AHS officials said a case of Hantavirus Pulmonary Syndrome has been confirmed in a resident of a rural community located north of Edmonton, although officials would not release a specific location. The confirmation has prompted health officials to issue a warning not only to residents of the immediate area, but to all Albertans, to carefully handle cleaning up rodent infestations and protect themselves.”

“After a brief meeting with NDP leader Thomas Mulcair, Regional Municipality of Wood Buffalo Mayor Melissa Blake says the leader of the official opposition has some valid points about environmental sustainability, but the two agreed to disagree.”

“Back-to-work legislation for striking Canadian Pacific Rail workers cleared the Senate to become law Thursday, but Labour Minister Lisa Raitt is predicting it will take weeks to clear the backlog of freight once trains start rolling Friday morning. Some 4,800 locomotive engineers, conductors, yardmen and others walked off the job nine days ago, crippling the country’s biggest freight rail carrier.”

No one’s allowed to strike in this country, it would appear. Lol.

“Talks between the Quebec government and students have been suspended after four days of negotiations, prompting speculations about an early election in the province. However, Premier Jean Charest downplayed the vote’s imminence.”

“A large coffee costs close to $2, but the person pouring it was being paid $20 per hour plus an additional $8 for benefits and employers costs. In total, a cashier was earning an hourly wage of $28. The hospital coffee shop was paying its staff much higher wages than its counterparts because the people pouring the coffees and handing out doughnuts were Eastern Health staff. The average Tim Hortons employee usually gets paid the minimum wage or a little bit higher.”

They are better paid than I am!

“The man wanted on an Interpol warrant in connection with a murder and dismemberment investigation auditioned for a reality television show on OutTV five years ago.”

“North Korea proclaimed itself a “nuclear state” this week following a revision of its constitution earlier this year. Kim Jong-Il has “transferred the country into an undefeated country with strong political ideology, a nuclear power state, and invincible military power,” according to the updated constitution posted on its portal website Naenara. The website posted the revised constitution on Wednesday, according to Yonhap, the South Korean state affiliated news agency.”

“The number of newly diagnosed cases of gonorrhoea in England soared by 25% in 2011 amid fears that the sexual infection is becoming untreatable. There have been cases in Japan and Europe of infections that resist first-choice therapies. The Health Protection Agency said the threat of gonorrhoea was ‘very concerning.'”

“Men’s offices contained more than women’s, the researchers found. The arm rests of chairs and hand sets of phones had higher bacterial counts than desk tops or computer components — keyboards and mice. But germaphobes should relax. The findings, published in the journal PLoS One, are no surprise. Humans play host to swarms of bacteria all the time — on our skin, in our nostrils and mouths, and particularly in our digestive tracts. Where we are, they are.”

“New York City Mayor Michael Bloomberg is proposing a ban on the sale of large sodas and other sugary drinks in the city’s restaurants, delis and movie theaters in the hopes of combating obesity – an expansion of his administration’s efforts to encourage healthy behavior by limiting residents’ choices.”

“Are teens becoming more abstemious? A new survey shows dropping rates of drinking, drug use and smoking among Canadian teens.”

“Google has applied to control a slew of domain names that are not only related to its core business but have “interesting and creative potential.” The company announced on its blog on Thursday that it has submitted applications to the Internet Corporation for Assigned Names and Numbers (ICANN) for the following domains: .google, .youtube, .doc and .lol.”

I have been trying to use Google+ more…

“Google Inc unveiled major changes to its shopping business on Thursday that will likely prove controversial in the e-commerce world. Starting in the fall, product search results for users in the United States will be influenced by how much retailers and advertisers pay, a company executive said. In the past, product search results were based mainly on relevance and the program was free.”

That does make a difference.

“The three-year race to find a new generation of skilled oil and gas workers is on. No fewer than 9,500 jobs will need to be filled by 2015, according to a report by the Petroleum Human Resources Council of Canada, released Tuesday.”

“t won’t happen again in our lifetime, or our kids’ lifetime. Next week’s transit of Venus won’t be repeated until 2117. But we can see it for a couple of hours — if we are in the right place.”

“Lori Anne Madison, 6, stepped boldly Wednesday afternoon to the microphone, lowered it a bit to fit her height, and took on the word ‘ingluvies’ at the National Spelling Bee. The youngest person ever to compete in the bee stumbled on the term for a bird’s craw, spelling it ‘engluvies.'”

Good for her for making it into the bee in the first place! :) 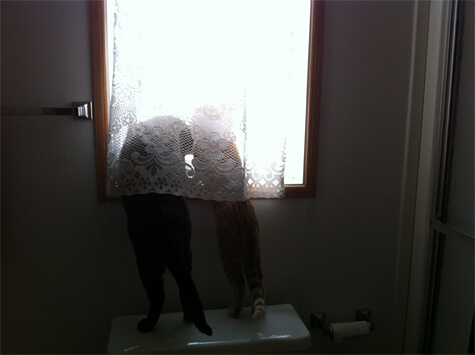 Thor and Loki looking out the bathroom window.

Linda Hoang is a Canadian blogger based in Edmonton, Alberta, who writes about travel, food lifestyle and pet topics. She's also a seasoned social media/digital strategist with a journalism background. Linda loves exploring the world with her husband Mike, eating their way through cities, supporting local businesses, and photographing Instagrammable Walls. She is the founder of the Edmonton International Cat Festival and a fur-mom to two cats and two dogs.
PrevPreviousPhoto of the Day: Thursday, May 31, 2012
NextPhoto of the Day: Friday, June 1, 2012Next