“Edmonton taxi drivers have voted 82 per cent in favour of a strike, but union officials say they will try to continue negotiations before walking off the job.”

“Retired Supreme Court Justice Jack Major defended his MLA pay report Thursday, saying he was asked to recommend a fair salary and benefits package for politicians, and did so. His critics include Premier Alison Redford, who refused to accept the suggested $335,000 premier’s salary, and opposition parties, who say a defined-benefit pension plan and tax breaks are too rich and too complex for Albertans to easily understand.”

“The Department of National Defence is cutting the jobs of medical professionals involved in suicide prevention and monitoring post-traumatic stress disorders — despite claims by DND and the Canadian Forces that dealing with such health issues is a priority. The move comes on the heels of a new report indicating that suicides have increased in the Canadian Forces.”

“The Canadian one cent penny will be no more as of this autumn. After the federal government decided to cease further production, the last penny will be produced Friday at a special coin strike ceremony at a Winnipeg plant.”

“Facebook on Tuesday unveiled an initiative to use the vast social network to help connect organ donors with people who need life-saving transplants. Facebook founder Mark Zuckerberg announced the initiative and became one of the first Facebook users to sign up to donate on the social network. Members of Facebook in the United States and Britain can now indicate that they are organ donors on their timelines, and if they are not donors, they can find links to official organ donation registries and instantly enroll.”

“There’s good news for joggers: Pounding the pavement can add years to your life. Jogging on a regular basis can extend the life expectancy of men by 6.2 years and women by 5.6 years, according to an assessment of data from the ongoing Copenhagen City Heart Study. But, better still, you don’t have to run to excess to reap the rewards. The analysis revealed that between one and 2.5 hours a week of running at a slow to moderate pace is enough to boost life expectancy.”

I’ll eventually start up my fitness regime again, I swear…

“More than 60 percent of young adults between the ages of 19 and 22 receive financial help from mom and dad, according to a new University of Michigan study. The average amount they receive—including help with college tuition, rent and transportation—is roughly $7,500 a year.”

That does seem accurate. I have to say Mike and my parents’ have really been great at helping us out.

“Research In Motion Ltd.’s stock has dropped roughly 15 per cent since the unveiling of its crucial BlackBerry 10 software on Tuesday, and hit an eight-year low Thursday on the Toronto Stock Exchange.”

“For the visually impaired community, the introduction of the iPhone in 2007 seemed at first like a disaster — the standard-bearer of a new generation of smartphones was based on touch screens that had no physical differentiation. It was a flat piece of glass. But soon enough, word started to spread: The iPhone came with a built-in accessibility feature… For its fans and advocates in the visually-impaired community, the iPhone has turned out to be one of the most revolutionary developments since the invention of Braille.”

“Adding to the existing rumor of a four-inch screen on the new iPhone is info obtained by Jeremy Horwitz of iLounge, who says not only will that screen be a larger 4 inches (measured diagonally), but it will have a new aspect ratio, which we would assume would be 16 x 9 — the same shape as typical HDTVs… As the story goes, the new iPhone is going to be taller than its predecessor, with dimensions of 125mm by 58.5mm by 7.4mm, according to iLounge… When will we see this new bauble from Apple? If the current rumor mill is correct, it’s going to be available in September or October.”

“Facebook’s listing is giving investors a way to cash in on social media at the height of the phenomenon, as the tech giant goes public in what is likely to be the biggest Internet initial public offering in United States history… According to Thursday’s regulatory filing, Facebook will offer 180 million shares of class A stock, and stockholders will sell almost as much of their own.”

*taking over the world*

“In an era of wage freezes and cuts for many workers, it’s good to be the CEO of a big American company. According to a survey obtained by The Guardian, American CEOs saw their pay packets rise by 15 per cent in 2011. That brought the average up to about $5.8 million US a year.”

“Harvard and the Massachusetts Institute of Technology have joined forces to offer free online courses in a project aimed at attracting millions of online learners around the world, the universities announced Wednesday. Beginning this fall, a variety of courses developed by faculty at both institutions will be available online through the new $60 million partnership, known as “edX.” ‘Anyone with an Internet connection anywhere in the world can have access,’ Harvard President Drew Faust said during a news conference to announce the initiative.”

“Rogers Media announced it plans to close eight websites—including SweetSpot.ca and CanadianParents.com. What’s interesting about the recent news is that chief digital officer Jason Tafler says that the cuts are coming despite loyal followings and solid ad sales on the soon-to-be shuttered sites. He went on to suggest that the company’s new digital strategy is focused on developing “multiplatform integration and growth opportunities for our premium brands.” Business-speak, we suspect, for more sports, sports, sports.”

“Edvard Munch’s painting The Scream sold for a record $120 million at auction on Wednesday at Sotheby’s, far exceeding pre-sales estimates of about $80 million. The vibrant piece from 1895, the most famous art work in the world still remaining in private hands, went under the hammer at Sotheby’s Impressionist and modern art auction, where clients and press packed the salesroom for the much-anticipated sale.”

That’s a lot of money. Also, this painting scares me.

Including “Nike – named for the Greek goddess of victory. The swoosh symbolises her flight” and “Adobe – from the Adobe Creek that ran behind the house of co-founder John Warnock” and “Sony – from the latin word ‘sonus’ meaning sound and ‘sonny,’ a slang word to refer to a bright youngster.”

“Publishers have started printing advertisements on book covers in a move to help their industry sustain development and survive. The book, My Son, Yo-Yo, written by the mother of renowned cellist Yo-Yo Ma and released in March, was the first book to carry an advertisement, said Li Baozhong, deputy director of the Publishers’ Association of China. On the back cover, beneath a sentence describing the love between a mother and her children, is the logo of a well-known Chinese textile manufacturer… The trial will open a new gate for the publishing industry and will help sustain its development.”

“Astrophysicists at the University of Warwick have discovered four white dwarf stars that are surrounded by cosmic dust from shattered planetary bodies. One star is in the process of consuming one Earth-like exoplanet… Scientists are now proposing that this could be our planet’s future and inevitable demise. Our sun will eventually expand and engulf Mercury, Venus and Earth. It could devour terrestrial planets and form asteroids. Jupiter, though, would survive the sun’s transformation.”

“Sea-level rises are unlikely to be as high as worst-case scenarios have forecasted, suggests new research which shows that Greenland’s glaciers are slipping into the sea more slowly than was previously thought. But the scientists warned that ice loss still sped up by 30% and is driving rises in sea levels that endanger low-lying coasts around the world.”

“Parents, go on, let your children stay up a little later Saturday night. Grab the blankets, set out the lawn chairs and enjoy the glow of the supermoon – if you can. A supermoon occurs when a full moon is also at its perigee, its closest point to Earth on its elliptical path. On May 5, at 11:34 p.m. ET, it will reach this perigee point, and one minute later, will line up with the Earth and the sun to appear especially big and bright.”

“Cat ownership is on the upswing, and outpacing that of dogs. Eight-and-a-half million cats were owned by Canadians in 2010, compared to 5 million dogs. It’s normal for pet adoptions to slow in recessions, but only dogs have felt the bite of this downturn – ownership is down 3 per cent from the year before. How did the cat, maligned by dog-lovers as lazy, snobby and boring, suddenly climb the upholstered social-media ladder?”

I had meant to include this in yesterday’s Clicks! Great article about the rise in cat popularity. I LOVE CATS!! :)

“Off the coast of Brazil, dolphins and humans have been working together to snare mullet since 1847… ‘The dolphins drive the mullet towards the fishermen, who stand waist-deep in water holding nets. The humans cannot see the fish through the turbid water. They must wait for their accomplices. As the fish approach, the dolphins signal to the humans by rolling at the surface, or slapping the water with their heads or tails.'”

“Can “The Avengers” take the top spot from Christopher Nolan’s 2008 “The Dark Knight” as the highest grossing superhero movie of all time? Global News takes a look at the top five superhero movies to rule the box office.”

I can’t believe the three Spidermans are in there. I never really liked the Spiderman franchise all that much, lol. Hoping the reboot will be better. I hope The Avengers will take top spot!!!!

Thor & Loki Photo of the Day: 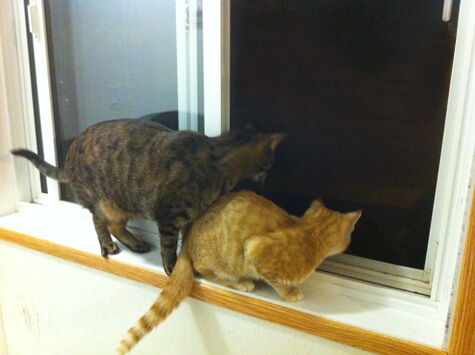 The kitties taking a look at their two-week house guest (my brother’s old dog Poppy!)

Linda Hoang is a Canadian blogger based in Edmonton, Alberta, who writes about travel, food, lifestyle and pet topics. She's also a seasoned social media/digital strategist with a journalism background, the founder of the Edmonton International Cat Festival and co-founder of Stop Race Based Hate, an online anti-racism education tool. Linda loves exploring the world with her partner Mike, eating their way through cities, supporting local businesses, and photographing Instagrammable Walls. Linda is a fur-mom to two cats and two dogs.
PrevPreviousPhoto of the Day: Thursday, May 3, 2012
NextReview: Tournament of Kings (Las Vegas)Next