“One man is dead after a fatal shooting, involving RCMP officers, took place in a rural area near Vegreville. The Alberta Serious Incident Response Team (ASIRT) is investigating the shooting.”

“Edmonton police are warning citizens to be on the watch for strangers in their neighbourhood – on bike or on foot – who appear to be looking into vehicles, yards or back alleys. Police say criminals are using bikes to scout for break-in opportunities in homes, garages and vehicles.”

“A former Edmonton teacher who admitted to a sexual relationship with a student will have to wait until September to learn his fate. Sentencing was expected Thursday afternoon for 37-year-old Brad Ashley Glenn, who pleaded guilty in April to sexual touching of a person he was in a position of trust or authority over. The female student, who cannot be named, was 17 at the beginning of the sexual relationship, which lasted from December 2009 to May 2010. Crown prosecutor Shelley Bykewich said the case was delayed after she only received the pre-sentencing report Wednesday, leaving too little time to prepare a brief for the hearing.”

“As anyone braving bumper-to-bumper rush hour traffic on Whitemud Drive can likely attest to, the latest Angus Reid poll suggests Albertans are some of the worst drivers in the country. From multitasking to running red lights, cutting into lanes, turning without signaling and tailgating, Albertans lead the way with bad driving habits, results from Thursday’s poll reveal.”

“An insensitive Facebook post has landed Deputy Premier Thomas Lukaszuk some time in the principal’s office. Premier Alison Redford said Thursday she was very disappointed by Lukaszuk’s breezy caption for a photo of the Fairmont Hot Springs, B.C. mudslide that stranded some 600 tourists — including some Albertans — for days… Alberta’s premier was not amused. “I’m very aware of it … I intend to have a conversation with him about it, I take this very seriously,” said Redford.”

“Friday the 13th proved more than lucky for one Fort McMurray man who won $21.8 million on the ill-famed day’s Lotto Max draw. Chris Fowler, 55, has been buying lotto tickets religiously for as long as he can remember. The recently divorced dad of two — who picked up the $21,771,980 ticket at his local Mac’s store — says he always knew he would win, he just never knew when.”

I am utterly, utterly jealous.

“The death of a baby girl from whooping cough has Alberta health officials reminding people they should be immunized against the disease. They say one-month-old Harper Whitehead died at Alberta Children’s Hospital in Calgary last month from complications caused by pertussis. Children under six months of age have little, if any, immunity to the cough, but cannot be vaccinated against it until they are older.”

“A 19-year-old man faces a firearm charge in connection with the Scarborough block party shooting that killed two people and injured 23 others Monday night.”

Good that there will be some justice to this. Sad it’s a teenager who is involved.

“George Zimmerman has given his first TV interview since he shot dead Trayvon Martin nearly five months ago – and not surprisingly, the teenager’s family didn’t like it. Zimmerman, out on bail while he awaits his trial for second-degree murder, told Fox News’ Sean Hannity that he wanted to tell the Martins and the country: “I’m sorry that this happened.” He told Hannity that he didn’t regret his actions that night, neither getting out of his car nor carrying a gun. “I feel that it was all God’s plan,” Zimmerman said.”

Hmmmm. Also, I don’t understand America’s court system (and how he can do and do this public interview whilst being charged and awaiting trial, etc.)

“Job stress is as hard on a woman’s heart as it is on a man’s, a large new study has found. The study of more than 22,000 women who were monitored for 10 years found that those who held highly demanding jobs, with the power and authority to make major decisions, had an almost 40-per-cent increased risk of having a heart attack, stroke, bypass surgery or other cardiovascular “event” over the follow-up period, compared to women with low job strain.”

Well it would make sense.

“The main who coined the phrase “nature-deficit disorder” says society’s obsession with technology and a fear of strangers is conditioning children to be afraid of the outdoors. Journalist and author of ‘The Nature Principle’ Richard Louv told CTV’s Canada AM that while nature-deficit disorder is not a known medical diagnosis, it should be.”

“Just eight days before the 2012 Summer Olympics are set to launch in London, the British Medical Journal has stepped into the arena of sports-drink science with a group of articles that suggest the science behind sports drinks is biased and inconclusive.”

I never really trusted that sports drinks were good for you, lol. Good ol’ water!

“You’ve heard of the bat signal—now get ready for the cat signal. A diverse crew of Internet businesses, advocacy groups, and lawmakers has banded together to create something called the Internet Defense League. The organization seeks to save the ‘Net from bad laws like SOPA. And a cat signal—modeled after the signal used to rouse Batman each time Gotham City is threatened—is what the group will use to alert the world when it’s protest time.”

“Facebook is testing a new layout for Open Graph app stories in the news feed that looks very, very familiar. In fact, some would say it directly rips off the quickly growing Pinterest, which, by the way, also sports the new look since the social network offers its own Timeline integration.”

“Google Inc.’s core Internet business boosted revenue 21 per cent in the second quarter, while its recently acquired Motorola Mobility business raised Google’s overall revenue to $12.21-billion. Shares of Google were up 3 per cent at $609 in after-hours trading on Thursday.”

“One the world’s most sophisticated humanoid robots at the moment is Bina48. The robot, built by Terasem Movement Foundation in Bristol, Vermont, is described as capable of independent thought and emotion. The Terasem Movement Foundation believes that in the near future, families and even individuals will own personal robots that will be able to download people’s personalities, serve as avatars and assistants to professionals.”

I am not really impressed, lol.

We are doing good.

“For the second week, Nickelodeon and its two smaller siblings Nick Jr. and Nicktoons, owned by Viacom, have disappeared from DirecTV’s lineup, affecting would-be viewers across the country. The two companies have not been able to agree on the amount of money that Viacom should receive from DirecTV for a bundle of its channels, including Nickelodeon, MTV and Comedy Central. For the Disney Channel, Cartoon Network, the Hub and Sprout, it is the equivalent of a baby boom after a hurricane or a snowstorm. After all, while adults may have 500 channels at home, children only have a handful to choose from.”

Including “go exploring,” do something, anything,” “embrace your weirdness” and more!!

“An 18-year-old Taiwanese man, identified as Chuang, is reportedly dead after playing 40 hours straight of Diablo III, an action role-playing video game, in a room he booked at an Internet cafe in Tainan.”

How are people still dying from this?!?!

“A 450-year-old certificate of debt has been pulled out of an archive that shows Berlin owes the small German town of Mittenwalde quite a bit of cash. According to Reuters, Mittenwalde would be one of the richest towns in the world if Berlin were to pay back the centuries-old debt.”

“The owner of the Texas-based Bikinis Sports Bar & Grill has bought an entire town and has named it after his restaurant… Eater Nation reports that Guller wants to turn the town into a huge playground. He has even talked about making a campground in the town.”

“In this tearjerking YouTube video, watch as a soldier returning home for a visit gives his wife a surprise of a lifetime. Rebecca B., who submitted the video to the Welcome Home Blog, said her husband had invented an elaborate ruse so that she would be caught unawares by his arrival.”

“Kindness is contagious, and 5-year-old Alexis Blackburn is living proof. With a little help from her dad Kyle, she inspired the Reddit community to send well wishes to sick children in hospitals throughout the country.”

Love what the Internet community does sometimes. 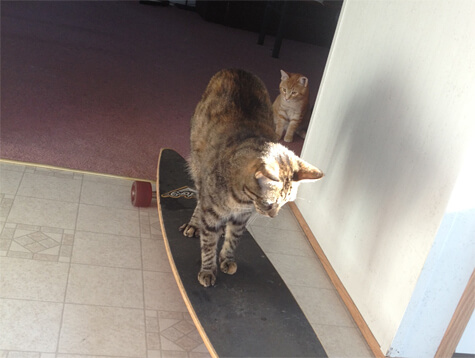