“Reddit raked in more than 2 billion pageviews in December, double the amount the site posted the year before. The network also disclosed that it got close to 35 million unique visitors for the period, meaning the average user viewed about 13 pages per visit. The average time on site for Reddit was 16 minutes. That also averages to 100 million monthly pageviews per Reddit employee. Reddit broke the 1 billion pageview barrier last February.”

“A growing number of Canadians are more worried about the future of the economy, and how they’ll fare in the midst of what many consider a mild recession, according to a survey released by the Economic Club of Canada.”

Lol. Well there’s got to be at least one “Canadians are worried about the economy” story per month I’d say.

“The survey of respondents spanning three generations shows on average Canadians want to retire at 61, and the younger they are, the earlier they want to retire… The problem is that the survey also shows six in 10 Canadians have less than $100,000 in household assets, not counting any equity they may have in their homes. Sixteen per cent have no assets at all.”

“The Edmonton Symphony Orchestra has joined forces with a deal-of-the-day website as part of an ongoing effort to attract new patrons, especially young people.”

Hm, I’m intrigued. $31 for two tickets to “Late Night Romantics” concert. The deal ends tomorrow and this is kind of a tight couple weeks for Mike & I so I don’t think we’ll be buying it but if something like that shows up again I feel that I would! :) It is definitely intriguing! (And that is the point is it not?)

“Research out of Northwestern University finds that when an unhealthy entree is accompanied by a healthy side, people consistently underestimate the number of calories they’re consuming — and this effect is three times stronger among those focused on losing weight. The study author calls it the “side-salad illusion,” and says it plays a huge role in why dieting can paradoxically lead us to pack on pounds.”

“Some fantasize about being sexual in public. Others cruise bars looking for anonymous encounters with strangers. Tolerance builds and things get boring, so the women have to engage in ever-riskier or more frequent behaviour to get the same “hit,” or even just to feel normal… Little is known about the prevalence of sexual addiction in women, but psychologists say the phenomenon is real and only now getting the attention given men.”

Weird. Who would have thunk.

“The federal government is pre-paring to launch a spam reporting centre (SRC) that will crack down on the illegal and annoying calls, texts and email messages that flood Canadians’ cellphones, inboxes and social network accounts such as Face-book and Twitter.”

“A new charity thrift store put couches, tables and chairs in more than 1,600 apartments for the homeless last year, accomplished with the help of small, but essential helper — a five-year-old dog with a nose for bed bugs.”

“The ease with which birth parents can use technology to get in touch with their children without warning and without following established safeguards has alarmed adoption agencies.”

Hm. Yes I would say that is alarming.

“In the year 1900, John Elfreth Watkins, Jr. decided to give clairvoyance a go by asking “the wisest and most careful” thinkers from “the greatest institutions of science and learning” what they thought might transpire over the course of the 20th century. And while Watkins doesn’t mention who these “wise and careful” minds are, it’s downright impressive how many of these predictions have actually come to pass in the 100 years (well, 112, now) since this column was written.”

Really cool to read these predictions (and the ones that came true!)

“‘Being fat takes the fun out of being a kid,’ read graphics of a TV ad in which a young girl tells of how she doesn’t like going to school because she’s bullied over her weight.”

I could see how this would be controversial, lol.

“The act of peer to peer file-sharing is a holy act and information is sacred, according to the tenets of the Missionary Church of Kopimism. An offshoot of Sweden’s Pirate Party, the 3,000 members of the church have been attempting to be recognized as an official religion since 2010. After their third application, the Swedish government agency called Kammarkollegiet finally accepted Kopimism as a formal religion.”

“U.S. album sales rose more than 3 percent last year for the first gain since 2004 – a sign that rising digital sales are finally stemming the decade-long decline of compact discs.”

“Every morning between January 2 and March 30 Figment will hit subscribers’ inboxes with a different writing prompt, reminding aspiring writers to put their thoughts into words every day and giving them fresh guidelines to get started.”

Cool. I’m debating whether or not I want to sign up.

“Yoga can give you brain damage… Yoga is fake exercise… Admittedly, yoga attracts some of the worst people on the planet: The image obsessed girls mentioned above, super-hippies, and self-righteous spiritual types.”

“Justin Timberlake’s grandmother has confirmed the singer’s engagement to Jessica Biel, revealing he broke the news to her on Christmas Day.”

Wow, that contestant is craaaazy.

“Global News has posted an extended version of its 2008 news-story-turned-viral-video.”

I completely remember seeing this back in 2008 and didn’t realize that this reporter was Rob Leth!!! Haha. I sift through a bunch of Rob Leth stories every week for the affiliates, lol. Hilarious video!! 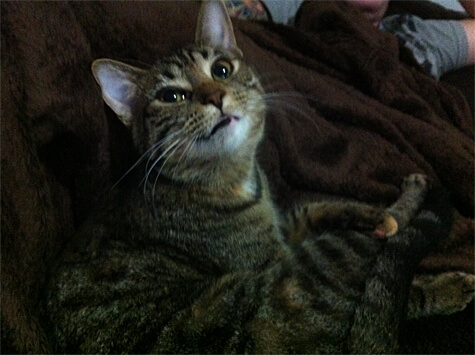 Thor looks kind of crazy here but she’s fine, lol. Drying off after a bath!

Linda Hoang is a Canadian blogger based in Edmonton, Alberta, who writes about travel, food lifestyle and pet topics. She's also a seasoned social media/digital strategist with a journalism background. Linda loves exploring the world with her husband Mike, eating their way through cities, supporting local businesses, and photographing Instagrammable Walls. She is the founder of the Edmonton International Cat Festival and a fur-mom to two cats and two dogs.
PrevPreviousClicks of the Day: Wednesday, January 4, 2012 Edition!
NextReview: Sumo SumoNext