“An Alberta woman who once drank Red Bull religiously claims she has sworn off the product after making a disturbing discovery. About four months ago, Janell Carlson was drinking a large can of the energy drink that she bought in Fort Saskatchewan, when she says she felt something strange in her mouth. “I was sick at the time so I thought it was phlegm. I had swallowed a chunk, dismissed it and there was a chunk in between my gum and my bottom tooth,” she says. “(I) pulled it out and it looked like a round piece of plastic, so I kind of looked at my can and there was something big and large at the bottom of it.”

“It took less than 24 hours for #TellVicEverything to start trending on Twitter. Vic – Public Safety Minister Vic Toews, tabled online surveillance legislation, Bill C-30, on Tuesday. Starting late Tuesday night, he was the target of an anonymous Twitter attack that revealed details of his personal life – apparently in protest to the bill. The Twitter campaign has since morphed into #TellVicEverything – where Tweeters tell Toews all the personal details of their lives.”

“The first person sentenced for his role in last summer’s Stanley Cup riot in Vancouver was handed a 17-month prison term on Thursday, less 3 1/2 months for time served. Ryan Dickinson also was given two years’ probation and several conditions, including that he not possess or consume illicit drugs or alcohol.”

Hope he learns his lesson.

“Fracking – the shattering of rock deep underground to release shale gas – isn’t causing surface water pollution, but other activities associated with drilling may be, a new study says… above-ground spills, leaking drill casings and the mishandling of wastewater produced by shale gas drilling may be responsible for incidents of groundwater pollution – but fracking, the most controversial aspect of shale gas development – is not to blame.”

“Swiss scientists said Wednesday they plan to launch a “janitor satellite” specially designed to get rid of space junk, the orbiting debris that can do serious and costly damage to valuable satellites or even manned space ships.”

Good initiative. We should also be focusing on cleaning up junk on Earth too, lol.

“The South Korean government is considering another law to further curb rampant game playing and Internet addiction among its youth. Dubbed the “Cooling Off” system, it aims to regulate the amount of time a student spends with video games in a 24-hour period.”

“Despite advice that a cold should be coddled, moderate exercise isn’t a bad idea when you’ve got a runny nose. And unlike lots of other suggestions on how to treat a cold, this one has some science behind it. Study subjects at Ball State University were infected with a cold virus and divided into two groups; exercisers and non-exercisers… Despite the two different strategies to dealing with a cold, researchers found no difference in the severity of the symptoms between both sets of subjects. Nor was there a difference in the length of time the cold hung around.”

But being sick is the best excuse for just lazing about… :)

“Twitter is being sued for defamation for the first time under Australian law. Joshua Meggitt, the Melbourne man wrongly named by writer and TV identity Marieke Hardy as the author of a hate blog dedicated to her, is now suing Twitter Inc itself. It was a tweet seen around the world, and now that Hardy has already reached a confidential legal settlement with Mr Meggitt, believed to be about $15,000, and published an apology on her blog, his lawyers are seeking damages from the social media site where the original defamation had the greatest exposure.”

“Pinterest, the social image-sharing site that has exploded in popularity over the past few months, has found itself with a strange bedfellow: the U.S. Army. The Army’s Pinterest boards include topics such as “Goodwill,” “Humanitarian Relief,” and “HOOAH!.” Each board is designed to show some aspect of Army life and the Army’s mission or to connect with Army families (“DIY & Decor,” for instance, might be a favorite among Army moms).”

That’s pretty cool. See, everyone can find a use for Pinterest! ;)

“New York Times correspondent Anthony Shadid, a two-time Pulitzer Prize winner who strove to capture untold stories in Middle East conflicts from Libya to Iraq, died Thursday in eastern Syria after slipping into the country to report on the uprising against its president.”

Sad news. Journalists abroad in war-torn countries… risking it all to tell everyone what’s happening.

“For millions, Neil Hope was “Wheels” — the lovable, troubled onscreen teen with that feathered blond hair and huge glasses. To the public, the Toronto actor’s role as Derek Wheeler on the hit Degrassi TV series thrust him into the realm of celebrity, but in real life he died anonymously. Police have confirmed to the Star that Hope was found dead on Nov. 25, 2007 in a Hamilton rooming house. That shocking revelation was made known to friends and family only this January — and became public Thursday.”

“Helene Campbell’s one-woman crusade to raise organ donor awareness hit another high note Thursday when she made an unexpected appearance on Ellen DeGeneres’s popular daytime talk show. The 20-year-old Ottawa woman, who has been in Toronto for the past month awaiting a double-lung transplant, received a surprise on-air call from DeGeneres via Skype.”

Ellen can be so nice. What a great surprise! The awareness Helene is trying to raise is amazing.

“A NASA robot built to ease the daily lives of astronauts in space greeted its human commander with a hearty handshake Wednesday (Feb. 15), along with a silent message: “Hello, World.” The historic handshake between man and machine —a first in space —was shared between NASA’s humanoid robot, named Robonaut 2, and American astronaut Daniel Burbank on the International Space Station.”

That’s one small step for man, one giant leap for robots taking over the world!

“A new image of a possible Windows 8 logo for the upcoming release of Microsoft’s established OS has been leaked according to The Verge. A Chinese website, cnBeta emerged with the new design and The Verge has confirmed the authenticity of the logo.”

“A review of the history of company logos and an imagining of how they may appear in the future.”

Fun overview of logos. Also interesting to see the future predictions! I think Google’s predictions are the strangest. Everything else is believable ! Haha. 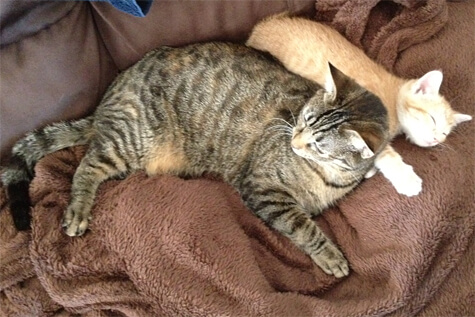 Thor and Loki sleeping together :) They do that a lot now! Besties.

Linda Hoang is a Canadian blogger based in Edmonton, Alberta, who writes about travel, food lifestyle and pet topics. She's also a seasoned social media/digital strategist with a journalism background. Linda loves exploring the world with her husband Mike, eating their way through cities, supporting local businesses, and photographing Instagrammable Walls. She is the founder of the Edmonton International Cat Festival and a fur-mom to two cats and two dogs.
PrevPreviousStorify: #yegvalentine: a collection of Edmonton-specific Valentines tweets.
NextReview: Barb & Ernie’sNext