(I apologize again since I’ve been slacking on these lately!!)

“The Timeline reflects a paradigm shift in the way our lives are being shared with the rest of the world.”

An interesting read. Perhaps a good thing that my brother’s refusing to put or let anyone put photos of his baby on Facebook.

“If you are impatient and want to experience the new Timeline Facebook announced earlier today, you can turn it through the developer section of Facebook.”

Meanwhile, I used these steps to get an early version for the new Facebook Timeline, lol. Early adopter ;)

“2 million Canadians will have only cellphones at home, ditching landline services by the end of 2011.”

We have a landline but only because it was included in our awesome cable and Internet package!

“A skin and bones costume titled “Anna Rexia” found its way onto the online inventory of popular beauty and costume store Ricky’s before being pulled from the company website.”

“After Jamey Rodemeyer, a 14-year-old boy and maker of a viral “It’s Gets Better” video, took his own life Sunday after years of bullying, many mourned his death by rallying to his cause, leaving online comments like “Don’t worry, we’ll fight for you. R.I.P.” on his YouTube video. Among those springing to action is none other than his role model and idol Lady Gaga.”

So sad that people are still bullying to such an extent that it would lead to suicide. Stop it. And parents? Teach your kids not to do this, geez.

“Come around the globe with us on a tour of ‘Did you just see what I just saw?'”

The world is such a crazy place :)

“Apple has married all the elements of its experience and connected with its customers in a deeply emotional, irrational way.”

“The gravitational force — 10 Gs — from the spinning loops at 223 miles per hour in that single minute is lethal.'”

“Canada is the third-best country in the world to be a woman.”

“That amounts to 110 grams a day and accounts for 21.4 per cent of Canadians’ overall calorie intake.”

Though I’m sure it’s higher for a LOT of people, given how obese North America is becoming.

What words/phrases annoy you?!

“Yawning might be a basic way to cool an overheated brain, especially when the surrounding air temperature is cooler than a person’s body temperature.”

Then my kitty’s brain must be cooled all the time! She is constantly yawning that lazy animal, hehe.

“An 1884 De Dion Bouton Et Trepardoux Dos-A-Dos Steam Runabout has been put up for sale and is expected to fetch up to £1.6million when it is auctioned off early next month.”

“With the weak economic forecasts, there are more and more concerns about demand for beef.”

“One of the greatest iPad/iPhone accessories ever created! This interactive case allows you to use your iPad/iPhone with a massive screen that is multitouch capable.”

Lol is this really necessary?!

“Tourists in China are flocking to get a glimpse of a strange-looking animal which is keeping zoo staff guessing as to what kind of creature he is.”

Weird! Definitely somewhere in the monkey genre but not quite, lol. But how does a zoo take in an animal and not know what it is? lol.

“Non-violent offenders in Bay Minette now have a choice some would call simple: do time behind bars or work off the sentence in church.”

“The global economy was supposed to be better by now.”

“Daily deals services such as Groupon and LivingSocial are proliferating, with more than 650 providers serving 26 million customers so far. The market is growing so quickly, it’s hard to get a handle on who’s using these products and what they’re using them for.”

I’ve actually only purchased maybe three Groupons and one or two other deals from different sites since all of these daily deals started popping up last summer! What about you?

“Two of Canada’s leading marine biologists and a conservation group say a five-year proposal to slaughter 140,000 grey seals in the southern Gulf of St. Lawrence is being driven by politics, not science.”

If you tuned into my previous Clicks of the Day you would have seen the original Fox News interview with this hilarious guy. Now it’s been turned into an auto-tuned song, lol. Hilarious!!! 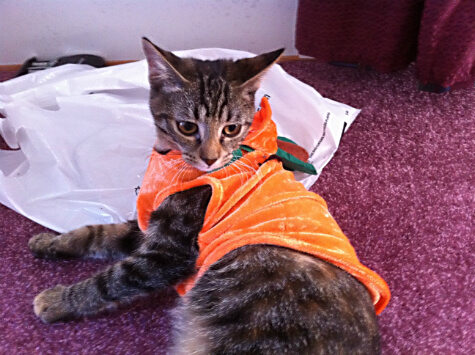 Thor is going to be a pumpkin for Halloween!!!!!

Linda Hoang is a Canadian blogger based in Edmonton, Alberta, who writes about travel, food lifestyle and pet topics. She's also a seasoned social media/digital strategist with a journalism background. Linda loves exploring the world with her husband Mike, eating their way through cities, supporting local businesses, and photographing Instagrammable Walls. She is the founder of the Edmonton International Cat Festival and a fur-mom to two cats and two dogs.
PrevPreviousClicks of the Day: Monday, September 19, 2011 Edition!
NextLet’s Look Up!Next