“An Edson teen wrapped up the bike ride of his life on Sunday – after cycling from the small Alberta town all the way to Edmonton to raise money for the Stollery Children’s Hospital.”

So impressed with him!!!

“A nation-wide recall involving ground beef products from an Edmonton manufacturer has been expanded for the sixth time. The products by Edmonton’s XL Foods Inc. are being recalled over concerns of possible E. coli contamination. The recall was first issued a week ago and on Sunday the Canadian Food Inspection Agency expanded the recall for the sixth time – to include even more potentially affected products.”

This is getting ridiculous now. Six times the recall has been expanded? What a mess.

“One Quebec student group says that with tuition hikes officially off the table, it will now champion the idea of free education. The new Parti Quebecois government scrapped a controversial increase in post-secondary tuition fees this week and a hardline student group is now turning to free education as its long-term goal.”

Wow. Cheapest tuition in Canada still not good enough for ya eh.

“In an effort to weed out the bad guys, the FBI is rolling out a nation-wide facial recognition system. Soon, it will be illegal for drivers to smile on their driver’s license photographs, as exaggerated smiles prevent the software from working properly.”

“At least nine people have been killed and several are missing in Nepal after an avalanche hit climbers and guides at a camp on a Himalayan peak. The bodies of a German and a Nepalese guide have been recovered from the slopes of Mount Manaslu, police say. A further seven bodies have been sighted by rescue pilots. Spanish foreign ministry officials say one of the dead is a Spanish national.”

“Insomnia is rampant. One in three of us — more than ever before — struggles with sleeplessness, and one in 10 has a diagnosed sleep disorder. While we should rest for up to nine hours a night, we average less than seven, leading to a reliance on sleeping aids and pills for quick-fix results. So why are we unable to switch off? A new study by the Lighting Research Centre, at the Rensselaer Polytechnic Institute in New York State, published last week, identified how exposure to certain types of light can disrupt our sleep. Researchers confirmed that “blue light” from the screens of smartphones, tablet computers and e-readers is particularly detrimental — especially when we’re exposed to it two hours before bed.”

Lol – I definitely look at my phone or computer two hours before bed (typically) but I have no problems zonking out!!

“The secret to avoiding weight gain may be residing on the top of your tongue. According to a new German study, obese children have less sensitive taste buds than kids of normal weight, and that may drive them to eat more.”

“For anyone who’s ever been tired of listening to someone drone on and on and on, two Japanese researchers have the answer. The SpeechJammer, a device that disrupts a person’s speech by repeating his or her own voice at a delay of a few hundred milliseconds, was named Thursday as a 2012 winner of the Ig Nobel prize — an award sponsored by the Annals of Improbable Research magazine for weird and humorous scientific discoveries.”

“Speaking at an Online News Association conference, Twitter CEO Dick Costolo said that users would have the ability to download their tweets by the end of this year.”

I’m not sure if I would ever use a record of my tweets but cool!

“For the second time in a month, criminals have used public Facebook status updates to communicate with police and loved ones during hostage situations.”

“Neither side in a bitter patent battle is satisfied with Apple Inc.’s $1 billion jury verdict over Samsung Electronics Co. after a three-week trial this summer. Samsung wants a new trial. Apple is seeking an additional $707 million in damages and interest.”

Okay, I love you Apple but let’s not get too greedy!!

“A daring new documentary that uses scientific analysis to challenge the official 9/11 story became the most popular film on PBS during the week of the 9/11 anniversary, which followed its record-breaking broadcast on Colorado Public Television (CPT12).”

Awesome! Need to watch it.

“It really happened: Six generations of inbreeding spanning the years 1800 to 1960 caused an isolated population of humans living in the hills of Kentucky to become blue-skinned. The startlingly blue people, all descendants of a French immigrant named Martin Fugate and still living near his original settlement on the banks of Troublesome Creek when hematologists studied them in the 1960s, turned out to have a rare blood condition called methemoglobinemia… Stearns says globalization, immigration, cultural diffusion and the ease of modern travel will gradually homogenize the human population, averaging out more and more people’s traits. Because recessive traits depend on two copies of the same gene pairing up in order to get expressed, these traits will express themselves more rarely, and dominant traits will become the norm. In short, blue skin is out. Brown skin is in.”

“Researchers have found that adding a missing protein to infertile human sperm can ‘kick-start’ its ability to fertilise an egg and dramatically increase the chances of a successful pregnancy.”

“With Arctic ice melting at record pace, the world’s superpowers are increasingly jockeying for political influence and economic position in outposts like this one, previously regarded as barren wastelands. At stake are the Arctic’s abundant supplies of oil, gas and minerals that are, thanks to climate change, becoming newly accessible along with increasingly navigable polar shipping shortcuts. This year, China has become a far more aggressive player in this frigid field, experts say, provoking alarm among Western powers.”

“In a case of get ready, get set, flush, home owners in Bulawayo, Zimbabwe have been asked to flush their toilets at a specific time. The two main dams, supplying water to Bulawayo, Zimbabwe’s second largest city, have been drying up due to severe droughts in the southwestern part of the country. This has raised fears of worsening water shortages before the rainy season starts in November. Now the Bulawayo City Council is asking its 1.5 million residents to flush their toilets simultaneously, at precisely 7:30 pm, to unblock the sewers.”

“A 38-year-old woman from the UK coughed up an entire tumor a year ago, and now doctors have told her that she is cancer free.”

“From twitterpated youths to death do us part, from 1586 to 2012, and from Paris to Times Square: this is the look of love. Warning: heart fluttering, heart breaking, and heart re-making all straight ahead.”

YES!!! :) I still love dogs though but my love for cats is exponentially greater. #CATLADY 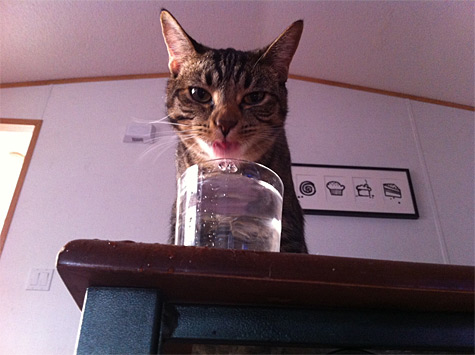 Linda Hoang is a Canadian blogger based in Edmonton, Alberta, who writes about travel, food lifestyle and pet topics. She's also a seasoned social media/digital strategist with a journalism background. Linda loves exploring the world with her husband Mike, eating their way through cities, supporting local businesses, and photographing Instagrammable Walls. She is the founder of the Edmonton International Cat Festival and a fur-mom to two cats and two dogs.
PrevPreviousClicks of the Day: Thursday, September 20, 2012 Edition!
NextSocial Media Column: Twitter plays huge role in television viewingNext