“Scientists at the European Southern Observatory announced the discovery of something they’ve dubbed the Fried Egg Nebula, a super-rare star located about 13,000 light years from Earth.”

Cool! Could have named it something cooler though, lol.

“The effects on a developing fetus would likely be even more severe, perhaps disrupting normal embryonic development and even neurological functioning. A baby’s body and bones may develop differently in weightlessness. And then there’s birth to think about.”

“When it comes to sexual intimacy, more than half of Canadians believe their love life is great.”

Lol, what are your thoughts? Meanwhile…

“Young people across the globe are having more unprotected sex and know less about effective contraception options.”

“New research suggests that women are not only tougher than men (as if there was any doubt), but are also hard-wired to better resist infections and certain diseases, such as cancer.”

“They’re as much a part of Americana as Spider-Man, but Archie and his pals don’t always get the respect they deserve.”

I love(d) Archie comics! <3 Still would if they weren't so freaken expensive nowadays!

“Jell-O went through generations of scientists before becoming what we know it today.”

Interesting read about the history of certain foods/ingredients!

“This interesting infographic should give you a pretty good idea how things evolved from a time when live stock was used as a currency to the present era when one can simply link a credit card to a smartphone and use it to pay for just about anything from restaurant bills and parking meters to cab fares.”

“And while it’s unlikely that the negative effects of cell phones are anywhere close to those of smoking, it does raise the question: Will our grandchildren look at us talking on our cell phones the moment our plane touches down, or while sitting in the doctors office, with the same mix of nostalgia and moral superiority that we feel toward those dated characters on Mad Men?”

“The federal government has paid out more then $600 million in retirement and disability benefits to deceased federal workers and the problem doesn’t appear correctable in the near future.”

“Ben Miller of BenM.at, a German mobile website, decided to compile all of the rumors he’s heard about case leaks, specs, and mock-ups, and build his own mock-up of what he thinks the iPhone 5 will look like.”

Interesting! Looks nice. I think all iPhones have looked nice though ^_^

“Americans today are even more likely than they were a couple years ago to say that saving more, being more frugal and cost-conscious, and, interestingly enough, spending more time with their families, were priorities in their lives.”

Good, people should be more frugal and cost-conscious! Some things people waste money on are ridiculous…

“Just when you thought you’d survived all Facebook-related quarrels, the new timeline is sure to expose more hurt feelings and suspicions.”

Timeline won’t be hurting anyone of my Facebook friends’ feelings or get me in any trouble. How about you? lol.

“Research In Motion has denied an analyst’s report Thursday that the company has seized production of its PlayBook tablet PC.”

Well if it hasn’t yet it definitely will. RIM is going down, down, down.

“Protesters speaking out against corporate greed and other grievances were maintaining a presence in Manhattan’s Financial District even after more than 700 of them were arrested during a march on the Brooklyn Bridge in a tense confrontation with police.”

This “Occupy” movement is gaining quite a bit of steam.

“Activists are planning an occupation of Toronto’s financial district, following in the footsteps of protesters currently camped out on Wall Street.”

Could this be an entire North American revolution?

“The United States is looking at building fences along the border with Canada to help keep out terrorists and other criminals.”

“Alison Redford certainly took her own unique path to the top — one that was equal parts tenacity, unconventionality and scorched earth.”

Learn about your new premier, Albertans.

“Two weeks in and the Zooey Deschanel series is clearly a success for FOX, becoming the number one series on Tuesdays among Adults 18-49 and this season’s No. 1 new series among Adults 18-34, Women 18-34 and Teens.”

“‘Arrested Development’ creator Mitch Hurwitz announced today that the show will be coming back to television — five years after it was cancelled.”

“The cyborg rats are here. Scientists at Tel Aviv University have, for the first time, used “digital cerebellums” to restore brain functions of rats that had previously been lost. According to New Scientist, the program essentially created “cyborg” rats, with a portion of their brain function being replaced by a chip.”

“This remote-controlled equine machine is designed to carry 400 lbs of payload on 20-mile treks over uneven terrain.”

Sigh. If we don’t die of horrific natural disasters then we’re surely going to be killed by technology!

“Ozone loss over the Arctic this year was so severe that for the first time it could be called an “ozone hole” like the Antarctic one, scientists report.”

“The movie studio business model is poised for its biggest shift in years as Hollywood turns to Internet delivery as the only way to boost home entertainment revenues.”

Are DVDs going the way of CDs and cassettes?!

“No mention of this place being secured against vampires and zombies, but just take one look at it and you can tell no monster is going to get inside. It’s ready for just about any disaster you could throw at it.”

“Forget the penthouse suite, one unusual hotel is sending its most important guests 500ft below ground to sleep.”

Pretty creepy. I wouldn’t want to stay there.

“An ultra-light plane crashed into a Ferris wheel at a rural festival in eastern Australia on Saturday, trapping two children on the ride and two adults in the aircraft for hours.”

LOL HOW DO YOU MISS A FERRIS WHEEL?!

“What should journalists read about journalism? Should we be influenced by musings about the relationship between blogging and journalism, or by some timeless advice from George Orwell?”

Huurray! Will be on my reading list for awhile now. #yegmedia – take note!

“The estranged wife of a British lawmaker was convicted on Friday of stealing a kitten from the house of her husband’s lover.”

“An air passenger has been caught trying to smuggle more than a dozen live hummingbirds inside his pants. The tiny birds were discovered hidden in special pouches sewn inside the Dutchman’s pants at Rochambeau airport in Cayenne, French Guiana.”

Oh geez. What is up with people.

“Now, she’s released the music video for the ballad, and, in continuing with her stripped down, talent-only oeuvre, it simply features her walking along a river in Paris, contemplating a past lover in black and white.”

“The AP reported that Secret Service agents, dressed casually, arrived at the store 30 minutes before the first lady, who shopped with an assistant. She reportedly spent 30-40 minutes shopping and was only recognized by her cashier.”

That hard to go out to buy a few things from Target hey, oh the life of a world leader’s wife.

“Collins’ condition worsened after his conviction. In the weeks before his execution, he became violent and tried to escape his cell, and had to be restrained with a straitjacket. Other times he chewed on his blankets, hit his head repeatedly on the wall of the jail cell, and tried to bite anyone who approached him.”

“Cute wittle kitty has an adorable case of the Afternoon Sleepies.”

“This here’s concept art for BNKR Arquitectura’s Earthscraper, an inverted skyscraper shoved deep under the surface of Mexico City. ” 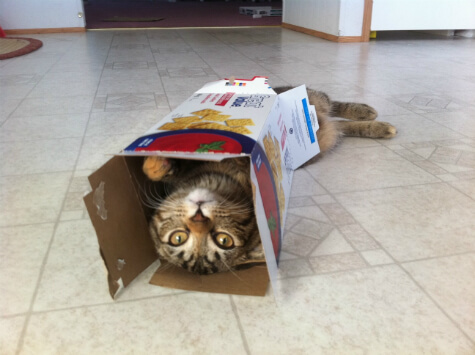 Linda Hoang is a Canadian blogger based in Edmonton, Alberta, who writes about travel, food lifestyle and pet topics. She's also a seasoned social media/digital strategist with a journalism background. Linda loves exploring the world with her husband Mike, eating their way through cities, supporting local businesses, and photographing Instagrammable Walls. She is the founder of the Edmonton International Cat Festival and a fur-mom to two cats and two dogs.
PrevPreviousReview: Japanese Village
NextReview: Lan’s Asian GrillNext