“Meet Serge and Helen Leblanc, an Edmonton couple trying to resurrect “Halloween Alley” – a tradition in the city’s west-end, dating back to the 90s.”

My latest Feature Story! Give it a read/a watch if you haven’t yet please! ;) Happy Halloween!!

“Halloween is coming up soon, and if you want to dress up like an Angry Bird, you’re running out of time.”

Some of these are way cooler than the ones me and Mike dressed up as!!! (But then #11 shows the ones we got, lol).

“According to Webtrends, the data used to create this infographic represents online mentions from October 1-24, 2011 and is an aggregation of Twitter, blogs, online news sites and other social media sources.”

Haha, are you any of the ones listed? #bemorecreative

“A flickering light, a running faucet, an unexplained sound or smell, or just the accumulation of years in a quirky building? Edmonton has no shortage of spooky stories, ghost-stalking believers and skeptics.”

I went into the basement of the CKUA building before to do a Halloween story for NAIT and it was FREAKY!!!!!

“Treats packaged in Halloween-sized mini portions trick people into eating far more chocolate and candy than they otherwise would, a University of Alberta researcher has found.”

Bad!! I don’t like chocolate but I have had SOOO much chips this Halloween weekend!!! So unhealthy :( but delicious!!

“While experts say the Earth can support a staggering 7 billion people, the trick will be figuring out how to share natural resources.”

We are running out of water people!!!!!

“I went to one of Siri’s makers, Gary Morgenthaler, venture capitalist, Siri investor and Siri board member, for a better answer to the who is Siri? question.”

Cool information on Siri. I still find her voice recognition to be sketchy at best. There’s only so many times I will repeat myself!

“How much do these corporations hand over to the U.S. government? The infographic makes clear how much — or little — corporations actually pay on the billions they pull in each year.”

Lol, so more than I will ever make per year (or in my lifetime).

“The Occupy Wall Street movement has not only inspired people to take to the streets, but to open their own wallets to support the cause — many using mobile payment site WePay. On Oct. 10, WePay had recorded more than $81,000 sent to groups associated with Occupy Wall Street. Just 17 days later, that number grew by 301% to more than $325,000.”

Ridonkulous. People are sure generous with their money, lol.

“Whoever said nothing in life is free has never been to Sephora, Denny’s or Starbucks on his birthday. In fact, there are several places that will acknowledge that special moment you came into the world with a gift.”

Sweet list of a few places where you’ll get free stuff on your birthday! I would love to expand this list and then just spend my next birthday hitting up all of the free spots!! :)

“Postmedia Network Canada Corp. – publisher of the National Post and other daily and community papers across the country – will soon be asking more of its readers to pay for online articles.”

This is lame. I’m telling you – people will just get their news elsewhere.

“An Australian tribunal ordered Qantas Airways on Monday to put its planes back into the air, intervening in the nation’s most dramatic labour dispute in a decade after the national carrier grounded its entire global fleet.”

“Chinese police have arrested 12,125 people during a crackdown on the sale of narcotics online and have confiscated more than 300 kg of illegal drugs.”

“Shouldn’t we be spending less time checking and rechecking our many screens, large and small, and more time taking part in what used to be regarded as real life? Is there something inherently wrong when people being separated from their phones, computers and tablets makes them feel nervous, irritable, tense — in other words, when they begin to exhibit classic withdrawal symptoms?”

My phone is on the floor beside my side of the bed, is that far away enough? After a certain time I try to make sure I don’t check my phone even if I do hear it beep… But yes, I am addicted.

“Icons of the wild — lions, tigers and other big cats — are fading from the world’s wild places, warn conservation experts worldwide.”

This is so sad. Terrible :(

“There is no tool that will make the journalism simple. But that’s actually a good thing. Here’s why..”

I don’t think any of the tools and “extras” that keep getting developed are meant to ‘save journalism’ – they just help in telling the story.

“The elevator pitch is that Scroll helps you make magazine style layouts for the web and iPad without needing to know how to code.”

Cool. I signed up to hopefully get an invite to test!

“But surely it takes a lot of practice to get to this kind of elite level. Wonder how mom and dad felt being around someone who’s constantly tapping away?”

Whew that is a lot of money for just texting!

“A mayor struck by lightning was dragged home to his wife by his faithful dog.” 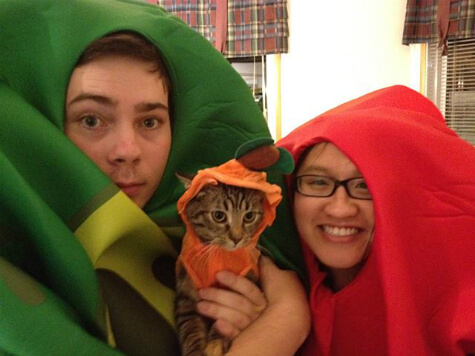 Linda Hoang is a Canadian blogger based in Edmonton, Alberta, who writes about travel, food, lifestyle and pet topics. She's also a seasoned social media/digital strategist with a journalism background, the founder of the Edmonton International Cat Festival and co-founder of Stop Race Based Hate, an online anti-racism education tool. Linda loves exploring the world with her partner Mike, eating their way through cities, supporting local businesses, and photographing Instagrammable Walls. Linda is a fur-mom to two cats and two dogs.
PrevPreviousFeature Story: Edmonton couple resurrecting Halloween Alley from the dead
NextClicks of the Day: Monday, October 31, 2011 Edition!Next