“Members of the Anonymous hacktivist movement are claiming responsibility for taking down more than 40 secret child-pornography websites and leaking the names of more than 1,500 members of one of the illegal sites.”

I love this! Great job Anonymous. Hacking I can get behind.

“As suburbs spread out, commute times slow to a crawl and the cost of operating a vehicle climbs higher, even hard-core drivers are making what British Columbia transportation consultant Todd Litman calls a “rational choice” to find other alternatives.”

I definitely depend on my vehicle to get around. Don’t think I could be ditching it anytime soon!

“Anyone with a massive appetite, $2,000, and a death wish can order up an “Absolutely Ridiculous Burger” from Mallie’s Sports Grill & Bar.”

Ridiculous is right!! Who would eat this?!?! Not even me!! The ultimate piggy, lol.

“None of Barbie’s incarnations has caused so much fuss as her latest: a rock chick with dyed pink hair, a chest and neck covered in tattoos and a small dog in a cactus suit called Bastardino.”

Well done, NAIT! You’re responsible for molding the minds of those delivering delicious food to us Edmontonians, lol.

“Does having a sweet tooth make a person more agreeable and friendly? New research suggests there could be a link between taste preferences and disposition.”

I have absolutely no sweet tooth – but I think I am agreeable and friendly! :( lol.

“Over 100 sculptures formed entirely out of sand – including The Eiffel Tower, the Pyramids of Giza and Corcovado mountain – have been created by a task force of international artists.”

“More than one in ten Americans now own e-readers. Here, we take a look at what that means for the state of reading in America.”

It makes me sad because I have an e-reader, and I used to read like crazy growing up – but for whatever reason my free-time reading has dwindled drastically in recent years :(

“Robots can do a lot. We’ve seen them compete in the Hawaii Ironman and play in an orchestra. But play video games?”

“A 2-year-old Houston girl is being credited with saving her mother’s life after using a cell phone to call for help when she collapsed.”

Ah the positives of technologically-saavy tots!

“Now you can turn those photos into the coolest iPhone cases I’ve seen. It’s an elegant expression of who you are, and it’s a truly unique case because only you can print your design.”

Pretty sweet, lol. I would consider Instagram’in my case!

“When Steve Jobs made the announcement that Apple would be coming out with an MP3 player, it really didn’t seem that earth-shattering.”

Because everyone who would spend $500 on a tablet has already! ;) (Or they won it free in a draw contest, like me! Muaha!)

“Apparently there’s no such thing as pink light, meaning that blind spot on the colour spectrum is merely a stopgap for all the remaining invisible light waves.”

BUT I LOVE PINK.

“A robotic skeleton has allowed a paraplegic woman to walk again in what she describes as a ‘life changing’ experience.”

It’s like that technological predictions for the year 2021 that I linked to in a previous Clicks of the Day! The paralysed will walk again! Cool stuff.

“Eight hundred million users are not enough. Facebook, the world’s biggest social network, is now building profiles of non-users who haven’t even signed up, an international privacy watchdog charges.”

“Graphic designer Jirka Vinse Jonatan Väätäinen has taken it upon himself to transform almost every cartoon Disney princess into flesh-and-blood humans.”

When they say unnervingly realistic, they mean it, lol.

“The planetary disk around the star TW Hydrae has enough water in it to support thousands of oceans. TW Hyrdae is the closest star system to us that is still developing into a full-fledged solar system. That makes it an invaluable resource for exploring the origins of solar systems in general, ours very much included.”

“Electromagnetic fields can be applied to the skull, making your brain do strange, and sometimes completely inexplicable things.”

Kind of frightening what it can do.

“Skeinz, a yarn store in New Zealand, is calling on knitters throughout the world to knit sweaters for the penguins affected by a massive oil spill that occurred earlier this month.”

“President Barack Obama vowed on Friday to pull all U.S. troops from Iraq this year, symbolically ending the war.”

“Cries of panic and horror filled the air as a 7.2-magnitude earthquake struck eastern Turkey, killing at least 138 people as buildings pancaked and crumpled into rubble.”

“As many as 6,000 dead birds have washed up on the shores of Georgian Bay in Ontario, say authorities, who believe botulism may be to blame.”

This makes me so sad. Also reminds me of all those bizarre random bird deaths worldwide a few months ago! Like how everyone just forgot about it… no real explanation still!!!

“Police formally arrested two drivers suspected of running over a toddler who died a week after she was struck on a busy market street in southern China and was ignored by passers-by.”

I have still refused to watch the original video because I feel it’s too sad for me to see but thank goodness arrests have been made. So sad that the baby is dead now. Disgusted with people.

“Here’s a quick comparison of Edmonton media organizations on Facebook (as of October 17, 2011)”

I love Mack’s Media Monday posts but don’t think I’ve really linked them before. I wanted to link this one because I think it does raise some good points to ponder! (Note Global is #1 for TV ;)).

“Television for toddlers, she said, is not beneficial or educational and may cause children some harm. Research into the long-term effects of prolonged media exposure on young children is relatively small, but suggests too much television stunts a child’s language and cognitive development, and can lead to shorter attention spans.”

I would think exposing them to television at a young age would broaden their brains, expose them to more things for better development,etc. But I’m not a scientist, lol.

“British parent Emma Mulqueeny is launching a campaign, simply called Coding for Kids, to encourage the U.K. government, schools and other parents to teach their kids how to code. Her goal is, simply, to make sure local children aren’t left behind by the rest of the world and the ‘thriving digital economy that will drive the future.'”

Lol. I love these videos. So impressive. 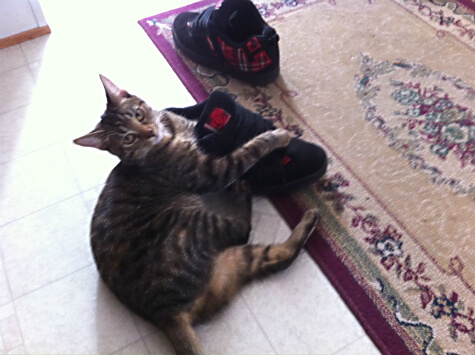 Linda Hoang is a Canadian blogger based in Edmonton, Alberta, who writes about travel, food, lifestyle and pet topics. She's also a seasoned social media/digital strategist with a journalism background, the founder of the Edmonton International Cat Festival and co-founder of Stop Race Based Hate, an online anti-racism education tool. Linda loves exploring the world with her partner Mike, eating their way through cities, supporting local businesses, and photographing Instagrammable Walls. Linda is a fur-mom to two cats and two dogs.
PrevPreviousReview: Edmonton Rocky Mountain Wine & Food Festival 2011
NextClicks of the Day: Monday, October 24, 2011 Edition!Next