“FACEBOOK users have given a big thumbs down to the social networking site after it emerged their web activity is being tracked – even after logging out.”

“Amazon’s tablet, reportedly named the Kindle Fire, could be the first Android device to effectively challenge Apple’s iPad. Or it could end up as just another over-hyped, under-performing tablet steamrolled by the Apple juggernaut.”

“Global News will launch a week-long dialogue with Canadians on-air and online starting Monday, Sept. 26. Discover how Canadians feel about everything from the economy, technology, crime, health care, their sex lives and much more.”

Lots to read here. Good statistics, good insight into Canadian opinions on important topics. Was surprised to read this:

“Seventy-one per cent of residents in Edmonton approve of same-sex marriage, less than in any other big Canadian city.”

Come on, Edmonton! Although 71% seems pretty high so I guess in general – good job Canada on same-sex marriage approval!

“A woman was pronounced dead and sent to a hospital morgue in Brazil – despite being alive and breathing at the time.”

One of my fears. How are you wrongly pronounced dead…

“A new documentary about Mayan civilization will provide evidence of extraterrestrial contact with the ancient culture.”

COOL. I absolutely believe aliens have made contact. Especially in ancient times.

“We’ve compiled a list of 10 of the most beautiful and scenic drives in the United States. We’ll take you from Hawaii to Alaska and many places in between. ”

I’ve driven down the PCH in California. Very pretty <3

“In what seems like another new and interesting marketing move, the makers of Coke, Coca-cola Amital are trying to find another way to appeal to consumers.”

“Star Wars fans from all over the East Coast crossed lightsabers at New York City’s Washington Square Park for what might be the world’s largest lightsaber battle.”

“From The Bell Jar to Moneyball, from Gore Vidal to Tom Wolfe, countless books and authors have guest-starred on America’s longest-running sitcom.”

“What we have here are two galaxies merging together in your standard collision…and then a third galaxy sidling in, just to complete the intergalactic chaos.”

“Two decades after the fossils of a duck-billed dinosaur were discovered in Alberta’s Peace Country, scientists announced on Monday that the creature is part of a new species.”

Squeal! Dinosaurs rock. Can you believe dinosaurs once stood on the very ground you stand on! :D

This week’s Hanged article. Cool feature by the Edmonton Journal that I linked in a previous Clicks of the Day. Great read if you’re into crime/historical crime/history.

“There’s a chance of morning showers with a guarantee of afternoon graphics guy firing.” 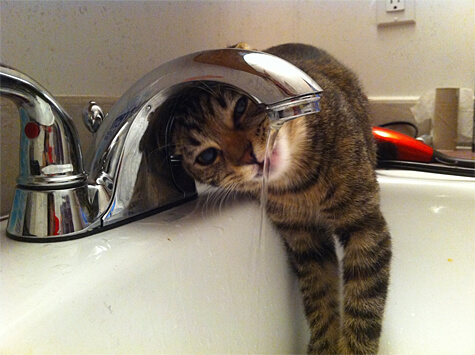 Thor loves drinking from the sink! <3

Linda Hoang is a Canadian blogger based in Edmonton, Alberta, who writes about travel, food, lifestyle and pet topics. She's also a seasoned social media/digital strategist with a journalism background, the founder of the Edmonton International Cat Festival and co-founder of Stop Race Based Hate, an online anti-racism education tool. Linda loves exploring the world with her partner Mike, eating their way through cities, supporting local businesses, and photographing Instagrammable Walls. Linda is a fur-mom to two cats and two dogs.
PrevPreviousLet’s Look Up!
NextClicks of the Day: Tuesday, September 27, 2011 Edition!Next