“Edmontonians may be able to vote from the comfort of their own homes in 2013. The city will test an online voting system with a mock election next month. The 2012 Jellybean Internet Voting Election will be accompanied by roundtable meetings, an online survey, and a citizen jury to determine whether Edmontonians are ready for Internet voting. Feedback and voting results will be used in a report that will go to council in January 2013. The report will outline the cost and reliability of the technology, and will recommend whether the city should offer online voting for special ballots in the October 2013 municipal election.”

Nice. Way of the future!

“Local brass are putting out the call for legislation that would allow cops to seize vehicles of drivers caught cruising 50 km or more over posted speed limits. Edmonton Police Chief Rod Knecht — who also serves as President of the Alberta Association of Chiefs of Police — says it’s a necessary step to curb a “dangerous trend” in excessive speeding here in Edmonton, and Alberta in general. He says some motorists have taken speeding to another level, citing a motorcyclist who was recently nabbed traveling at a “frightening” speed of 264 km/h on the Anthony Henday — Edmonton’s ring-road.”

“Edmonton police are hoping to build a “safe-sobering” facility in the downtown core where drunks can sleep it off safely and stay out of city jail cells. “What I’ve noticed over the last year is the homeless, the mentally ill, the addicted — whether its alcohol or drugs — numbers are growing in the city,” said police Chief Rod Knecht Monday, during an informal sit down with local media. “It is a strain on our resources and on the shelters.” It’s an issue that’s plagued the city’s downtown core for years and now Knecht is ready to present a possible solution to the city. He’s dreamed up an Assessment and Sobering Care Centre — a 24-7 facility — where cops could take those who are too high or drunk, and have them assessed and cared for.”

Great for the chronic alcoholics but I wish they’d not be high or drunk in the first place.

“Monday marked the first day Albertans could personally pay their respects to a beloved former premier – by the turnout, Peter Lougheed’s love for people was clear. “The nice line up, you see, speaks for itself,” Bert Fredette said. When the doors opened at the Legislature Monday at 10:30 a.m., a steady stream of Albertans stretched far beyond the doors.”

Check out that line up!!

Feels like a lot of E. coli contamination possibilities lately…

“As some Quebec politicians were sworn in as Members of the National Assembly on Monday, one item was noticeably absent from the proceedings: the Canadian flag. According to reporters who attended the swearing-in, the flag had been removed from the National Assembly. The Maple Leaf had been on display during Jean Charest’s nine years as premier.”

“Bingo’s days may be numbered, but his young owner is making sure the now world-famous service dog enjoys them to the fullest. Cole Hein, an 11-year-old Manitoba boy, touched the hearts of thousands of people around the world when he posted a bucket list for his dying service dog Bingo on Facebook. As Cole checks off items on the so-called “lick-it-list,” his family has been receiving supportive letters from strangers and packages full of dog treats for Bingo. Some treats were sent from as far away as China and Australia.”

This story gets me emotional!!

“Protesters marked the first anniversary of Occupy Wall Street on Monday with a day of marches that choked Manhattan’s financial district and led to scores of arrests, but that ultimately suggested a movement missing the numbers and energy that propelled it to national prominence last year.”

“Here’s a look at protests and reaction across the Middle East and elsewhere Monday over an anti-Muslim film produced in the U.S. ridiculing the Prophet Muhammad.”

“American children eat as much salt as adults — about 1,000 milligrams too much, or the same amount as in just one Big Mac. Extra salt is linked with higher blood pressure, even in kids, but government research says those who are overweight and obese may be most vulnerable to its effects.”

Salt just tastes so good though…

“Adequate sleep is a key component to dieting and maintaining a healthy weight, a growing body of scientific research suggests. It’s generally recommended that adults get seven to nine hours of sleep a night. Scientific studies are increasingly pointing to the role sleep — or the lack of it — plays in maintaining a healthy body weight. The evidence suggests inadequate sleep influences body weight in a number of ways.”

I get sooo much sleep it’s a little silly.

“Netflix Chief Content Officer Ted Sarandos spoke in Los Angeles last week and slammed the big Internet service providers in Canada for capping services at ridiculously low rates and charging users absurd amounts of money if they dare go over them. “It’s almost a human rights violation what they’re charging for Internet access in Canada,” he said to the group, according to Internet news site GigaOm. Netflix sales in Canada have been limited largely because streaming video can eat a lot of bandwidth, causing users to hit their monthly data caps faster and then have to pay extra fees to companies like Bell, Rogers, Shaw and Telus. Netflix has tried adjusting the data rates that are streamed to Canadian users, but it hasn’t really helped the overall problem.”

“Orders for the iPhone 5 topped 2 million in the first 24 hours after Apple started taking them at 12 midnight Pacific time on Friday. That’s more than double the amount of iPhone 4S orders on its first full day.”

“A man who survived while adrift in the Pacific for 106 days is crediting a shark for helping to save his life.”

“A new study has found that a feeling of “personally experiencing” global warming heightens people’s perception of risks related to the environmental phenomenon – and particularly those risks germane to where they live. Changes to the seasons, unusual weather, water levels, snowfall patterns and shifts related to plants and animals were among the most common signs cited by lay people.”

Climate change affecting animals affects me the most. :'(

“Archaeologists from the University of Tübingen, Germany, have discovered eight extremely well-preserved spears dating back 300,000 years, making them the oldest known weapons found anywhere in the world.”

“Veteran space traveler Chris Hadfield is training to become the first Canadian Space Agency astronaut to assume command of the International Space Station. His two-month stint at the helm of the six-person orbiting science laboratory begins in March 2013.”

“The ropeway between Yushan village and the outside world is a simple affair. A pair of thick cables are strung between two high cliff faces with a steel cage suspended below to carry people and goods in and out of the village. Yushan village has a population of just over 200 people and the only access to the outside world is via this ‘sky road’.”

Wow. Could not live in that village…

“It seems that we have a natural desire to check out the places that served as background for some of our favorite filmed entertainment. Now there’s a website that’s taken the legwork out of it for you.”

“Jimmy Kimmel talks to people on the street about the new iPhone 5 which was just announced, and shows them the iPhone 4S and gets their thoughts, opinions and comparisons.” 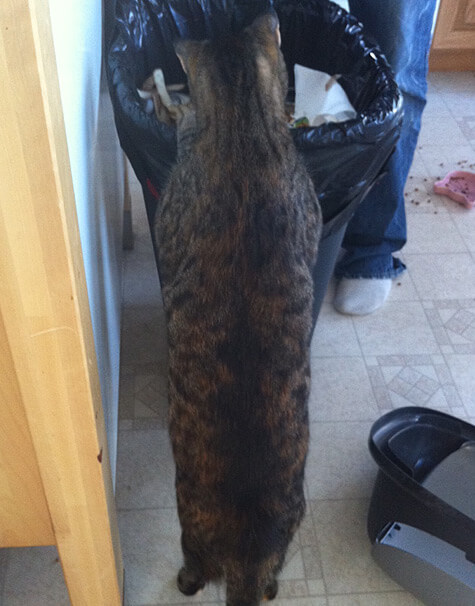 Linda Hoang is a Canadian blogger based in Edmonton, Alberta, who writes about travel, food, lifestyle and pet topics. She's also a seasoned social media/digital strategist with a journalism background, the founder of the Edmonton International Cat Festival and co-founder of Stop Race Based Hate, an online anti-racism education tool. Linda loves exploring the world with her partner Mike, eating their way through cities, supporting local businesses, and photographing Instagrammable Walls. Linda is a fur-mom to two cats and two dogs.
PrevPreviousSocial Media Column: Mommas’ blogs are big business
NextSocial Media Column: Author Marty Chan shares on Twitter what Edmonton means to himNext