“Ubuntu isn’t going to remain just on the desktop, though. Mark Shuttleworth and his company Canonical have much wider plans for the operating system. We can expect to see it competing against iOS, Android, and Windows on smartphones and tablets, as well as making space for itself on future smart TVs in the coming years.”

“Angry Birds and Black Swan topped the list for most Googled costumes for Halloween 2011. Check out what some of the other costumes by Global viewers.”

Woo hoo, Mike & I made the gallery, haha.

“If you’re 40 or older, eating 2 ounces of black licorice a day for at least two weeks could land you in the hospital with an irregular heart rhythm or arrhythmia.”

“Fonts are like cars on the street–we notice only the most beautiful or ugly, the funniest or the flashiest. The vast majority roll on regardless.”

“Kim Kardashian’s mini-marriage became an instant rallying cry among same-sex marriage advocates who pointed out that she was allowed to make a joke of the institution while many gay couples who want lifelong marriages still aren’t allowed to wed.”

So true. What a joke!

“Once again with Halloween upon us, it’s time to revisit candy culture, or more specifically, a system that aims to rank it.”

K I think this is ridiculous – there’s no way to pinpoint who the 7th billion baby is. But I guess being a “part of” the seven billion babies group is acceptable. I just refuse to accept that one baby was the 7th billion and that we know who it is. Impossible!!

“A laser powerful enough to tear apart the fabric of space could be built in Britain. The major scientific project will follow in the footsteps of the Large Hadron Collider and will answer questions about the universe.”

Are people stupid. So next world catastrophe will be accidentally tearing apart the fabric of space? Wonderful.

“YouTube has announced plans to create dozens of channels with original content, constructing an online challenge to the television experience and signaling the video giant’s official leap into high-quality programming.”

“Ghosts and spirits are part of the typical Halloween fun and Dawn says the holiday is traditionally a good time for communing with those beyond the grave… ‘This is where the veil is thin.'”

“We’ve long had sexy costumes; it’s just that the boundaries of “sexiness” have changed.”

“Some 88% text during class; 40% use their phones for last-minute test prep; and a quarter take their devices out during each class.”

Dang, surprised at how many students’ parents foot their cell phone bills! I’ve always had to pay for my own, since Day 1!

“Global BC sports anchor got the shock of his life live on-air on Monday, when he won the BC Children’s Hospital grand prize worth $2.5 million.”

Oh my gosh, this is hilarious and amazing!! Wow. So lucky. 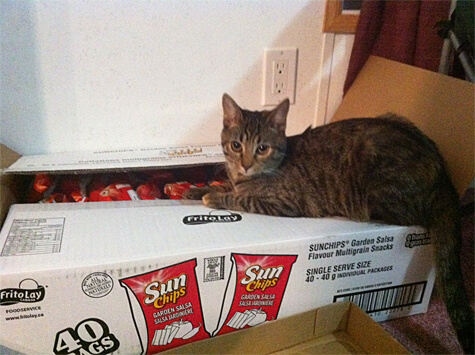 Thor you’re not a trick or treater!!

Linda Hoang is a Canadian blogger based in Edmonton, Alberta, who writes about travel, food lifestyle and pet topics. She's also a seasoned social media/digital strategist with a journalism background. Linda loves exploring the world with her husband Mike, eating their way through cities, supporting local businesses, and photographing Instagrammable Walls. She is the founder of the Edmonton International Cat Festival and a fur-mom to two cats and two dogs.
PrevPreviousClicks of the Day: Oct 28, 29, 30 2011 Weekend Edition!
NextClicks of the Day: Tuesday, November 1, 2011 Edition!Next