“Canadian-born Ralph Steinman was awarded the Nobel Prize in medicine Monday – three days after pancreatic cancer claimed his life… In what seems a particularly cruel twist of fate, Steinman never knew he had been awarded medicine’s most sought-after prize.”

So sad! I wish the committee had given him a heads up. Shouldn’t they be giving them some notice that they’re going to win the prize? lol. He sounds like a great man.

“Groups in Toronto, Vancouver, Halifax and Edmonton have begun organizing protests in solidarity with the Occupy Wall Street protesters.”

It’s spreading! Will you be participating? I don’t know, I’ve never found myself so riled up about anything that I felt the need to go and protest.

“Apple fans are amped. The computer and gadget maker is expected to announce a new, more powerful version of its wildly popular smartphone this week – more than a year after it unveiled the iPhone 4.”

So excited!! I hope my iPhone 4 is upgradable at no extra cost (wishful thinking lol).

“Several developers have noted that a message saying that Timelines would automatically publish to the public on September 29 has since been updated to October 6.”

Lol. People are going to be in such shock when their profiles turn Timeline! I think it looks slick though.

SOOOO CUTE. Forgot to include this in my weekend edition of Clicks but this story of a dog and deer is SO cute. <3 A must watch.

I would be terrified if I came across these!!!!!!

“Canada’s combined federal and provincial net debt will pass $1.1 trillion at 11 p.m. ET on October 3… But while some observers are sounding the alarm bells about the country’s balance sheet, others say Canada’s fiscal situation is not nearly as bad as it may seem.”

“The most popular contraceptive for women in eastern and southern Africa, a hormone shot given every three months, appears to double the risk the women will become infected with H.I.V.”

Oh my god. They didn’t realize this before? Before they started injecting women with it? Sheesh.

“Facebook will check every web link its users click on for computer viruses and other dangers as part of efforts to improve the security of the world’s largest social network.”

Good to know. A lot of people are so ignorant about really obvious spam/virus links.

“The real benefit for Amazon in entering the tablet space is the advantage of a direct, established, sales model on Amazon.com versus the rest of its Android competitors. They also have name recognition and a wealth of content behind the device which puts them on a level with Apple.”

Now RIM really is irrelevant. But then…

“While funny, he raises a truthful point: The Canadian government is heavily invested in RIM. With declining sales, and the BlackBerry PlayBook not living up to expectations, it could be bad for the whole country should the company fail.”

“Jest.com aggregates the funniest daily content from around the web and combines it with original videos created by Jest’s staff of award-winning writers and performers.”

I am not even going to link one of Jest’s videos in protest. lol. I loved Today’s Big Thing it was so simple, straight-forward. 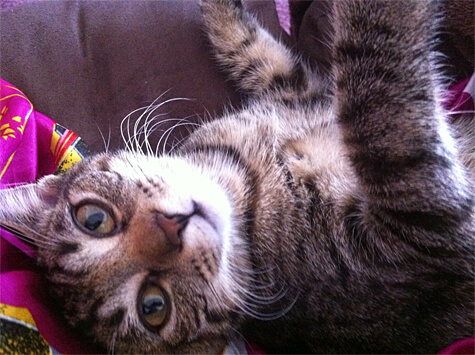 Linda Hoang is a Canadian blogger based in Edmonton, Alberta, who writes about travel, food lifestyle and pet topics. She's also a seasoned social media/digital strategist with a journalism background. Linda loves exploring the world with her husband Mike, eating their way through cities, supporting local businesses, and photographing Instagrammable Walls. She is the founder of the Edmonton International Cat Festival and a fur-mom to two cats and two dogs.
PrevPreviousReview: Lan’s Asian Grill
Next[Video]: Meet Thor the Thunder KittyNext