“How might punctuation now evolve? The dystopian view is that it will vanish. I find this conceivable, though not likely. But we can see harbingers of such change: editorial austerity with commas, the newsroom preference for the period over all other marks, and the taste for visual crispness.”

“Besides selling gas and snacks, Barman’s store is a small power plant that produces as much electricity as it consumes, a goal that energy efficiency advocates call “net zero.” Beaverton Mayor Denny Doyle calls the business at the busy corner of Southwest Murray and Allen boulevards ‘the most sustainable station in America.'”

“An analysis of political contributions by The Canadian Press found the New Democrats have raised more money from estate donations than any other political party. Fifteen people have bequeathed the party more than $400,000 in recent years.”

Crazy. I don’t know about you but I wouldn’t be leaving any of my money to political parties in my will – didn’t these people have family and such to give money to?! lol.

“A Calgary religious group is swapping the good book for gumdrops; the ‘Jesusween’ initiative encourages homes to hand out bibles as well as chocolate bars.”

“In the last year, Alberta Health Services hasn’t moved closer to meeting its eight-hour target, even though it has pushed back its target dates.”

“Complaints sent to Advertising Standards Canada have forced rock station K-97 to yank the ads, which feature a large breasted woman, photographed from the neck down, in a tight white t-shirt and the slogan ‘Pray For More Rain.'”

Lol. People complain too much but yeah this ad wasn’t the best. But when are any K-97 ads really appropriate?

“Lady Liberty is getting high-tech upgrades for her 125th birthday: webcams on her torch that will let viewers gaze out at New York Harbor and read the tablet in her hands or see visitors on the grounds of the island below in real time.”

“Today is the 150th anniversary of the completion of the transcontinental telegraph. From sea to sea, it electronically knitted together a nation that was simultaneously tearing itself apart, North and South, in the Civil War.”

“President Barack Obama, or rather, Obama’s 2012 Campaign, has officially joined Tumblr rounding out his collection of major social networks.”

“Square, a small credit card reader that can process credit card payments on a range of iOS and Android devices, will soon begin selling at Wal-Mart stores throughout the U.S.”

What won’t our phones be able to do in a few years?!

“Researchers in the US say there’s a “shocking” association – if only a statistical one – between violence by teenagers and the amount of fizzy soft drink they drink.”

“One of the world’s most notorious whistle-blowing website is going silent. In a statement on October 24, 2011, WikiLeaks said that it would stop publishing in order to focus on making money – explaining that the blockade imposed by financial companies including Visa, MasterCard, Western Union and PayPal left it with no choice.”

“Pumpkins and Halloween go together like candy and apples, and this orangey globe can light up this frighteningly fun occasion three ways.”

So cute! And such detail – even the tank tracks move!

“While we patiently await the commercial availability of the device that turns drawings into toys, Child’s Own Studio has taken matters into its own hands — literally — designing stuffed animals from crudely-drawn illustrations sent in by children.”

Wow! What a great company! :D 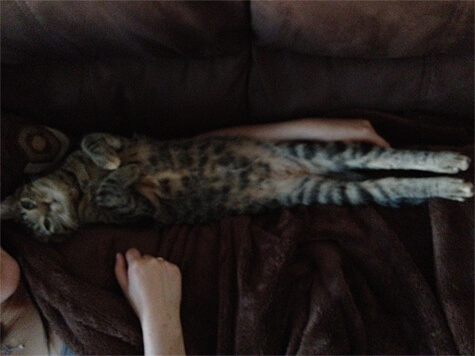 Lol I have the funniest kitty ever!!!

Linda Hoang is a Canadian blogger based in Edmonton, Alberta, who writes about travel, food lifestyle and pet topics. She's also a seasoned social media/digital strategist with a journalism background. Linda loves exploring the world with her husband Mike, eating their way through cities, supporting local businesses, and photographing Instagrammable Walls. She is the founder of the Edmonton International Cat Festival and a fur-mom to two cats and two dogs.
PrevPreviousClicks of the Day: Oct 21, 22, 23 2011 Weekend Edition!
NextClicks of the Day: Tuesday, October 25, 2011 Edition!Next