“Are today’s children facing technology overload, or simply gearing themselves up for life in a digital world?”

Probably a little bit of both. #SometimesEvenIGetTechnologyFatigue

“It seems that despite the bluster and hype, the consumer electronics industry was just as susceptible to the downturn in consumer spending as every other industry.”

Yeah I think we only bought one electronic device this year. When life gets expensive, you just can’t spend money on frivolous items…

“‘The ‘Off-the-Record’ policy of one major market daily I deal with on a regular basis reads something like this: A reporter is permitted to agree to keep certain information off-the-record. However, if either the reporter or his/her editor deems the ‘off-the-record’ information newsworthy then the publication reserves the right to publish that information. Not surprisingly, the paper’s reporters rarely inform sources of the second half of the policy (even if they are aware of it),'”

Interesting! Not that I’ve done any hardcore reporting recently but the way I was taught (and just the way I feel ethically) is that if an agreement for an off the record comment has been made – you should keep it. I don’t think I’ve ever been in a situation where anything off the record was truly groundbreaking/newsworthy that required extra thought into publication or not though so I can see how it would be tough for other reporters in certain situations.

“People will only be able to comment by using their Facebook account, which means their name, often even their photograph, will be linked to the statements they post. BCLocalNews.com is not alone in making this shift. Several media companies, equally troubled by the vitriolic trend of anonymous comments, are turning to Facebook to power their website commenting.”

Good move? Bad move? I think it’s a good idea. Keeps people accountable and gets rid of any derogatory comments that may more likely be made under an anonymous name.

“If this weekend’s attack on students had you wondering how bad pepper spray really is, science writer Deborah Blum has you covered. Answer: It’s five times more intense than the hottest natural pepper in the world. (Commercial pepper spray is twice as intense, but the police-grade stuff is supercharged.)”

Damn. That is not something you want in your eyes. Those poor UC Davis protesters.

And the list goes on! Wow. Apple is dominating the world.

The potatoes thing kind of worries me.

Wow how ridiculous is that!! Pizza is NOT a vegetable, people.

“Not playing on a team sport, not getting in a fight, not spending enough time with dad” … and more!

Well men, would you agree with this list? And if you are regretting some things, remember: It’s never too late! :)

“The world was a dangerous place for the first birds. Palaeontologists have found a fossil bird preserved where the stomach of a dinosaur would have been – the first direct evidence that dinos preyed on their feathered relatives.”

I always assumed anything small back in the day of the dinosaur was up for food grabs but I suppose we always need evidence, lol.

“Two scientists from the Wharton School of Business at the University of Pennsylvania, and a colleague from Berkeley, argue that modern academic psychologists have so much flexibility with numbers that they can literally prove anything.”

Lol. Well with ‘study says this’ and ‘results from a study say that’ – all over the news each and every day, it makes a lot of sense that data from those things can be skewed.

“Of more than 1,100 middle school and high school students surveyed in 2008, 24 per cent said they had ever been “harassed” by texting. That was up from about 14 per cent in a survey of the same kids the year before.”

Just ignore or delete or block, teens. (Can you block contacts on your phone? I’m not sure I’ve ever tried).

“Canadian taxpayers forked out almost $2 million — including more than $1,600 to remove a bed — to spruce up a luxury Muskoka resort for last year’s G8 summit.”

“The law will dramatically increase sanctions for Albertans who drive after drinking… The Canadian Federation of Independent Business says the law will do little to prevent or punish drunk driving, but will have a severe impact on small business.”

I filled in in the editing department today and this was the package I cut! How’d I do? Wish there had been more/better visuals of the guy who is referenced off the top and at the end but other then that I thought it was good, lol. I also cut another package for News Final but it was very stox-boring-viz-heavy so I won’t link it, lol.

“There is a one in three chance of having a false-positive result, and one in every 200 will be falsely diagnosed with breast cancer and unnecessarily treated.”

It sucks when they advise things and then they say nevermind, actually, that’s probably not something you should do.

“Will it be the inevitable third edition to the Pokemon Black and White set of games? Something new altogether? Or perhaps just a new set of Pokemon snuggies?”

“Square Enix has confirmed that legendary role-playing game Chrono Trigger will be released on iPhone and iPod touch next month.”

SQUEEEEAL! So excited!! Chrono Trigger is one of THE greatest RPGs of all time. True story :) And also one of only two RPGs I have ever fully completed, lol.

“‘Chuck Norris is a hunter. But Chuck Norris does not hunt. Hunting would imply the possibility of failure.'”

Lol. I don’t know, he’s so old now it doesn’t really make the game seem that much more macho. I wonder how much he got paid to do the commercial though! (Probably a gajillion dollars).

“Oskar, a blind kitty who was born without eyeballs, plays with toys for the very first time.” 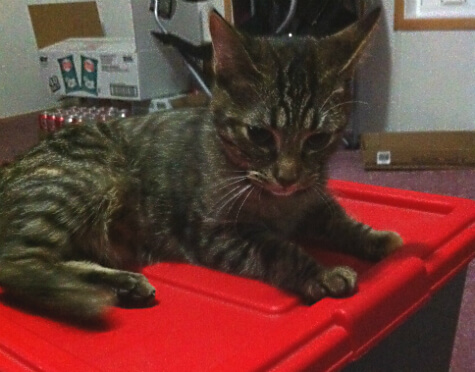 Linda Hoang is a Canadian blogger based in Edmonton, Alberta, who writes about travel, food lifestyle and pet topics. She's also a seasoned social media/digital strategist with a journalism background. Linda loves exploring the world with her husband Mike, eating their way through cities, supporting local businesses, and photographing Instagrammable Walls. She is the founder of the Edmonton International Cat Festival and a fur-mom to two cats and two dogs.
PrevPreviousClicks of the Day: Nov 18, 19, 20 2011 Weekend Edition!
NextClicks of the Day: Tuesday, November 22, 2011 Edition!Next