“Hundreds of protesters gathered at the steps of the Alberta Legislature this afternoon to argue against the new Education Act and how it impacts home schooling in the province… Parents are concerned the new act will infringe on their right to teach their children what they want.”

People will fight for their rights~

“Amid accusations her government operates under a culture of “corruption,” Premier Alison Redford said she was forced to take action against a Conservative MLA who wrote a “bullying” letter to a northern Alberta school board. Dunvegan-Central Peace MLA Hector Goudreau resigned Monday as head of a cabinet policy committee on community development… The letter in question, sent Feb. 9 to the Holy Family Catholic School Division, suggested criticism of the government could imperil the district’s chances of funding for a new school in Grimshaw.”

Tsk. You never put that stuff in writing it will just come back to bite you in the bum, lol.

“Canadians will be able to access their hard-earned money faster after depositing a cheque this August as the federal government makes good on a budget promise. Ottawa is changing its rules to ensure that banks can only hold personal cheques under $1,500 for four days. Currently, banks can hold a portion of the funds deposited for up to seven days.”

“Canadians could have sunk their money into RRSPs and TFSAs, but it looks like they’d rather invest in U.S. real estate instead. For the fourth consecutive year, Canadians account for 23 per cent, or the largest percentage of foreigners buying homes south of the border. That’s up from seven per cent in 2007.”

Well the houses are so freaking cheap down there!!

“Global Edmonton’s Troubleshooter is a winner of the Alberta Consumer Champion awards handed out Monday in Edmonton.”

“Paleontologists in southern Alberta are digging up the fossil remains of a marine reptile that could shed light on creatures that roamed Earth as many as 75 million years ago.”

“Fossils dating back 505 million years preserve the relics of tiny, slithering animals which are the oldest life forms ever discovered with primitive spinal cords. As the precursor of vertebrates the species is also believed to be the direct ancestor of all members of the chordate family, which includes fish, birds, reptiles, amphibians and mammals.”

“The fringes of Antarctica are being invaded by alien plants and tiny animals, scientists have found. Researchers scoured the clothes and boots of tourists and scientists visiting the continent, and found that most were carrying plant seeds. Alien plants already grow on the fast-warming Antarctic Peninsula.”

“More than 25 billion apps have been downloaded from Apple’s App Store, the company has announced in a milestone that highlights the shift to a new model for computing, digital content, software and the web. A release from Apple suggested the 25th billion app downloaded was Where’s My Water? The free version of the Diseny-backed game was installed by Chunli Fu of Qingdao, China. Mr. Fu is said to receive a $10,000 iTunes Gift Card.”

Wow! Wish I had been the 25th billion app downloader!!

“A panel set up to review the events of last year’s nuclear disaster in Japan has released a withering criticism of the country’s nuclear industry and the government’s response to the crisis. The investigation details mistakes made in the aftermath of the massive earthquake and tsunami one year ago which killed tens of thousands of people in Japan and caused the worst nuclear accident in decades.”

“Last year’s tsunami in Japan caused what is estimated to have been the most expensive natural disaster ever, with more than 15,000 lives lost. See before-and-after photos.”

Most areas look relatively okay, besides the lack of buildings. Still so sad what happened.

“The U.S. Department of Agriculture’s Food Safety and Inspection serviced just launched Twitter accounts for specific states that can share news of recalls on poultry, meat and other food products for those specific regions. “These new Twitter feeds provide yet another mechanism for us to provide consumers with critical updates and relevant information they need to protect their families from foodborne illness,” USDA Under Secretary for Food Safety Dr. Elisabeth Hagen said in a statement. “The immediacy of information-sharing through social media is unparalleled, and we believe these timely, targeted updates will better protect public health.””

“After languishing in an archive for 150 years, 500 previously forgotten fairy tales have been rediscovered in the archives of Regensburg, Germany. The folk tales and fairy stories were collected by historian Franz Xaver von Schönwerth, a 19th century contemporary of the brothers Grimm.”

“Terra Nova” is no more — at least on Fox. The Steven Spielberg-produced dinosaur drama has not been picked up for a second season, the network confirms to TheWrap. 20th Century Fox Television, the studio behind the series, is currently looking for a new network home for the show.”

Mike and I actually enjoyed Terra Nova for the most part! Hope it gets picked up by another network.

“The Fourth Annual List Of The Best Delicacies The City Has To Offer.”

“Four plates. One night. Eat food. Meet people. That’s the platform behind Dishcrawl, the latest food trend to hit the city and it’s being welcomed with open arms (and open mouths) by local foodies.”

Have you read/watched my story on Dishcrawl Edmonton yet?? :)

“There are business cards that designers would make it to a point where clients will really spend time looking at them because of their uniqueness or peculiarity. That’s one way of making a brand name successful.”

“Be sent him a new router for his cat to sit on and explained that the best way to figure out her ‘favorite’ would be to plug both in and then attach the DSL cable to the one she doesn’t sit on.”

Lol! This is so funny! Great move by the company, haha. 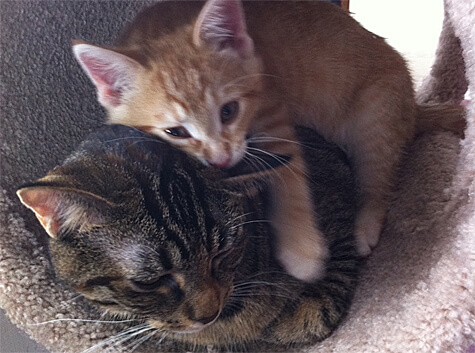 The bestest friends ever!

Linda Hoang is a Canadian blogger based in Edmonton, Alberta, who writes about travel, food lifestyle and pet topics. She's also a seasoned social media/digital strategist with a journalism background. Linda loves exploring the world with her husband Mike, eating their way through cities, supporting local businesses, and photographing Instagrammable Walls. She is the founder of the Edmonton International Cat Festival and a fur-mom to two cats and two dogs.
PrevPreviousFeature Story: Edmonton Dishcrawl brings growing foodie community together for a night of new experiences
NextReview: Dishcrawl Edmonton: Foodie Treats on 124 StreetNext