“Edmonton Police executed two Checkstops over the St. Patrick’s Day weekend and the results were not good. It appears as though drivers are continuing to drink and drive. Police arrested 19 impaired drivers this weekend, up three from last year.”

“In a rare moment of partisan agreement prior to the provincial election, Alberta MLAs have approved an opposition bill that will make it illegal to smoke in vehicles when children are present.”

Definitely for the best but feels kind of Big Brother-y. How much can our government control?

“The wheels on the bus go round and round – positioned squarely at the level of WRP leader Danielle Smith’s chest in what appeared to be a sort of hubcap bustier. The puns played on all day. The Legislature or bust. Even Smith poked wry and good-natured fun at the gaffe on wheels: “Glad to see everyone is so interested in our bus. ;) Guess we’ll have to make a couple of changes huh?” she said on Twitter.”

Lol, this was pretty funny.

“As of April 1, anyone whose name is exactly as it appears on the previous application for a passport, whose passport hasn’t been damaged lost or stolen, and was issued in Canada, no longer needs proof of Canadian citizenship, supplementary identification or guarantor information.”

It took me about an hour to get in and out last time I renewed my passport but I went first thing in the morning. That’s supposed to be the quickest time. (Though as of April 1 hopefully at any time should be a good time).

“Air Canada says it could be forced to cancel flights and strand thousands of passengers if a maintenance company that obtained creditor protection Monday is unable to complete repairs to several planes.”

“The parents of an unarmed African American teenager who was shot dead in Sanford, Florida, last month are formally calling on the FBI to take over the investigation as they have lost confidence in the local police and prosecutors. Trayvon Martin, 17, was fatally shot by a Hispanic neighbourhood watch volunteer George Zimmerman, who has admitted the killing, claiming self-defence. But three weeks later, Zimmerman, 28, has not been charged, sparking accusations of racial stereotyping and poor investigation.”

“Night owls, insomniacs, shift workers and other denizens of the dark are finding less need to fit their workout time into the nine-to-five world. More gyms are remaining open round the clock, experts say, spurred by advances in surveillance and security technology, clients’ ever more fluid work habits and a generation of multi-tasking consumers. ‘A lot of people work untraditional times and they take advantage of clubs open at all hours.'”

But waking up early to work out is so hard… lol.

“Tuberculosis is often seen in the wealthy West as a disease of bygone eras — evoking impoverished 18th or 19th century women and children dying slowly of a disease then commonly known as “consumption” or the “white plague”. But rapidly rising rates of drug-resistant TB in some of the wealthiest cities in the world, as well as across Africa and Asia, are again making history.”

“Canadians are among the most active social networkers in the world, but they would still rather do their shopping offline in the comfort of a bricks-and-mortar location, according to a new research report that places Canada’s Internet economy in the middle of the pack among its Group of 20 peers.”

“Article recommendations from your friends on Facebook and Twitter aren’t a major source of traffic for news websites, according to Pew’s State of the Media 2012 report — but they have potential to become one. Journalists have flocked to Twitter, says Pew, giving it “outsized influence” in the media game. Its ability to disseminate breaking news before traditional wire services gives it a “critical role” in journalism. [But] . Only 9% of the average news organization’s traffic comes from social media and 9% of online consumers of news in the U.S. “very often” get their news via Facebook or Twitter.”

Small percentage but will only keep rising.

“Mobile devices often get accused of alienating people from the world around them. But for U.S. teens, cell phones (especially text messaging) are a key way to stay connected with friends and other people in their lives, according to new research from the Pew Internet & American Life Project. Pew found that 63% of all teens say they exchange text messages every day with people in their lives, including their parents. Also, nearly half of all teens send and receive text messages with friends daily.”

But free apps are the only ones I get! #BatteryDrainer

“Having already become the ire of mom-and-pop coffee shops, Starbucks has been exploring ways to compete with your local watering hole. And now it looks like they’re poised to take over your juice spot, too. The coffee chain opened its first Evolution Fresh juice bar location today in Bellevue, Wash… Starbucks is maneuvering to enter the health-food sector, Reuters reports, and the company hopes the juice chain will be the key to getting them there.”

I have never been keen on paying for drinks. I’m good with water! Though I know my actions are not the norm so I imagine this juice business will get quite a bit of business.

“Even as workplace technology and processes steadily improve, many professionals feel less productive than ever. It may seem a paradox, but these very tools are undermining our ability to get work done. They are causing us to become paralyzed by the dizzying number of options that they spawn. Workers need a set of best practices that is sorely lacking in the professional world. Without it, we are seeing a growing angst — even a sense of desperation — in the workplace, as more employees feel that there is no rest and no way out.”

“Debate about the abilities – and the basic rights – of aging workers is coming to the fore in this country as Canadians increasingly work later into their traditional retirement years… Recent federal discussions about raising Old Age Security eligibility from 65 to 67 have many older workers worried about their retirement… But will employers want older workers around? Al-ready, the aging workforce is forcing organizations to wrestle with such uncomfortable issues as seniors’ ability to keep up with job demands, the degree to which physical or mental deterioration can compromise performance, and the cost to companies’ bottom lines if a large segment of their staff is silver-aged.”

I am so excited to see this movie!!! Such great books.

LOL this is so funny/bizarre! But yes it would be very annoying if you’re trying to have a serious conversation with the guy. 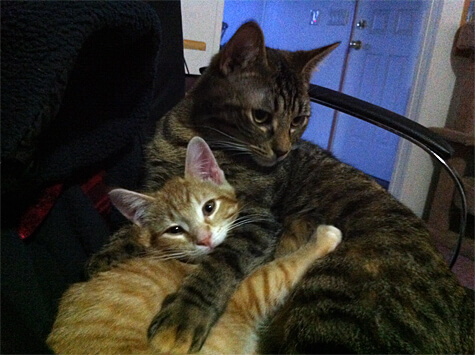 They love each other!

Linda Hoang is a Canadian blogger based in Edmonton, Alberta, who writes about travel, food lifestyle and pet topics. She's also a seasoned social media/digital strategist with a journalism background. Linda loves exploring the world with her husband Mike, eating their way through cities, supporting local businesses, and photographing Instagrammable Walls. She is the founder of the Edmonton International Cat Festival and a fur-mom to two cats and two dogs.
PrevPreviousClicks of the Day: March 16, 17, 18 2012 Weekend Edition!
NextClicks of the Day: Tuesday, March 20, 2012 Edition!Next