“With the city and region in the midst of a major heat wave, rolling blackouts have hit Edmonton, knocking out power in neighbourhoods across the city. Epcor spokesman Tim LeRiche confirmed the outages and said they are temporarily shutting off power in rotating areas of the city in response to a directive from the province to reduce power use. LeRiche said the directive came from the Alberta Electric System Operator.”

These rolling outages sure caused outrage on The Twitter~ I surprisingly was unaffected both in my own home and during my commute home – didn’t hit one affected traffic light! Woot woot.

“Edmonton police have issued a warrant for a man, who is wanted on a number of charges – after a fire tore through a southside apartment building over the weekend. Police are searching for Zachary Holland, 25, who is wanted on 13 charges, including attempted murder, and four counts of arson causing injury. The warrant was issued partially in connection to the fire that broke out in an apartment building in Old Strathcona Sunday.”

“A proposal for a potential new station on Edmonton’s south LRT line was shot down by the city Monday. The idea for an additional station was brought up by Coun. Don Iveson and briefly debated in Monday’s Transportation Committee meeting. ‘I said earlier it was not at the conceptual stage but at the napkin stage,’ said Iveson, after a request for administration to look into station costs was shot down by the committee. ‘I think it’s fair to say the napkin’s been folded up and put into the pocket for later consideration.'”

A stop there would probably be nice but yeah probably priority should go towards getting the LRT running to other areas of the city first.

“Tighter mortgage rules came into effect today, but if the results of a new poll are any indication, almost half of Canadians were not aware the system was changing. In a bid to rein in the market, Finance Minister Jim Flaherty has introduced regulations that make it tougher for Canadians to take out a loan or purchase new homes. The changes whittle the maximum amortization period for government insured homes down to 25 years from the previous 30 years. As well, lenders have been limited to only issuing home equity loans up to a maximum of 80 per cent of a property’s value.”

We’ll see how this affects us in a few years when we start looking for our “sturdy” home.

“A new survey finds that Canadians’ habit of eating out for lunch, rather than brown-bagging it, is taking a major bite out of their disposable income. The survey from Visa Canada finds that a whopping 61 per cent of Canadians choose to buy their lunch once a week or more, spending between $7 and $13 on average. Another 9 per cent appear to have richer tastes, spending between $14 and $25 on their lunchtime meal. ‘That can add up over the course of a year.'”

I always bring my lunch!!!

“A B.C. Mountie has launched a second lawsuit against the RCMP. In her latest suit, Const. Karen Katz says the harassment and abuse from her co-workers — which included sexual comments, jokes about her weight and practical jokes — led to health problems, such as bulimia and post-traumatic stress disorder. In an interview with The Province newspaper on the weekend, Katz called the work environment “toxic.” She said the second lawsuit came after there was pressure for her to return to work. She has been on medical leave since Feb. 4, 2009.”

“This past weekend two children in Indiana were left in hot cars. One infant died and a toddler was rescued, but suffered a heat-related seizure and was in critical condition. The infant was 3-months-old and the toddler is 16-months old.”

AWFUL. Why. Why. Why do people leave their children in their cars ? In this heat ? And while we’re on the topic – stop bringing your damn pet with you when you go run errands ESPECIALLY WHEN IT’S THIS HOT OUT! I don’t understand why this concept is so hard for people to understand!

“International envoy Kofi Annan tried to breathe new life Monday into his moribund peace efforts in Syria, saying he has reached a new framework with President Bashar Assad and would discuss it soon with rebel leaders. Opposition activists raised the death toll in the conflict to more than 17,000.”

“A deadly form of a common childhood illness called hand, foot and mouth disease is thought to be behind a mysterious spate of child deaths in Cambodia, health officials said Monday. Lab tests have confirmed that EV-71, one of several viruses known to cause the disease, is to blame for a good portion of the 59 cases that have been reviewed since April, according to a joint statement from the World Health Organization and Cambodian Health Ministry. Those illnesses have resulted in 52 deaths.”

“The state Supreme Court says obesity qualifies as an impairment in some cases under the Montana Human Rights Act, potentially allowing obese people to seek greater protection against discrimination. The divided court handed down the ruling Friday in a case between Eric Feit and Burlington Northern Santa Fe Railway, finding that if a person’s weight is outside the normal range and affects one or more body systems, it may constitute a physical or mental impairment — even if it’s not a symptom of some underlying disease or health condition.”

“How a woman rides her bike can affect her enjoyment of sex, a new study has found. The report, which appears in the Journal of Sexual Medicine, has found the position of the handlebars can affect genital sensation in female cyclists.”

“Can’t touch your toes? Laugh it off. Laughter yoga, unlike Pilates yoga, water yoga, aerial yoga and other offshoots of the ancient eastern practice of uniting body and breath, doesn’t aspire to sculpted arms and bendy backs. Laughter yoga just wants you to be happy.”

Still waiting to hear about laughing yoga hit Edmonton! First heard about this a year ago. Would make for a very fun story. Think of all the laughing nats! ;)

“Online College collected data and created this infographic about mobile bad manners. We think you’ll blush at how relatable these stats can be. Among them, a Mashable favorite: 10% of people under 25 admit to texting during sex.”

What the heck!!! Also “90% of cell phone users think they have excellent mobile manners” – ummm. Not. (Myself included, at least I can admit I reach for my phone too much!!)

“Fears that a computer virus might cut Internet access around the world appeared to be overblown on Monday after U.S. authorities removed a safety net that had protected infected machines for months. Shortly after midnight EDT, the authorities cut off computer servers in New York City that had been put in place to direct traffic for infected computers, which would have been unable to access the Internet without their help. Some blogs and news reports had warned that the shutdown of the servers could trigger a potential “blackout” and described the malicious software as the “Internet Doomsday” virus. But that did not happen.”

“Amazon.com is developing a smartphone that would vie with Apple’s iPhone and handheld devices that run Google’s Android operating system, two people with knowledge of the matter said.”

Don’t people know, nothing can go up against Apple? Lol.

“Computers running on the next version of Microsoft’s Windows operating system will go on sale in October. Microsoft Corp. announced the time frame for Windows 8’s mass-market release Monday at a company conference in Toronto.”

“In southern China, police intercepted three foreigners trying to sneak over the border with precious cargo — more than 3,600 crocodiles. By the time police arrested the smugglers, 42 of the Siamese crocs (an endangered species) had died of dehydration and overheating. But if the police hadn’t intervened, the rest would have met an equally gruesome fate, as dinner for the culinarily adventurous in Guangdong province.”

Stupid smugglers. Leave the animals alone. Glad most of them were saved.

“26 years after a global moratorium on commercial whaling was put in place, South Korea’s decision to resume hunting whales for scientific research has dismayed environmental campaigners and stunned other members of the International Whaling Commission (IWC). South Korea made the shock announcement at a meeting of the IWC last week.”

“Oceans’ rising acid levels have emerged as one of the biggest threats to coral reefs, acting as the “osteoporosis of the sea” and threatening everything from food security to tourism to livelihoods, the head of a U.S. scientific agency said Monday. The speed by which the oceans’ acid levels has risen caught scientists off-guard, with the problem now considered to be climate change’s “equally evil twin,” National Oceanic and Atmospheric Administration chief Jane Lubchenco told The Associated Press.”

“Two new scientific papers have disproved a controversial claim made by NASA-funded scientists in 2010 that a new form of bacterial life had been discovered that could thrive on arsenic… ‘I don’t know whether the authors are just bad scientists or whether they’re unscrupulously pushing NASA’s ‘There’s life in outer space!’ agenda.'”

“A video produced by National Australia Bank celebrating Good samaritans has gone viral. Filmed using hidden cameras, the clip follows the antics of regular people who decide to return a pair of sunglasses that they find near the entrance of a shopping center. A fake lost-and-found booth is assembled in the mall and a pair of sunglasses are planted strategically on the ground. Several people are then shown picking up the sunglasses and handing them over to the person manning the lost-and-found counter. Instead of a simple thank you, the good deed is rewarded with unexpected recognition. As they walk through the shopping center, their names and faces begin appearing all around them. From advertising screens to the icing of a cake, their simple act of kindness is celebrated for everyone to see.” 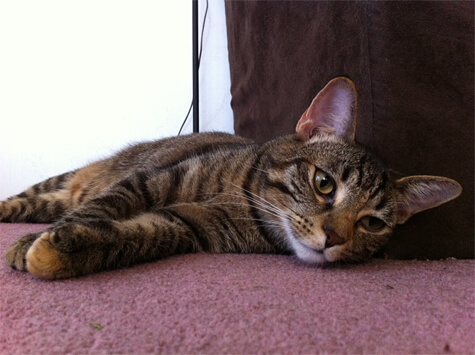 Thor and Loki are just sprawled out trying to beat the heat. (Loki not pictured as he is beating the heat by laying in another part of the home, lol).

Linda Hoang is a Canadian blogger based in Edmonton, Alberta, who writes about travel, food, lifestyle and pet topics. She's also a seasoned social media/digital strategist with a journalism background, the founder of the Edmonton International Cat Festival and co-founder of Stop Race Based Hate, an online anti-racism education tool. Linda loves exploring the world with her partner Mike, eating their way through cities, supporting local businesses, and photographing Instagrammable Walls. Linda is a fur-mom to two cats and two dogs.
PrevPreviousClicks of the Day: July 6, 7 & 8 2012 Weekend Edition!
NextSocial Media Column: ‘Cash mobs’ boost for local economyNext