Check out the CTV Edmonton feature page for Black Friday’s 25th anniversary! (I had nothing to do with it but it’s still worth looking at ;)) Scary. I hadn’t been born yet when this happened.

“Northlands is mulling over a different format for next year’s summer fair to go along with its new name. Northlands spokeswoman Jennifer Sheehan said Monday the fair will likely feature events spread across the city in 2013 as a means of building community support.”

“‘They say an army marches on it’s stomach, well so does a city in my opinion and Edmonton is certainly marching forward with a growing appetite and Eat St. is happy to feed that need by highlighting the biggest and best food trucks around.'”

“Days after a blue-green algae advisory was issued for the popular destination for Edmontonians – officials are pinning at least part of the blame on an influx of human activity in the area over the years.”

Though warnings don’t appear to be keeping people out.

“Canada’s one-cent coin has been granted a brief reprieve from the scrap heap in order to placate retailers worried about a lack of pennies during the late 2012 holiday season. The federal government announced Monday it is postponing plans to stop circulating the one-cent coin this fall and will instead end distribution in February, 2013.”

The penny is persevering!

“Hundreds of current and former female Mounties have come forward to join a class-action lawsuit alleging harassment within the ranks of the RCMP. The lawsuit — filed by 19-year RCMP veteran Janet Merlo — will be heard in B.C. Supreme Court starting Thursday. Merlo’s lawyers expected dozens of other women to come forward after Merlo filed suit in March but attorney Jason Murray says more than 200 people have contacted his firm to join the lawsuit.”

“Prosecutors filed formal charges Monday against Colorado shooting suspect James Holmes, who is accused of killing 12 people and wounding 58 others at a midnight movie screening. Holmes has been charged with 24 counts of first-degree murder and 116 counts of attempted murder related to the shooting rampage in the Denver suburb of Aurora.”

That’s a lot of counts…

“AIDS researchers are still buzzing about a finding announced at the International AIDS Conference in Washington last week that provides insight into how an eventual cure for HIV/ AIDS might be developed. Presented as a “late-breaker” finding on Thursday, Boston researchers described the cases of two HIV-positive patients who underwent bone marrow transplants and later developed undetectable levels of HIV in their blood. The two cases are reminiscent of the so-called “Berlin patient,” Timothy Brown, the only person known to have been cured of infection… Kuritzkes and his team say it is too early to call the patients “cured,” because the men are still taking HIV drugs. But the results are intriguing to AIDS researchers.”

“Games organizers are blaming Twitter users for overloading data networks with their tweets, as they attend the London Summer Olympics. According to organizers, the deluge of tweets has already disrupted TV coverage of the cycling road races. Each competitor’s bike has a GPS chip, which transmits vital data to chart their progress in the race. Commentators were apparently unable to advise viewers of the positions and timings of the racers, because the data could not get through from the GPS satellite navigation system.”

“Twitter Inc and NBC Universal’s move to suppress a British reporter’s tweets related to the network’s Olympics coverage may have backfired after the incident became fodder for Twitter chatter around the world on Monday. The microblogging service suspended Guy Adams, the Los Angeles correspondent for London-based daily The Independent, after he sent a tweet on Friday revealing NBC Olympics President Gary Zenkel’s email address. Adams was among a number of Twitter users in the United States who vented their frustration with NBC, a Comcast Corp subsidiary, for showing the London Olympics’ opening ceremony on tape delay to coincide with evening prime time in the United States. “The man responsible for NBC pretending the Olympics haven’t started yet is Gary Zenkel. Tell him what u think! Email: Gary.zenkelznbcuni.com,” Adams tweeted. As part of his suspension, Adams’ account and his tweets were rendered invisible. But in a twist of irony, the incident went viral on Monday, as “Guy Adams” became a worldwide trending topic on Twitter.”

“Are you fond of connecting with Twitter followers on Instagram? Well, unless you already synced up your accounts and followed everyone you wanted to, you’re out of luck. Twitter no longer allows Instagram to access its API and pull in “friends from Twitter.” The move does not bode well for apps seeking frictionless sharing with the platform in the future.”

“Canadian scientists say they’ve made a robot that not just walks on water like the water strider insect but leaps over the surface like its living counterpart. A number of tiny robots that can walk on water have been developed that could skim across lakes and other bodies of water to monitor water quality or conduct surveillance operations, but none have been able to make leaps across the water as a water strider does.”

“A young man talking on a cellphone meanders along the edge of a lonely train platform at night. Suddenly he stumbles, loses his balance and pitches over the side, landing head first on the tracks. Fortunately there were no trains approaching the Philadelphia-area station at that moment, because it took the man several minutes to recover enough to climb out of danger. But the incident, captured last year by a security camera and provided to The Associated Press, underscores the risks of what government officials and safety experts say is a growing problem: distracted walking. On city streets, in suburban parking lots and in shopping centers, there is usually someone strolling while talking on a phone, texting with his head down, listening to music, or playing a video game. The problem isn’t as widely discussed as distracted driving, but the danger is real.”

I surely believe it!

“Gay marriage is generating millions of dollars for New York City’s economy. Since gay marriage was legalized in New York state a year ago, marriage license fees, local celebrations and wedding-related purchases have boosted New York City’s economy by $259 million, Mayor Michael Bloomberg and City Council Speaker Christine Quinn announced Tuesday. “Marriage equality has made our City more open, inclusive and free — and it has also helped to create jobs and support our economy,” Mayor Bloomberg said in a statement.”

“The four-year-long drought that affected western Canada and the U.S. at the turn of the century was the worst to hit the region in 800 years, say scientists who warn that dry spell was nothing compared to the “megadroughts” still to come.”

“Modern culture emerged in southern Africa at least 44,000 years ago, more than 20,000 years earlier than anthropologists had previously believed, researchers reported Monday. That blossoming of technology and art occurred at roughly the same time that modern humans were migrating from Africa to Europe, where they soon displaced Neanderthals.” 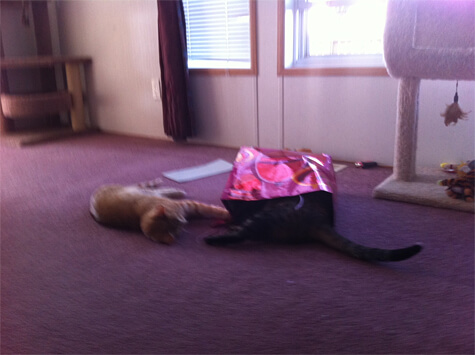 Thor and Loki love them some bags!

Linda Hoang is a Canadian blogger based in Edmonton, Alberta, who writes about travel, food, lifestyle and pet topics. She's also a seasoned social media/digital strategist with a journalism background, the founder of the Edmonton International Cat Festival and co-founder of Stop Race Based Hate, an online anti-racism education tool. Linda loves exploring the world with her partner Mike, eating their way through cities, supporting local businesses, and photographing Instagrammable Walls. Linda is a fur-mom to two cats and two dogs.
PrevPreviousClicks of the Day: July 27, 28, 29 2012 Weekend Edition!
NextSocial Media Column: Kindness to be found on social mediaNext