“Calls for a public inquiry are mounting as the list of federal candidates claiming they were targeted by deceitful robocalls and other voter suppression tactics continued to grow on Monday. Another three federal candidates added their names to the ever-lengthening list of places bombarded by election day calls directing voters to non-existent polling stations. As numbers of affected ridings broaden, so did reports of the types of voter suppression tactics used during the 2011 election. Along with robocalls, candidates are complaining that they were bombarded by live calls harassing voters at all hours of the night or during religious holy days.”

“A Garneau-area woman says her next-door neighbour came to her house Sunday morning, bleeding, barely able to speak, and pleading for help… The injured woman died in hospital Sunday night. Police, who called the death suspicious, have a 28-year-old man in custody.”

“Single parents, new immigrants and those in the skilled trades are among the Canadians least likely to cast a ballot, a Statistics Canada survey suggests. And one researcher says that’s a worrying trend for democracy.”

Understandable. But everyone should vote so we aren’t left with a failure of a government.

“A new study says rich people are more likely to engage in unethical behaviour than their poorer counterparts — like cutting off motorists, lying in a negotiation and cheating to win a prize.”

“In a new video, hacker group Anonymous says they’re giving Vic Toews seven days before they reveal a new scandal about the Public Safety Minister… The video’s message blasts Toews for his support of online surveillance Bill C-30, about which Toews has said he’s “open to amendments.” According to Anonymous, that’s not good enough. The video also claims that the bill is being disguised as a way to protect victims of child pornographers, but actually serves a more wide-reaching purpose.”

This is all very interesting to watch unfold. I wonder what will happen next.

“Interim Liberal leader Bob Rae has admitted a Liberal staffer was behind the Vikileaks30 Twitter account that aired details of Public Safety Minister Vic Toews’s divorce in retaliation for an online surveillance bill, and that the staffer has resigned. A subdued Rae, who identified the staffer as Adam Carroll, made the admission in the House of Commons on Monday afternoon before offering Toews an unconditional apology.”

“Obesity among the nation’s children has reached historic highs, with diseases once associated with the middle-aged now affecting teenagers and young adults, Canada’s top doctor warned Monday. ‘Canada is facing an obesity epidemic. Never in our nation’s history have the overweight and obesity rates in children been this high… The risk is that this will be the first generation of children not to live as long or as healthy as their parents. That indeed is a great tragedy.'”

“It may be possible to one day create an “unlimited” supply of human eggs to aid fertility treatment, US doctors say. One British expert said the study re-wrote the rule book with “exciting possibilities” for improving fertility.”

Seems like things could go wrong with this scenario.

“A large extinct penguin has been reconstructed from fossil remains discovered in New Zealand. Researchers used bones from two separate examples of the ancient birds, using the skeleton of a modern king penguin as a guide. They show the 25 million-year-old Kairuku penguin was tall at 1.2m (4ft 2ins), with an elongated beak and large flippers.”

“British scientists have found that a species of flatworm can overcome the process of ageing to become potentially immortal. They say their work sheds light on the possibility of alleviating ageing and age-related characteristics in human cells.”

That’s the problem with humans, trying to do whatever it takes to live forever.

“Users of online social network sites such as Facebook are editing their pages and tightening their privacy settings to protect their reputations in the age of digital sharing, according to a new survey. About two-thirds, or 63 percent, of social networking site users questioned in the Pew Research Center poll said they had deleted people from their “friends” lists, up from 56 percent in 2009.”

“Though carrier billing is nothing new, Facebook has essentially brought about an entire app store ecosystem, and it’s an ecosystem that doesn’t care what OS you’re using or who made your phone… now, perhaps, it’s time for developers to see Facebook as something more than an alternative and instead as a major player in the mobile applications space.”

Interesting. I honestly never play any games or use any apps on Facebook though but obviously there are many who do.

“To protect itself from copyright lawsuits, and appease disgruntled photographers and publishers, the young social media company introduced a snippet of code Monday that website owners can now add to their sites to prevent unwanted pinning. If a person on Pinterest attempts to share something from a site with that code in place, she will see a message that reads: ‘This site doesn’t allow pinning to Pinterest. Please contact the owner with any questions. Thanks for visiting!'”

A good move on Pinterest’s part.

“Since the invention of radio more than a century ago, man has been broadcasting into space in the hope that any listening aliens could learn of our presence. Yet, despite waves travelling a distance of 200 light years in all directions, they still have 118,800 light years to go until the entire Milky Way has heard the word. In the photograph below, the small yellow dot – with the even tinier Planet Earth buried somewhere in its centre – reveals the limited extent of broadcasts since Marconi invented the radio in 1895.”

Interesting to see it laid out like that, lol. It’s true though. I remember learning about this on Through the Wormhole, lol.

“Some people devote their lives to ending world hunger, some to lifting children from poverty, and still others to getting Leap Day the respect it deserves. The cause may seem frivolous but it is not the least bit trivial to leapers, those born on February 29, a date that appears on calendars once every four or sometimes eight years. Leapers face a range of troubles over their birthdays, from computer snafus to police suspicion during traffic stops to hearing about delivery room negotiations to alter their birth certificate to a day earlier or a day later.”

Lol fun read. I’m glad I’m not a Leap Year baby. Sounds like too much of a hassle… :)

“Today, in a press release, J.K. Rowling’s Pottermore announced a Harry Potter “e-book and digital audiobook distribution agreement with OverDrive for public and school libraries.” According to the Associated Press, Pottermore is “an immersive online environment that combines elements of a role-playing game and a digital encyclopedia with social networking and an online store.” It’s also the only place readers will be able to purchase the eBook version of the Harry Potter series.”

Will be news when it actually happens, lol.

“Jan Berenstain, who co-created the beloved Berenstain Bears book series with her husband Stan, passed away Friday after suffering a stroke. She was 88.”

Sad. But I’m sure she lived a full life. I loved the Berenstain Bears! Although I always thought it was weird that Brother and Sister bear’s names were Brother and Sister, but everyone else has real names, lol. 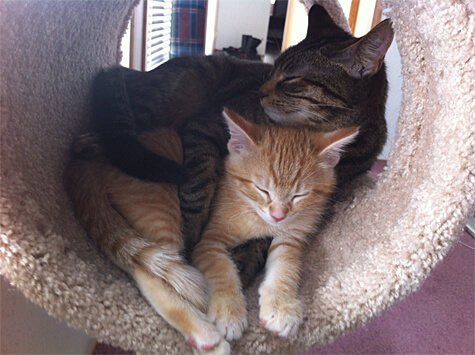 Hehe!! Look how Thor’s arms are wrapped around Loki.

Linda Hoang is a Canadian blogger based in Edmonton, Alberta, who writes about travel, food, lifestyle and pet topics. She's also a seasoned social media/digital strategist with a journalism background, the founder of the Edmonton International Cat Festival and co-founder of Stop Race Based Hate, an online anti-racism education tool. Linda loves exploring the world with her partner Mike, eating their way through cities, supporting local businesses, and photographing Instagrammable Walls. Linda is a fur-mom to two cats and two dogs.
PrevPreviousReview: Banzai
NextReview: MikadoNext