“Whitney Houston was underwater and apparently unconscious when she was pulled from a Beverly Hills hotel bathtub, and she had prescription drugs in her room, authorities said Monday. Authorities said that there were no indications of foul play and no obvious signs of trauma on Houston’s body but that it could be weeks before the coroner’s office completes toxicology tests to establish the cause of death.”

“Another big change is eliminating the interest charges during the grace period after a student graduates. Currently students are given a 6 month period where they don’t have to pay off the loan, but interest still accumulates. As of August 1st, that 6 month grace period will be interest free.”

Um, can interest on loans previous to this be given back to us please??

“The move will cost Alberta Health and Wellness $20 million this year, but will save the province money, in part because pharmacists will be paid $20 for each renewal compared to the $35 currently paid to doctors for the same job. That will free up doctors to spend more time with other patients.”

“The Conservative government isn’t backing down from a plan to require telecommunications companies to hand over customer information to police without a court order despite strong objections from Canada’s privacy watchdogs, Postmedia News has learned.”

Don’t you just love our government.

“In an eight-page report released Monday by the Ontario English Catholic Teachers Association, the group recommends that schools across the province stop the installation of new Wi-Fi networks, which presents a “hazard in the workplace.” The review, which took 10 months to complete, also urged that computers be connected to the Internet only via hardwired connections to limit the “expanded use of wireless devices” in Catholic schools. “We think there is enough evidence to bring concerns and raise the question.”

So. Silly. Wi-fi is here to stay, people.

“Physicists have come up with an equation that explains and predicts the shape of a ponytail. The report in Physical Review Letters journal could help scientists better understand natural materials, such as wool and fur.”

This would fall under the “I can’t believe we’re spending money on these kinds of studies” category, lol.

“Maybe Justin Timberlake and friends weren’t so crazy after all. Myspace, the once dominant social-networking site that faded into obscurity during Facebook’s rise to dominance, added 1 million new users over the past month, according to the company. “The numbers tell an amazing story of strong momentum and dramatic change for Myspace,” said Tim Vanderhook, CEO of Myspace. “And the 1 million-plus new user accounts we’ve seen in the last 30 days validates our approach.””

“Google, whose Android software is the top operating system for Internet-enabled smart phones, said in August that it would buy phone-maker Motorola for its 17,000 patents and 7,500 patent applications, as it looks to compete with rivals such as Apple and defend itself and Android phone manufacturers in patent litigation.”

But no matter how hard any company tries, they cannot take down Apple!! Also applies to this:

“Microsoft is plotting its first physical store in Canada, playing catch-up to archrival Apple Inc. in a race that mirrors the one for smartphone supremacy. With only 14 stores in the U.S., Microsoft is making a big push to expand its chain, emulating a strategy Apple tapped into more than a decade ago.”

“While news organizations have worked hard to persuade their print and TV advertiser ‘to buy space across multiple platforms, there is little evidence that they had succeeded.'”

“Chris Brown’s return to the Grammy Awards three years after assaulting his then-girlfriend Rihanna was an affront “to every woman who has been, is or will be on the receiving end of domestic violence,” Sasha Pasulka argues.”

Agreeed. Is everyone just forgetting the fact that he’s a woman beater? Have disliked him since that day. Do not care for his music any more either!

“Sure, the Grammys belonged to Adele on Sunday night. And Whitney Houston’s death cast a long shadow over the celebration. But there were a number of other surprises that you might not have noticed” including “Coldplay’s Chris Martin is so bad at singing, people would rather listen to commercials” – “The Grammys <3 electronic music" - and more. Lol I did notice most of the items listed.

Unbelievable! Actually, no it is believable, but it’s sad.

“The most romantic day this February may not be Valentine’s Day. Hundreds of years ago, an obscure British custom designated Feb. 29 as the one day when women could propose to their beaus.They couldn’t vote and had few rights, but every four years women had the power over their romantic destiny. That extra special day is rolling around in 2012, but are today’s empowered women any more likely to pop the question than their oppressed matriarchs?
The evidence is mixed. ”

Interesting! I didn’t know about that :) Personally I’ll always feel like the man should propose, lol.

“With this special bathtub, you can literally (and literarily, yes!) bathe in books. Built by Vanessa Mancini, the tub “is made entirely out of books which Vanessa cut and fitted together over a metal frame to form a bath of books, which is suspended by four antique bath tub, lion-shaped feet. She intends to later cover it in layers of resin and has already applied proper taps and drain, so that it will be a utilizable, functional bath at all effects.””

“A ram and a deer are set to be “married” at a zoo in south-western China on Valentine’s Day, state-run media report. Changmao the ram and Chunzi the doe’s “unconventional relationship” have made them popular with the public.”

“Nylah the kitten tries to make the leap to the couch, comes up short.”

LOL. What a fail. 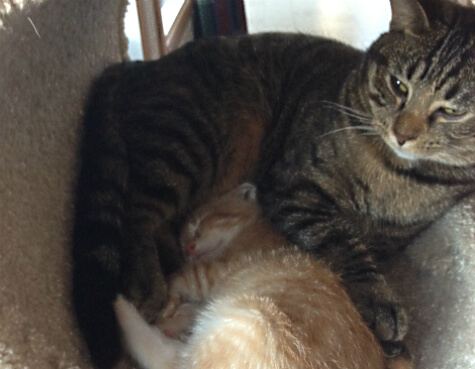 Linda Hoang is a Canadian blogger based in Edmonton, Alberta, who writes about travel, food lifestyle and pet topics. She's also a seasoned social media/digital strategist with a journalism background. Linda loves exploring the world with her husband Mike, eating their way through cities, supporting local businesses, and photographing Instagrammable Walls. She is the founder of the Edmonton International Cat Festival and a fur-mom to two cats and two dogs.
PrevPreviousClicks of the Day: Feb. 10, 11, 12 2012 Weekend Edition!
NextClicks of the Day: Tuesday, Feb. 14, 2012 Edition!Next