“More than 300 people came out to Canyon Creek on Sunday where a permanent memorial for the Slave Lake wildfire’s only casualty was unveiled. They gathered to honour pilot Jean-Luc Deba, who crashed his helicopter while trying to fight last year’s blaze. A memorial park in Canyon Creek now stands in Deba’s name.”

Very nice memorial to have. He should be honoured and remembered!

“A 50-year-old man has been charged in connection to a series of fires set on the city’s south side Saturday.”

I don’t understand why people do the things they do.

“A 12-year-old girl has died after being pinned by an ATV in a rural area near Cadomin, Alta., west of Edmonton… Police say the ATV had flipped over and pinned the young driver. The girl was wearing a helmet but died at the scene.”

Really sad. Two other people injured in an ATV crash this weekend too and then a few other ATV-related crashes a couple weeks ago. Ride safer, please everyone.

“The Alberta government acknowledges it likely missed its 2010 greenhouse gas emissions reduction goal and is now revamping the province’s overall climate-change strategy to meet future targets. Alberta Environment said Tuesday the province didn’t meet its goal of reducing emissions by 20 megatonnes below business-as-usual projections in 2010, although final audited numbers have yet to come in.”

“A final last-ditch attempt between Air Canada and its pilots to work out a new contract on their own came to a crashing halt Saturday as talks fell through and arbitration appeared the last resort. The union representing Air Canada pilots issued a news release Saturday indicating that 10 days of negotiations failed to produce a deal and the dispute was to go to arbitration.”

“Canadians are used to hearing their country ranks among the world’s best places to live, but new research suggests that quality of life can depend a lot on where you live. The first-ever quality-of-life comparison of provinces and territories to other countries suggests that while most Canadians live as well as anyone in the world, others are well down the list… The researchers found that British Columbia, Alberta, Ontario and the Northwest Territories — jurisdictions home to the majority of Canadians — are in a five-way tie for third spot overall with the Netherlands. Norway and Australia ranked marginally higher. Other provinces and territories aren’t far behind.”

“Canada has become the first country to greenlight the world’s first approved drug that has stem cells as its active ingredient, offering hope to children suffering from an extremely painful disease that kills up to 80 percent of children affected.”

“The union representing 4,800 running trades workers at Canadian Pacific Railway Ltd. has served strike notice and say they are prepared to walk off the job as early as Wednesday if a new labour agreement cannot be reached. The Teamsters Canada Rail Conference, which represents conductors, yardmen, locomotive engineers and rail traffic controllers at the railway, also warned that there might be interruptions to commuter rail lines in Toronto, Montreal in Vancouver, in the event of a labour disruption.”

Are no workers happy with their employers these days?

“Prime Minister Stephen Harper will soon tell Canadians what the country’s future role will be in Afghanistan after 2014 when foreign troops are scheduled to leave, the defence minister says. “The prime minister, I can assure you, will be making an announcement very soon with respect to Canada’s participation beyond 2014 in Afghanistan,” Defence Minister Peter MacKay told CTV’s Question Period Sunday. Canada has about 950 soldiers currently serving in Afghanistan, working on training the nascent Afghan security force, soon to be about 352,000 strong. But the size of the Afghan military will shrink to around 230,000 in a year or so after it takes on full security responsibilities at the end of 2014.”

“US President Barack Obama opened a NATO summit Sunday saying the world backed his plan to end war in Afghanistan, as President Hamid Karzai pledged his bloodied state would no longer be a “burden.” Leaders of more than 50 nations stood in solemn silence as a bugler’s lament recalled the heavy cost of a conflict that has killed over 3,000 coalition soldiers, maimed thousands more and left tens of thousands of Afghans dead. As war weary western publics pine for an exit, the summit was set to endorse a withdrawal strategy and seek firm commitments from alliance states to train and bankroll Afghan forces to ensure a decade of sacrifice is not wasted.”

It will be a rough exit.

“One of the strongest earthquakes to shake northern Italy rattled the region around Bologna early Sunday, a magnitude-6.0 temblor that killed at least four people, toppled buildings and sent residents running into the streets, emergency services and news reports said.”

“Sunday’s quake in northeastern Italy destroyed more than 300,000 wheels of Parmesan and Grana Padano, a similar cheese, with an estimated value of more than 250 million euros, an industry official said.”

“Pakistan blocked the social networking website Twitter for much of Sunday because it refused to remove tweets considered offensive to Islam, said one of the country’s top telecommunications officials. The tweets were promoting a competition on Facebook to post images of Islam’s Prophet Muhammad, said Mohammad Yaseen, chairman of the Pakistan Telecommunication’s Authority. Many Muslims regard depictions of the prophet, even favorable ones, as blasphemous.”

“The launch of the American SpaceX company’s re-supply mission to the International Space Station (ISS) has been delayed by at least three days. The company was forced to abort the flight just as its Falcon rocket was about to leave the pad at Florida’s Cape Canaveral Air Force Station.”

Lol video is pretty funny. Literally counts down to 0 and then it’s like oh nevermind, lol.

“Female and high school athletes may need more time to recover from a concussion than their male or college counterparts, according to a U.S. study that comes amid rising concern about concussions in young athletes. Researchers, whose report appeared in the American Journal of Sports Medicine, found that of 222 young athletes who suffered a concussion, female athletes tended to have more symptoms than males. They also scored lower on tests of “visual memory” – the ability to recall information about something they’d seen.”

“A new study suggests that women who have liposuction to trim their tummies may gain some fat deeper within the abdomen — a type of fat that’s particularly unhealthy.”

“Twitter will honour requests from users who do not want their online behavior tracked, the company said on Thursday, in contrast with Web companies such as Google and Facebook whose business models rely heavily on collecting user data. Twitter said it will officially support “Do Not Track,” a standardized privacy initiative that has been heavily promoted by the U.S. Federal Trade Commission, online privacy advocates and Mozilla, the non-profit developer of the Firefox Web browser.”

“The lawsuit — filed in a San Jose, Calif. federal court — combines more than 20 similar cases from around the United States, according to Bloomberg. The suit’s organizers are accusing Facebook of invading users’ privacy by tracking their movements online, which the site does via “like” buttons embedded on sites across the web.”

“Facebook fever gripped Wall Street on Friday as the massive social network’s IPO was hit the Nasdaq — but after a rollercoaster day, the stock ended the frame close to where it began… More than 420 million Facebook shares traded hands, with about 30 banks taking part in the frenzied trading.”

Go… Facebook! Apparently the IPO launch was a disappointment though? Whatever. Go Mark Zuckerberg:

“Facebook founder and CEO Mark Zuckerberg updated his status to “married” on Saturday. Zuckerberg and 27-year-old Priscilla Chan tied the knot at a small ceremony at his Palo Alto, Calif., home, capping a busy week for the couple. Zuckerberg took his company public in one of the most anticipated stock offerings in Wall Street history Friday. And Chan graduated from medical school at the University of California, San Francisco, on Monday, the same day Zuckerberg turned 28.”

Pretty special week for the pair of them! And sticking with Facebook-related news…

“Fresh off its first day on the Nasdaq, Facebook has acquired another company: Karma. An app for “in-the-moment gifting,” Karma lets you send everything from a bottle of wine to a fuzzy teddy bear to friends via SMS, email, and Facebook.”

Hadn’t even heard of it before, interesting!

“Pinterest users not only buy the products they pin, but spend more on average than their Facebook counterparts, according to new data from Shopify.”

“US Scientists have discovered fossilised bones that represent a new species of raptor dinosaur that was about the size of a coyote, officials revealed. The raptor was among several discovered near Utah’s Arches National Park, which has yielded several new species in the past two decades.”

“The elevator that sinks into the Vale Creighton Mine near Sudbury, Ontario, is a gateway to two different worlds. One is Canada’s largest nickel mine, opened at the turn of the last century and still in operation. The other is SNOLAB, a large underground particle physics laboratory, the grand opening of which will take place today… SNOLAB, which currently houses eight dark matter and neutrino experiments, is one of about a handful of underground particle physics laboratories in the world. It is the only one that serves as a giant cleanroom.”

“Despite organized anti-bottled-water campaigns across the country and a noisy debate about bottled water’s impact, Americans are buying more than ever.”

“So long to the greatest stunt man who ever lived, bar none. At the Cannes, Jackie Chan announced his retirement from the action film world. At age 58, he said that he feels “really tired” after decades of putting his body through some of the most dangerous, gruelling stunts ever conceived.”

I love Jackie Chan movies/stunts!! Thanks for the years of entertainment Jackie!

“These incredibly detailed infographics by Jer Thorp do the knock-off series of superhero scraps almost too much justice, as they meticulously and elegantly plot the appearance of every one of the 132 Avengers through almost 50 years of issues, with each hero designated by a three-color shield borrowed from Captain America.”

It’s quite the infographic! Not that clear though, could have been laid out differently I think.

“A young Georgia woman fighting a flesh-eating bacteria has learned she will lose her hands and remaining foot, and responded by saying, “Let’s do this.””

“A Japanese woman recently broke the world record for being the world’s oldest woman to climb Mount Everest. This is not her first record-breaker, she had set the record on a previous climb in 2002. According to Reuters, Tamae Watanabe, 73, made the ascent up the 8,850 meter (29,035 feet) Mount Everest, along with a Japanese partner and three Nepali Sherpa guides. This successful climb beat her earlier record she’d set 10 years ago, at age 63.”

I am utterly impressed. 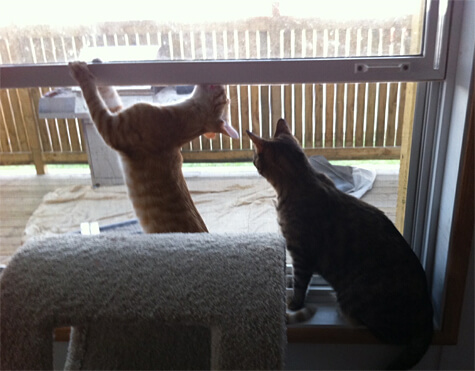 Linda Hoang is a Canadian blogger based in Edmonton, Alberta, who writes about travel, food lifestyle and pet topics. She's also a seasoned social media/digital strategist with a journalism background. Linda loves exploring the world with her husband Mike, eating their way through cities, supporting local businesses, and photographing Instagrammable Walls. She is the founder of the Edmonton International Cat Festival and a fur-mom to two cats and two dogs.
PrevPreviousPhoto of the Day: Saturday, May 19, 2012
NextPhoto of the Day: Sunday, May 20, 2012Next