“A series of tornadoes that cut a swath of death and destruction across at least 10 states left stunned residents digging through rubble Saturday, looking for survivors and bodies. The death toll stood at 32 early Saturday, including 14 each in Kentucky and Indiana, three in Ohio and one in Alabama. Tornadoes also were reported in Mississippi, Tennessee, Illinois, Georgia, North Carolina, and Virginia.”

Devastating. Why do people live in Tornado Alley?

“Poland’s government insisted Sunday that rail travel is safe in the country despite a train collision that killed 16 people, assurances that come months before masses of sports fans will enter the country for a major soccer tournament – many of whom will crisscross the nation by train.”

VIA Rail last weekend, now this. I’ve never travelled on a train myself but these stories sure aren’t helping, lol.

“Vladimir Putin swept Sunday’s presidential election to return to the Kremlin and extend his hold over Russia for six more years, incomplete returns showed… Accounts by independent observers of extensive vote-rigging, however, looked set to strengthen the resolve of opposition forces whose unprecedented protests in recent months have posed the first serious challenge to Putin’s heavy-handed rule. Another huge demonstration was set for Monday evening in central Moscow.”

I mean when tens of thousands of people are protesting against this guy almost every weekend for months leading up to this ‘election’ – you have to think something’s wrong.

“Canadians recently flooded Elections Canada with more than 31,000 reports about robocalls and misleading phone calls placed during the last federal election, prompting the agency to publicly confirm on Friday that it is investigating.”

“Having had time to reflect, search for answers and determine the best course of action for our family, we have made the decision to euthanize our family pet,” reads the statement which was issued through the RCMP.”

This makes me very sad. If there are families willing to adopt the dog they should have let them adopt the dog…

“The City is considering a new bylaw that would ban smoking within 10 meters of any outdoor playground, skating rink, sports field or spray park. The proposal which will go before a city committee on Monday, was first raised by local elementary students last spring. The issue is already stirring up debate, with some doubting whether legislating such a law is necessary.”

As much as I hate smoking and being around smoke, this bylaw might be a bit much. Although it is better for smokers’ health if they don’t smoke as much so if this will help with that then woot woot!

“Chronic diseases are increasingly putting Canadians’ health at risk and adding greater financial burden to the country’s health-care system… ‘Canada is facing a growing burden from such chronic diseases as diabetes and cancer. This burden is expected to increase due to an aging population and rising rates of obesity.'”

“Eating chocolate is not only a treat for the tongue — it may also have some tangible benefits for heart health, such as lowering blood pressure slightly… The study also found that participants had small improvements in blood vessel function and a dip in their insulin levels.”

Good news for chocolate lovers! Now someone tell me chips are healthy.

“Whatever the reason, Canadians are spending more time online than any other country, including highly wired societies such as China, South Korea and the United States. The average Canadian spends about 45 hours a month browsing the Internet… Their voracious appetite for all things Internet has huge implications for advertisers and media companies, with digital advertising spending targeted toward Canadians surpassing $2.5-billion last year. This year, companies are scrambling to measure the effect of all that spending.”

Internet guzzlers we are.

“She browsed Pinterest’s Terms of Use section. In it she found Pinterest’s members are solely responsible for what they pin and repin. They must have explicit permission from the owner to post everything… If that didn’t scare Kirsten enough, the all caps section of Pinterest’s Terms of Use did. Pinterest writes: “YOU ACKNOWLEDGE AND AGREE THAT, TO THE MAXIMUM EXTENT PERMITTED BY LAW, THE ENTIRE RISK ARISING OUT OF YOUR ACCESS TO AND USE OF THE SITE, APPLICATION, SERVICES AND SITE CONTENT REMAINS WITH YOU.” What’s more, Pinterest places all blame and potential legal fees on its users.”

I haven’t pinned anything in over a week. Slightly worried (as are many) about all of these Pinterest copyright issues… Yeesh.

“Twitter users are about to become major marketing fodder, as two research companies get set to release information to clients who will pay for the privilege of mining the data. Boulder, Colorado-based Gnip Inc. and DataSift Inc., based in the U.K. and San Francisco, are licensed by Twitter to analyze archived tweets and basic information about users, like geographic location. DataSift announced this week that it will release Twitter data in packages that will encompass the last two years of activity for its customers to mine, while Gnip can go back only 30 days.”

Well it is all public information, technically. Can’t be too upset about that? Meanwhile:

“The handover ends a bitter battle between Boston law enforcement and the American Civil Liberties Union (ACLU) over whether the information should have been shared for the investigation. Law enforcement officials have argued that the data Twitter could provide–namely, IP address information associated with the account–is an integral component in their ongoing investigation. The ACLU, however, told the Globe that sharing the information is a violation of the user’s First Amendment rights.”

“The company surveyed 1,641 people last December and found that, for a lot of them, mealtime is the best time to check up on Facebook, Twitter, and whatever other social media sites they might use.”

Count me among that statistic! (Gotta tweet photos of my food lol)

“Vancouver began its paperless City Council test in January. After two months, the transition to iPads has brought about a 40 percent reduction in the amount of pages printed for meetings.”

“Could Anonymous be the next al-Qaeda? FBI Director Robert Mueller warned a group of cybersecurity experts on Thursday that online attacks will replace terrorism as the most serious threat facing the U.S.”

Yeah I can see that. Meanwhile:

“Acidity in the Earth’s oceans is increasing more rapidly than any time in the last 300 million years, leading to severe consequences for marine ecosystems.”

Of course, mankind ruins everything it touches, lol. #bitter #endoftheworldiscoming

“British scientists have developed a system to help protect navigation and communications satellites from potentially devastating solar storms, they said on Friday. Services spanning everything from mobile phones to sophisticated weaponry increasingly depend on global positioning system, or GPS, technology. However damage by a massive burst of solar energy could knock out GPS satellites and send them veering into the paths of other craft or scramble their communications.”

That’s good! Otherwise we would be quite helpless.

“Scientists are predicting that the asteroid 2012 DA14 has a good chance of colliding with Earth in eleven months. Watch the skies in February 2013!”

It could break into tiny pieces or it could make a huge impact. We’ll have to see what happens!

“A Lamont couple celebrated a huge milestone on Saturday – one that only two other Canadian couples have ever reached: their 80th anniversary. The big day, which even had the Queen and Governor General sending their congratulations, was commemorated by five generations of family, all in one room.”

So, so cute. Mike and I will reach that milestone I’m telling you right now!! ;)

“A 25 year-old who wasn’t supposed to live past his teenage years is getting ready to defy the odds once again. This time, Adam Biel plans to set a world record by cycling from the southern tip of Argentina to the northern tip of Alaska – and he plans to complete the 22,700 kilometre journey in just 100 days.”

Amazing. People are doing really cool things in the world.

“Planned Parenthood of the Great Northwest (PPGNW) distributed more than 50,000 condoms in QR code-emblazoned wrappers to college students in the state of Washington. The wrappers enable people to scan the QR code with their smartphone to check in to the site wheredidyouwearit.com and anonymously let the world know where they practiced safe sex. Users can also check in to the site by computer.”

“Times are looking tough for Tokyo’s cat cafes, where feline aficionados can drop in for tea and some time with a cat. At most such establishments, it’s the post-work rush that brings in the most cash, with tired and harried professionals dropping by on their way homes to pet and play with the animals as a way of relieving stress. But now the purrs of delight may be getting quieter. A revision to Japan’s Animal Protection Law, due to come into force on June 1, will slap a curfew on the public display of cats and dogs, forcing cat cafes to shut up shop at 8 p.m.”

Lol! So funny. I didn’t even realize Japan had “cat cafes”!! Hehe.

Lol. You got to admit he maintains his composure quite well! 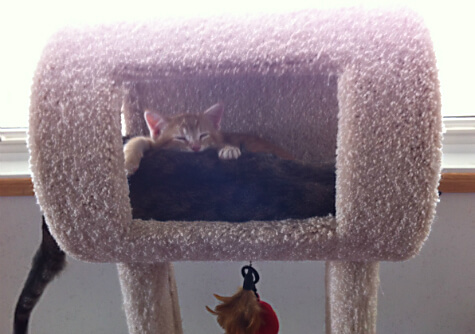 Linda Hoang is a Canadian blogger based in Edmonton, Alberta, who writes about travel, food lifestyle and pet topics. She's also a seasoned social media/digital strategist with a journalism background. Linda loves exploring the world with her husband Mike, eating their way through cities, supporting local businesses, and photographing Instagrammable Walls. She is the founder of the Edmonton International Cat Festival and a fur-mom to two cats and two dogs.
PrevPreviousClicks of the Day: Tuesday, Feb. 29, 2012 Edition!
NextFeature Story: Edmonton Dishcrawl brings growing foodie community together for a night of new experiencesNext