“Residents in the area where thousands of barrels of oil leaked near Sundre days ago are questioning whether the devastation can be reversed, as crews work to clean up the spill. Alberta Environment said the spill has been contained. But the man who discovered the spill tells CTV News the damage has been done… ‘It’s complete and sheer devastation. There are not words to describe this. I just don’t understand how it can happen with today’s technology.'”

“It was a historic kick off to Edmonton Pride Week. Edmontonians lined the streets downtown, chanting and cheering as they watched the Pride Parade make its way down 102 Avenue from 108 Street to 99 Street. Politicians, businesses and church groups took part in the party that turned downtown into a rainbow of colours. Thousands then packed Churchill Square to continue celebrations and hear greetings from a special guest. For the first time in Alberta’s history, the province’s leader took part in Pride.”

“Relatives of Ronald Hale aren’t blaming the hospital workers who contaminated his surgery with a bacteria that later killed him. However, they say they don’t understand how the super-bug could have gotten by strict hospital protocol.”

“More than half of Canadian provinces have now sued big tobacco companies in an attempt to recoup health costs, with the Quebec government announcing a $60 billion lawsuit Friday. Six provinces have filed similar lawsuits — British Columbia, Ontario, New Brunswick, Newfoundland, Manitoba and now Quebec — while the others have announced plans to do the same… The lawsuits from provinces are separate from historic class-action lawsuits being launched by smokers and former smokers in Quebec.”

“Whether you’re looking for farm-fresh veggies or one-of-a-kind clothing, Edmonton’s summer markets have it covered. There are more than 15 outdoor markets open this year, some very intimate with around 20 stalls and others boasting more than 250.”

I can never go to these things because they always appear to be on weekends or during the day (which, in most cases I am working). So I am very pleased the new 124th Street market is on Thursday nights and also a new Windermere one opening will be at night too!

“An Edmonton woman is among many saying thank you to a non-profit organization she says changed her life. Trina Bartel had left an abusive relationship and was trying to get back on her feet when she heard about Suit Yourself, an organization that provides business attire to women in need. Bartel joined hundreds of women who came out to support the organization and celebrate its clients successes on Sunday.”

“Authorities found the mutilated remains of 14 people inside a truck parked in front of a city government office in northern Mexico Thursday, according to the Attorney General of the State of Tamaulipas. The bodies were found in the town of El Mante, Tamaulipas.”

Just really not a good time to be in Mexico…

“The new leader of the main Syrian opposition umbrella group urged world powers on Sunday to protect civilians from President Bashar al-Assad’s crackdown and take decisive action at the United Nations that could be implemented by force.”

“The Spanish prime minister on Sunday called his country’s banking rescue by Europe a victory for the euro zone but hastened to describe it as a deal that was drawn up on his country’s own terms.”

So many economic troubles.

“The Centers for Disease Control and Prevention (CDC) reported on Thursday that 11 baby boys in New York City were infected with herpes between Nov. 2000 and Dec. 2011 following an ultra-Orthodox Jewish circumcision ritual called metzitzah b’peh — or oral suction — in which the mohel puts his mouth directly on the newborn’s circumcised penis and sucks away the blood. Ten of the babies were hospitalized, at least two developed brain damage and two died, according to the New York City health department.”

“A brain training technique which helps people control activity in a specific part of the brain could help treat depression, a study suggests… The researchers said they believed the MRI scans allowed participants to work out, through trial and error, which sort of positive emotional imagery was most effective. The technique – known as neurofeedback – has already had some success in helping people with Parkinson’s disease.”

“An “early and aggressive” approach to people on the cusp of developing Type 2 diabetes is justified to reduce cases of the disease, a study suggests. People with “pre-diabetes” have higher than normal blood sugar which has not yet reached diabetic levels… Some measures, such as weight loss and more exercise, can reverse pre-diabetes.”

“Genetics may be the best predictor of longevity, but lifestyle choices, including staying connected with family and friends, are key components to reaching the age of 100, according to a new poll released on Wednesday.”

“The new app center, the company’s first big announcement since its IPO, went live with more than 600 apps, including Nike+ GPS, Ubisoft Ghost Recon Commander, Stitcher Radio, Draw Something, and Pinterest… The App Center is designed to offer an experience personalized for each user, with app recommendations based on the apps they and their friends use.”

I don’t think this is available for Canadian users yet.

Wow… that’s a lot of income.

“Two screens are better than one: There was lots of talk about the so-called second-screen experience, in which a handheld screen works in tandem with what’s happening on the living room TV… Tough ladies: Sisters were doin’ it for themselves at this year’s E3, with a pleasing roster of upcoming games featuring strong and often realistic (well, for video games) heroines.. There were no significant new technology announcements.”

Seems uneventful, but would still be fun to attend someday. :)

“Toronto’s Pearson International Airport is one of three airports to be outfitted with thousands of iPads by restaurant company OTG Management. The company says it will install 2,500 Apple tablets at the Toronto airport over the next 18 months… The company says they can be used to order meals, to access the web and social networks, or launch apps and games.”

Way of the future.

“The United Nations is considering a new Internet tax targeting the largest Web content providers, including Google, Facebook, Apple, and Netflix, that could cripple their ability to reach users in developing nations. The European proposal, offered for debate at a December meeting of a U.N. agency called the International Telecommunication Union, would amend an existing telecommunications treaty by imposing heavy costs on popular Web sites and their network providers for the privilege of serving non-U.S. users, according to newly leaked documents.”

“Millions of young adults are forgoing necessary care and treatment because of rising health care costs, a report said Friday. In fact, 41% of young adults between age 19 and 29 failed to get medical care in a recent 12-month period because of cost, according to a Commonwealth Fund survey. Among uninsured adults, the number rose to 60%. They are not filling prescriptions, skipping recommended tests or treatments, avoiding doctor visits and failing to get specialist care they need.”

“A Dutch company plans to send four people to Mars by 2023. Mars One, the company behind the initiative, has earned the endorsement of a Nobel prize winning physicist, Gerard ‘t Hooft, who says the plan is possible. There’s just one catch. The team won’t come back. Instead, Mars One participants will create settlement on the red planet, where their lives will be recorded as part of a bizarre, lifelong media stunt.”

“Accounts of unusual sexual activities among penguins, observed a century ago by a member of Captain Scott’s polar team, are finally being made public… Details, including “sexual coercion”, recorded by Dr George Murray Levick were considered so shocking that they were removed from official accounts… He was shocked by what he described as the “depraved” sexual acts of “hooligan” males who were mating with dead females.”

“Scientists are embarking on a mission to capture a 3D image of every ant species known to science. The US team is visiting museums around the world to photograph all of the ant specimens in their collections. They are using a technique that, for the first time, allows microscopic anatomical detail of the insects’ bodies to be photographed. The aim is to make an online catalogue called Antweb, providing a unique tool for scientists who study the insects.”

I guess start small, move up.

“Jurassic Park fans of all ages are in for a bit of a shock: experts from Manchester University have found that dinosaurs, usually portrayed as enormous, earth-shaking monsters, might have been much lighter than previously thought. But this is merely the latest in a long history of palaeontologists admitting that there is a speculative element to their field… We are still in the dark when it comes to some aspects of dinosaur life: how exactly did they die out? Why did some of them prosper while others were short-lived? What were the functions of bizarre features, like stegosaurus’s “sail”. And which factors led to their runaway evolutionary success? For now, there are still plenty of things we know nothing about – and scientists shouldn’t be afraid to say so.”

So much still to be discovered on these fascinating creatures.

“Bibi and Poldi’s relationship makes most human marriages look like mere flings. The 115-year-old Giant Tortoises have been together since they were young, eventually growing up to become a bonded pair. But now the century-spanning relationship is coming to an end since Bibi decided she couldn’t stand the sight of Poldi any longer.”

This is utterly adorable. Heart melting.

LOL! What a mean chick. 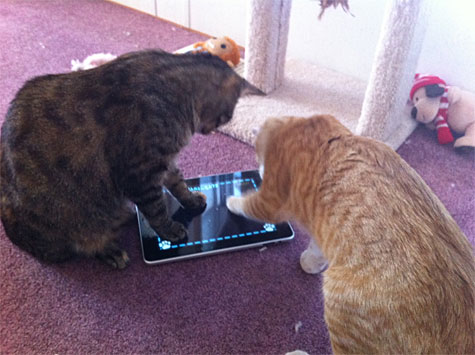 The kitties playing cat games on the iPad. :)

Linda Hoang is a Canadian blogger based in Edmonton, Alberta, who writes about travel, food, lifestyle and pet topics. She's also a seasoned social media/digital strategist with a journalism background, the founder of the Edmonton International Cat Festival and co-founder of Stop Race Based Hate, an online anti-racism education tool. Linda loves exploring the world with her partner Mike, eating their way through cities, supporting local businesses, and photographing Instagrammable Walls. Linda is a fur-mom to two cats and two dogs.
PrevPreviousPhoto of the Day: Sunday, June 10, 2012
NextPhoto of the Day: Monday, June 11, 2012Next