This kind of sucks because it won’t be visible from North America unfortunately, but well, still cool for other people I suppose.

If this starts applying to online shopping it would totally revolutionize the industry! Lol.

Seems like everyone is striking lately! I hate Air Canada and always try to fly with other airlines, so this won’t likely affect me either way.

HOW CUTE. I would purchase this cook book and/or be happy to receive it as a gift!

Infographic of the day! A look at what actually goes on behind UPS each day!

So excited for iMessage!

This is hilarious! Gotta love satire.

I don’t have too many online regrets! Thanks to Mike, he always asks me ‘Are you sure you want to post that?’ before I post anything that I would eventually regret.

“That’s one small step for man, one giant leap for Apple fanboys (AND GIRLS!) everywhere.”

I don’t watch 60 Minutes at all (growing up I always thought the ominous ticking clock was scary, lol) – but wow, other people sure do!

80% of all Internet engagement would involve clicking, I’d say, lol.

“Obviously, Martians would be delighted with the new arrangement.” lol.

I’ve only shopped there once but, yay!

Well that’s unfortunate it’s not enough to be dangerous – and even if it was I don’t think people would ever stop eating chicken, lol.

Looking forward to it!

Sucky but, we’ll get it EVENTUALLY.

The place Mike & I were at for a year was pretty reasonably priced! Happy we aren’t renting anymore though.

It’s a lot more simple. Not sure if I like it! I like seeing little images of what falls under what categories.

Lol. Apparently that cop was having a slow day.

Sad but probably true for Canadian families too..

This dress would not make me stop eating meat, lol.

Of course 4 cities in Japan make the Top 10, lol. #FulfillingthatExpensiveStereotype

Sidenote: I have mushroom shaped salt and pepper shakers, hehe.

Lol, throw away everything I guess.

I would be too scared to fly in a solar-powered plane, lol.

Good to know… I actually hadn’t heard of any of these except for Lonely Girl. The bizarre creatures are still fascinating despite their fakery, lol.

Yay! I LOVE cauliflower and broccoli! :)

Are you guilty of misusing any of these?

I’ve had a job in the food industry since I was a child, thanks to my parent’s restaurant! The last 4 years my summers have been spent juggling restaurant on the weekends and media-related internships/jobs.

This has to be fake but still, LOL. 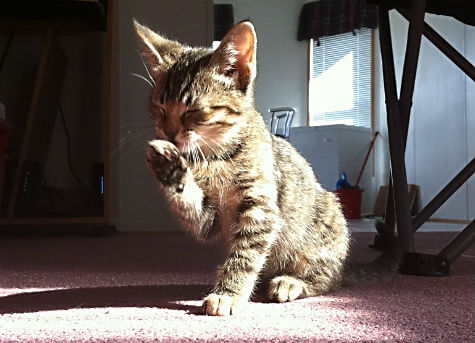 Linda Hoang is a Canadian blogger based in Edmonton, Alberta, who writes about travel, food lifestyle and pet topics. She's also a seasoned social media/digital strategist with a journalism background. Linda loves exploring the world with her husband Mike, eating their way through cities, supporting local businesses, and photographing Instagrammable Walls. She is the founder of the Edmonton International Cat Festival and a fur-mom to two cats and two dogs.
PrevPreviousClicks of the Day: Wednesday, June 8, 2011 Edition!
NextClicks of the Day: Monday, June 13, 2011 Edition!Next