“The votes are in and a familiar name has been chosen to replace Capital EX. Northlands announced Sunday the city’s summer fair will be re-branded to K-Days for 2013 and beyond. K-Days received 38,762 of 51,160 total votes cast in the Name Your Fair contest.”

Wasn’t even a close race. I honestly don’t care what the fair is called as long as there’s a fair to go to in the summer but there are some pretty mixed feelings about K-Days being chosen (that I’ve seen on the Interwebz)…

“‘This is our 13th year – so every year we look for a different design and we were kind of having some trouble thinking of something new,’ Rachel Kraay said from the Lacombe-area farm. Inspiration came from a quiet moment for Kraay. ‘I was just relaxing, reading a magazine and saw a whole bunch of QR codes and I thought, you know, it looked a whole lot like a maze I wonder if we can make one.’ It isn’t just an interesting image; the code is poised to smash a world record.”

“An investigation is underway after an Enbridge pipeline leaked crude oil into a field in Wisconsin. Officials say the pipeline was shut down within minutes of the leak, which spilled about 1,200 barrels of oil near Grand Marsh, Wisconsin on Friday.”

“There is a “growing radicalized environmentalist faction” in Canada that is opposed to the country’s energy sector policies, warns a newly declassified intelligence report. The RCMP criminal intelligence assessment, focusing on Canadian waters, cites potential dangers from environmental activists to offshore oil platforms and hazardous marine shipments, representing perhaps the starkest assessment of such threats by the Canadian security community to date.”

“A Congressional investigation has uncovered “horrifying” details about a US-funded military hospital in Afghanistan in which patients were kept in what was described as “Auschwitz-like” conditions. A US House subcommittee heard shocking testimony of conditions at the Dawood Miltiary Hospital in Afghanistan. According to Buzzfeed, the allegations include bribery and surgery without anesthesia. Top retired US military officials also made the grave allegation that there was an attempt to block the investigation into conditions at the hospital.”

“The former graduate student accused in the deadly Colorado movie theatre shooting was being treated by a psychiatrist at the university where he studied, the first indication that he may have sought help before the rampage that killed 12 people and wounded 58. Attorneys for James Holmes, 24, made the disclosure in a court motion Friday as they sought to discover the source of leaks to some media outlets that he sent the psychiatrist a package containing a notebook with descriptions of an attack.”

“A couple in Jackson, Mississippi were forced to relocate churches the day before their wedding after the pastor notified them that some church members were uncomfortable having a black couple married there. The First Baptist Church of Crystal Springs, which is predominantly white, does not expressly forbid people of color. Pastor Stan Weatherford said he was surprised by the reaction but felt that it was important to pass the message along to Charles and Te’Andrea Wilson.”

“Shift work has long been associated with unhealthy lifestyles and sleep deprivation, but a new study has now linked irregular work hours to more serious problems — increased risks of heart attacks and strokes. A team of international researchers, including Canadian doctors and professors, analysed 34 studies involving more than two million people and found that shift work increases the risk of a heart attack by 25 per cent and stroke by 5 per cent.”

“A new study published on Sunday inNature Genetics details the discovery of a new gene responsible for a different manifestation of Turner’s childhood blindness. It’s the 18th gene mutation to be identified as a cause for the rare eye disease, and is called the NMNAT1 gene… Koenekoop said the discovery also represents a breakthrough in research on neurodegenerative diseases, such as Alzheimer’s and Parkinson’s diseases. The NMNAT1 gene identified in his study has also been found in the slow Wallerian degeneration protein’s cellular activities in research from the nineties. That protein has been shown to slow down neuronal degeneration in mice models… “It’s probably the most important gene discovery in the last 15 years in neuroscience, and certainly most exciting in blindness because there’s an immediate treatment avenue,” he said.”

“Sitting in front of a computer or TV screen late into the night or leaving it on when you fall asleep could increase your chances of becoming depressed, according to a study by U.S. scientists.”

“With the three-martini lunch gone the way of the typewriter, office workers are free to discover the healthier perks of midday movement. An active lunchtime can range from the sweaty to the serene, experts say, from a full-out cardio blast to a walk in the park. “People who want to get in a good workout over lunch hour can do simple things like go for a walk,” said Dr. Cedric Bryant, chief science officer of the American Council on Exercise. “Think about it. Thirty minutes on a regular basis would meet the minimum threshold for physical activity,” he added.”

But what about eating during my lunch break? Lol.

“Dr. Jean Lorenceau of the Universite Pierre et Marie Curie-Paris has developed a medical device that translates eye movement into cursive handwriting. The gadget was previously not possible because the human eye responds instinctively to surroundings and makes lots of involuntary movements. People actually do not have much control over the organ. Lorenceau found that an optical illusion called reverse phi motion allowed him to create a tracking system for the voluntary smooth eye movements.”

“Apple isn’t currently in talks with Twitter to invest in the social-networking site, but according to a report from The New York Times, the two companies were previously in such discussions that would value Twitter at more than $10 billion.”

“Twitter has revealed that the opening ceremony of the 2012 London Olympic Games generated more than 9.66 million tweets, as the first day of the event went on to rack up more tweets than the entire 2008 Olympics in Beijing.”

That’s a lot of tweets!

“NBC is being roasted worldwide for its coverage of the Olympics, to which they’re showing critics their peacock butt. The American network is tape-delaying events to get them into lucrative prime-time viewing at night. Viewers, therefore, must try to keep themselves in the dark for hours to avoid knowing who’s won the events they might like to watch. On Saturday, NBC didn’t telecast the much-hyped Michael Phelps-Ryan Lochte 400 IM swim showdown as it happened, but still divulged results to viewers of its Nightly News hours earlier. NBC trumpets that its tape-delayed London opening ceremony was its most-watched summer Games opening ever, so presumably that’s all that counts, right?”

“A totally bizarre creature has been washed up on the shore of New York’s, East River. There are plenty of bloggers, social networking site users and Internet forum’s that are buzzing with the news. People want to know what this strange creature is and they are not prepared to believe that it is simply a pig.”

Definitely makes me think of the Montauk Monster! Interesting.

“Three minutes of some of the best Ralph Wiggum lines from earlier seasons of The Simpsons.”

Ralph one-liners are my favourite!!

“They’re back for a second round.”

“Two kittens duke it out on a bed while mom watches on approvingly.” 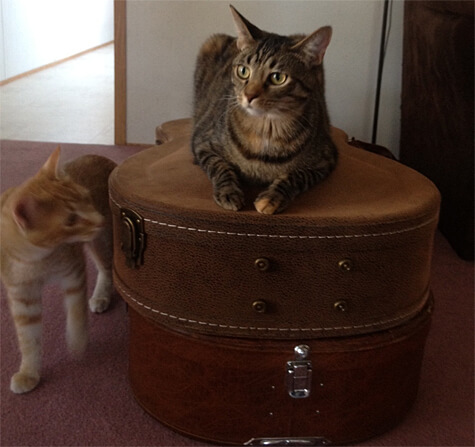 Linda Hoang is a Canadian blogger based in Edmonton, Alberta, who writes about travel, food, lifestyle and pet topics. She's also a seasoned social media/digital strategist with a journalism background, the founder of the Edmonton International Cat Festival and co-founder of Stop Race Based Hate, an online anti-racism education tool. Linda loves exploring the world with her partner Mike, eating their way through cities, supporting local businesses, and photographing Instagrammable Walls. Linda is a fur-mom to two cats and two dogs.
PrevPreviousSocial Media Column: Bite your tongue on Twitter, Facebook
NextClicks of the Day: Monday, July 30, 2012 Edition!Next