Happy birthday Disneyland!! Nice photos of the opening of the happiest place on Earth ;)

LOL when they show the split screen with her face!!! :O

This is such a crazy story! #MonkeyLove

This is very cool. I was very amazed when I saw the video of it!

Back and forth with this issue. If it does, it’s too late for us all anyway so let’s just deal with it, lol.

Lol. Makes me think of the GIGANTIC poster ad at NAIT two years ago for Finning. The biggest, boldest font was supposed to say “OPPORTUNITIES” but it said “OPPORUNITIES” lol. I took a photo and tweeted, what’s an opporunity. #CredibilityFail

Doesn’t RIM get it? They cannot compete with Apple.

Neil Patrick Harris deserves all of the praise he gets! Wonderful actor… magician… man :)

Not a pretty sight but the fact that it still functions is extremely impressive. Also:

“With the smartphone app, you can wave your phone through the air to see layers of historical photos superimposed upon wherever you happen to be.” How cool!

A very interesting read. (Well, for people who getting married, are married and want to see if those “truths” were true for them, and for people like me, who is a romantic and would like to marry young so I always enjoy reading wedding-themed articles, lol).

Great details! I was planning on re-reading the entire series but then I remembered… Pottermore! So I’ll read it online once this website officially launches.

Haha! Awesome. All you have to do is ask… and post things to YouTube, and you shall receive!

Good lord. At what point are they going to realize probably everything there has been contaminated and probably children being born in the coming months… years… will also have radiation in them? #SAD.

UM. This is extremely suspicious. Even though police say it’s not. #SKETCHY

Well that kind of explains the obesity numbers, lol.

Yay!! I love Chrono Trigger. So. Friggen. Much.

“Getting away from it all” has morphed into “taking it all with you. (People are) glued to smartphone, tablets, and computers to keep up with Facebook, Twitter, and other social media and news sites.” True or false for you? True for me… lol.

First of all, wow will this Murdoch/News of the World stuff continue to get this crazy/juicy?! And secondly, I thought LulzSec had stopped its hacks? I knew they had to have been joking when they said they were retiring.

Weird but I guess makes sense/is romantic for them, lol.

If yes, I do not see it succeeding.

Always be aware of all transactions going in and out of your debit/credit/accounts, everyone. 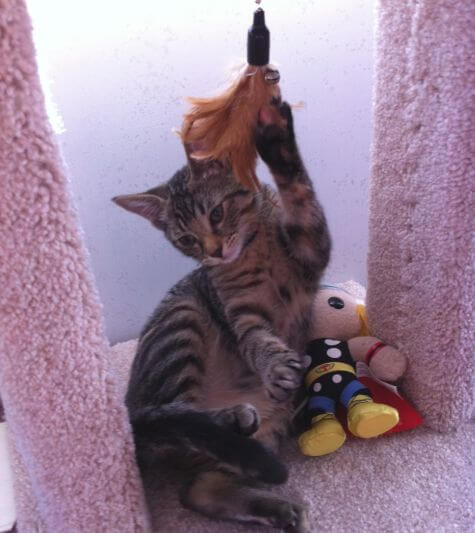 My poor Thor. I saw her quietly sitting like this with her little feather toy so I took a picture because I thought she was being funny but then she started squirming and squealing — her paw was stuck to the little bell!!! I had to help her get her nail out of the stupid bell and then I ripped the bell off of the feather. Imagine if she had gotten caught while no one was home? :( What a sad thought.

Linda Hoang is a Canadian blogger based in Edmonton, Alberta, who writes about travel, food, lifestyle and pet topics. She's also a seasoned social media/digital strategist with a journalism background, the founder of the Edmonton International Cat Festival and co-founder of Stop Race Based Hate, an online anti-racism education tool. Linda loves exploring the world with her partner Mike, eating their way through cities, supporting local businesses, and photographing Instagrammable Walls. Linda is a fur-mom to two cats and two dogs.
PrevPreviousRecap: Filling in as web producer, July 18, 2011
NextReview: Finish QUANTUM Dishwasher DetergentNext