“The man arrested on Friday in connection to the beating of Canadian Sheila Nabb in Mazatlan, Mexico confessed to media on Saturday, admitting he is responsible for the attack.”

His oh-so-public confession seems way too sketchy to me to be believable. Something else is going on.

“A jury took 15 hours to find three members of an Afghanistan-born Montreal family, Mohammad Shafia, 58, his wife Tooba Yahya, 42, and their son Hamed, 21, each guilty of four counts of first-degree murder.”

Huge story for Montreal except that their Evening News was pre-empted on the day the decision came down, oy. Managed to get a 30 second breaking news update in around the 6 o’clock hour but a whole cast + Shafia pack would have been the preferred option, lol.

“The operation to recover the capsized cruise ship Costa Concordia could take up to 10 months, Italy’s top rescue official has said.”

What an extended eyesore that will be. Hopefully they get all of the fuel out and nothing bad happens to the environment.

“Police in Calgary are once again investigating a potential drug overdose that could be linked to ecstasy… There have been at least half a dozen deaths in Calgary and another five in B.C. linked to a spate of deaths from a toxic chemical being found in ecstasy pills.”

This is so stupid. Can people not be so dumb? Stop taking ecstasy first of all then if you’re going to – stop overdosing! Unbelievable.

“Rogers Communications Inc. is asking an Ontario court to strike down part of a federal law requiring a company to have “adequate and proper” tests of a product’s performance before advertising claims about the product — on the grounds that it violates its freedom of expression.”

“The finding raises questions of whether the five bird flu mutations may also have multiple functions, and could they evolve naturally?”

“Overtime can make your wallet smile, but your insides weep. A new study shows people who work overtime regularly are more than two times as likely to experience a new “major depressive episode” than their counterparts who work a standard work day.”

“Internet scorn for Twitter’s announcement Thursday that it would censor tweets was swift and unforgiving… Like Yahoo and Google before it — and for the same reason, becoming a global powerhouse — Twitter has confronted an inconvenient truth: Freedom of expression is sacrosanct and protected by the Constitution in the United States, but in other parts of the world, not so much. Following the backlash, Twitter on Friday said that it will not filter tweets, but instead will be ‘reactive only, that is we will withhold specific content only when required to do so in response to what we believe to be a valid and applicable legal request.'”

Hm. Not thrilled about it really but what can we do.

“Timeline will tell the story of Facebook users’ whole lives. But only if they choose to share it.”

“Trees shrouded in ghostly cocoons line the edges of a submerged farm field in the Pakistani village of Sindh, where 2010’s massive floods drove millions of spiders an possibly other insects into the trees to spin their webs.”

“Presley and Ethel Bradshaw, a Kentucky couple, had been married for 73 years when they died Monday, hours apart.”

Sooooooooo adorable… I love stories like this. And it’s not the first time I’ve heard of that in the last few months so it appears more loving, long-lasting couples seem to be dying together lately!

“What’s missing for most people in this day-to-day email equation is a helpful and memorable email signature. This precious real estate at the bottom of every message is often filled with either too much or too little information (or, worse, dead space).”

Oo, this gives me great inspiration in snazzying up my own email signature!

“Their tops are made out of rubber, their bottoms are made out of strings, and there are at least 272 of them in Edmonton. Tigger is the top name for cats in our city, according to a Journal analysis of Edmonton’s licensed cat database. Nearly one per cent of the 34,000 felines licensed here carry the moniker inspired by Winnie the Pooh’s bouncy, exuberant pal.”

First of all – LOL what an awesome topic for an article. Secondly – Thor doesn’t get mentioned but there I saw a cat named Thor at PetSmart a few months ago! I’m sure it gained popularity the past couple years because of the new movie, lol.

Oh my god this is sooooooo cuteeeeeeeeee!!!!!! 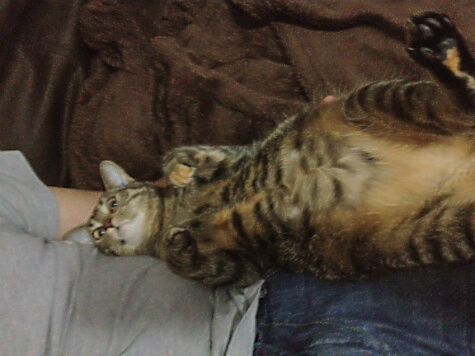 Lol Thor is the funniest cat ever!!

Linda Hoang is a Canadian blogger based in Edmonton, Alberta, who writes about travel, food lifestyle and pet topics. She's also a seasoned social media/digital strategist with a journalism background. Linda loves exploring the world with her husband Mike, eating their way through cities, supporting local businesses, and photographing Instagrammable Walls. She is the founder of the Edmonton International Cat Festival and a fur-mom to two cats and two dogs.
PrevPreviousFeature Story: Edmonton philanthropists add more “awesome” to the world one idea at a time
NextClicks of the Day: Monday, January 30, 2012 Edition!Next