#CavaliaYEG – Tweet Night under the White Big Top at Cavalia!

Tweeting has so many perks!!! :) The biggest one for me to date – being invited under the White Big Top for Cavalia’s ‘Tweet Night’ on Wednesday, Oct. 3!! I was one of 20 “VITs” (Very Important Tweeps! hehehe!) invited to experience Cavalia like no other. Our invitation included free food, free drinks, a backstage stable tour, and UNBELIEVABLE seats! We were also encouraged to take pictures (no flash though!) and tweet whatever we wanted about the show, throughout the show! We even had our own Tweet Night sub-website hosted on Cavalia’s official site! What an experience! 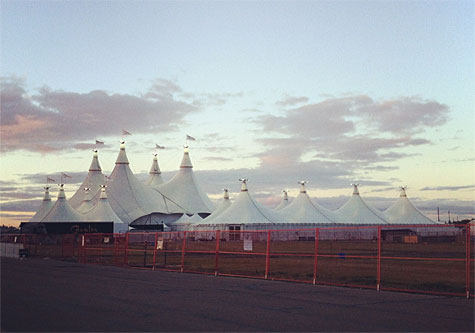 The White Big Top at Cavalia!!

I was going to bring Mike as my guest but then we found out our friend Brandy has been dying to go to Cavalia and is an extreme horse lover – so we thought she’d get more out of the experience than Mike would. :) We arrived at the White Big Top about an hour before showtime. This was advised so we could get the full food and drink experience in the Rendezvous Tent. 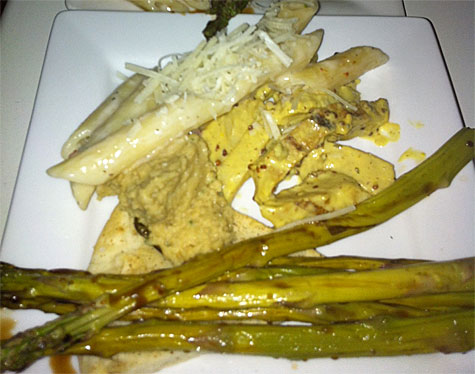 Food under the Rendezvous Tent at Cavalia!

I had a plate of salad and wrap appetizers, two plates of chicken, pasta and asparagus, and one plate of shrimp skewers. :D Delicious! I could have fit in a third plate of chicken, pasta and asparagus honestly – but between waiting in food lineups, checking out the Cavalia merchandise, chatting with a few tweeps and eating – there wasn’t time for another food run! I didn’t have any drinks because it was only doing beer and wine and I’m not a beer and wine person (or really an alcohol person in general, but had there been some hard liquor/mixes I would have probably ordered a couple). Brandy made full use of the open bar though, lol! 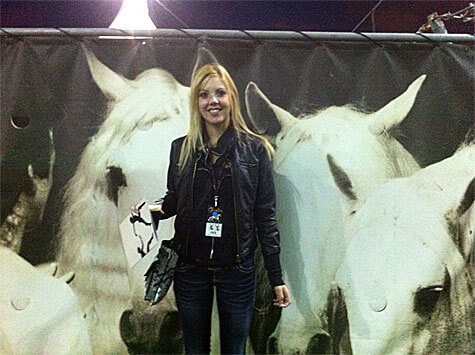 Brandy with the beautiful Cavalia horses backdrop. On our way to the main tent for the show!

Thank you profusely to Cavalia for giving us such incredible seats. We were literally steps away from the performance area (I don’t want to say ‘stage’ because it was more of a sandy area where the horses were galloping and doing their majestic, magical thang). 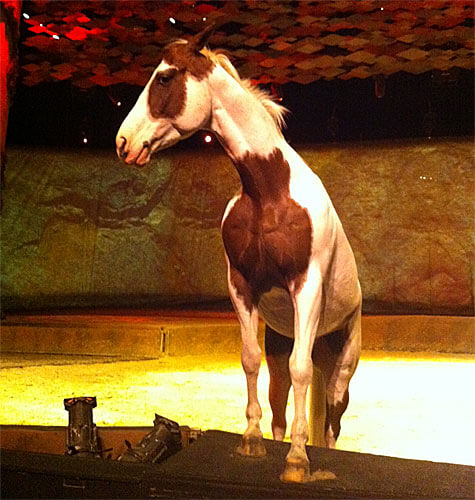 This is how close our seats were!!!! There is no zoom used in that picture!! 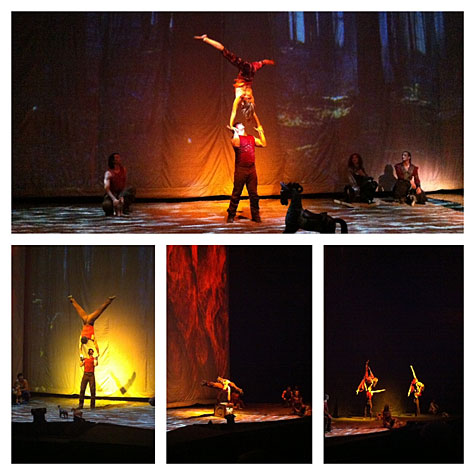 Astounding acrobatics right off the bat! 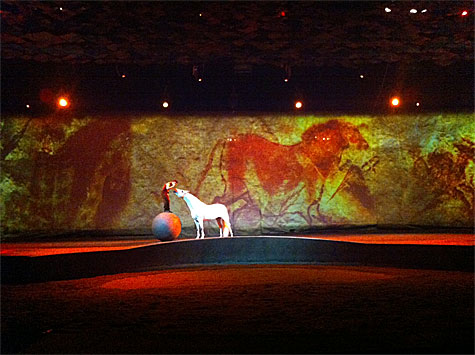 An intimate moment between man and horse at Cavalia.

There are 13 acts in Cavalia and 48 horses perform in those acts. The horses are the stars!! Horse expert Brandy was blown away by what the horses were able to do – saying most of the stunts and movements are very, very difficult to train. There were crazy moments – like when some of the performers were able to not only balance while standing on a horse as it galloped around – but they were also able to flip and do various stunts on and around the horse. 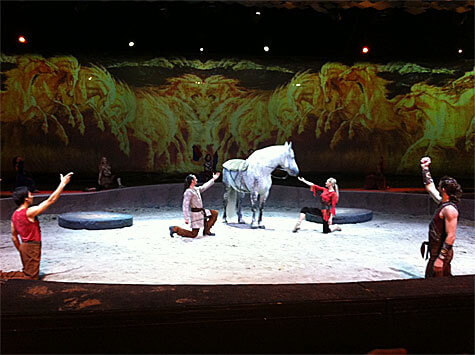 The horses were the STARS! of Cavalia. 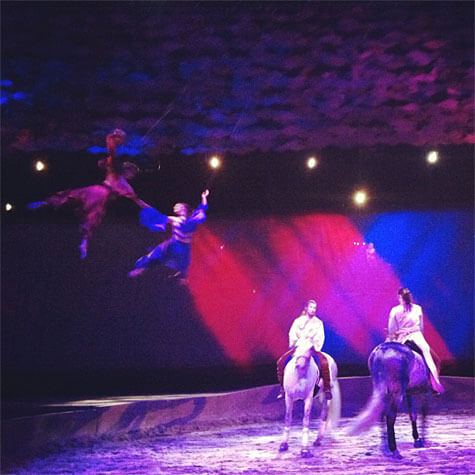 Love this scene from Cavalia.

There were very Cirque du Soleil moments – with acrobats flipping and flying through the air (harnessed). And there were beautiful, intimate moments between horse and man / horse and woman. All of the scenes brought to life even more with the terrific live band and haunting voice of a lone female singer. 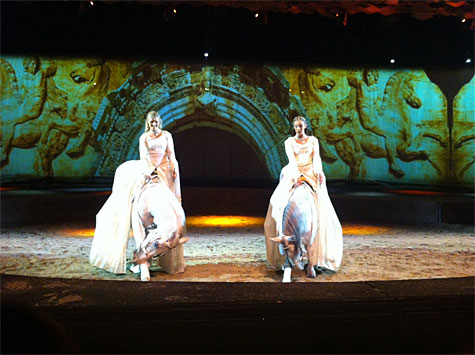 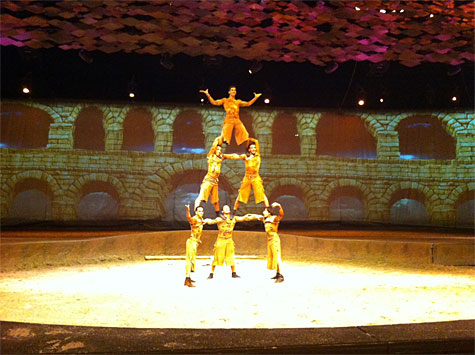 I haven’t posted any of the action-packed scenes because all of my photos for those were literally a blur. Riders jumping over poles and landing effortlessly back onto the horse’s back, horses running left and right. Some scenes the horses were so playful – nipping and biting at their friends. Some scenes the performers were very playful -pulling the audience into their shenangigans. The second-last scene “Voltige En Ligne” was exhilarating. I didn’t know where to look! Acrobats up high, in the back, stunters and trick horses moving left to right. There was even a cameo by a miniature pony! 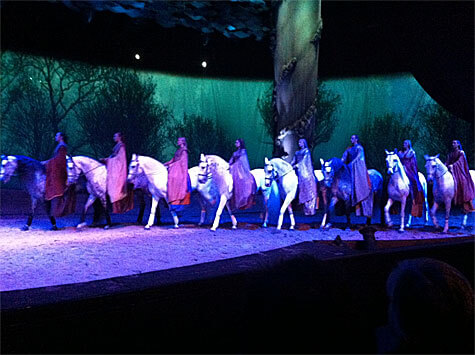 The horses – they dance! 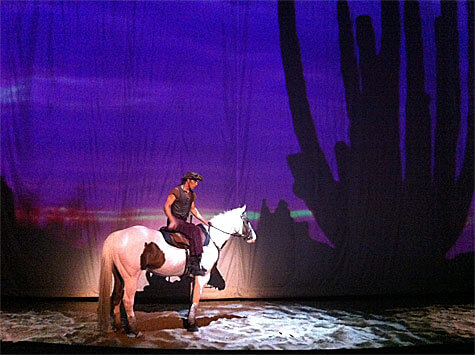 The western scene in Cavalia. Had been wondering if the cowboy hats were going to be coming out in the show!

All in all a beautiful and fun performance with moments that defied gravity and moments that left your jaw hanging a bit. You could tell the horses were just proud to be a part of it and you could tell the performers were proud to work with the horses. Lots of respect seeping out there. A magical show that was well-deserving of a standing ovation. 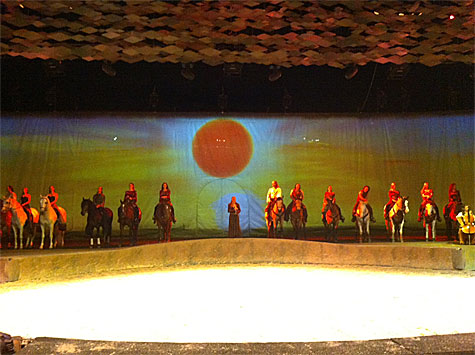 The end. Thank you for a great night Cavalia!

But the night is not over! Onto the backstage stable tour us VITs went! First we got to meet two of the performers and two of the horses in the show – and have our photos taken with them (no flash!) 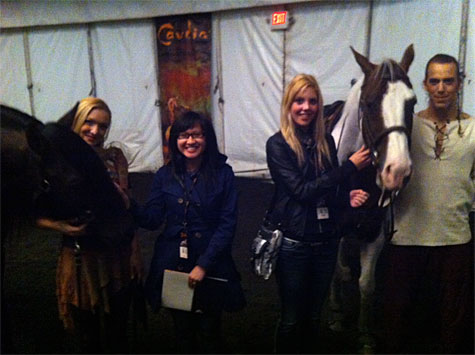 Meeting some of Cavalia’s horses after the show! 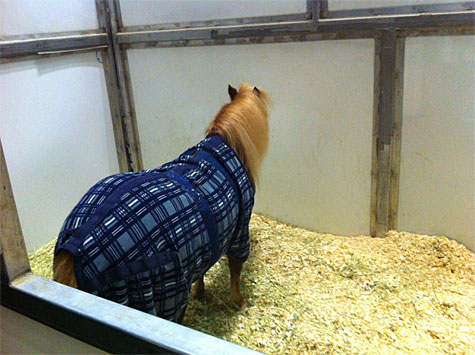 This miniature pony makes a cameo in Cavalia!

So much fun! It was such a memorable night and I’m so happy to have been able to take part with my fellow tweeters! :) 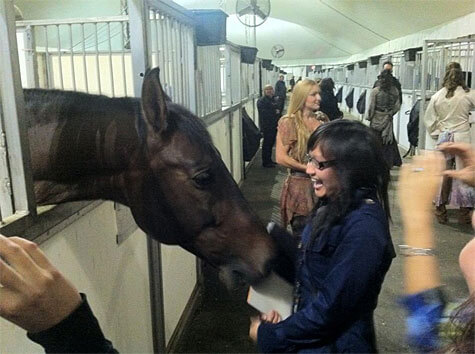 This horse wanted to eat my hand and my iPhone! :) Thanks @Javier_ST for the photo!

So have you been to Cavalia?! What did you think??

Linda Hoang is a Canadian blogger based in Edmonton, Alberta, who writes about travel, food, lifestyle and pet topics. She's also a seasoned social media/digital strategist with a journalism background, the founder of the Edmonton International Cat Festival and co-founder of Stop Race Based Hate, an online anti-racism education tool. Linda loves exploring the world with her partner Mike, eating their way through cities, supporting local businesses, and photographing Instagrammable Walls. Linda is a fur-mom to two cats and two dogs.
PrevPrevious#TweetforHope – Hope Mission Radiothon: We raised enough to feed 2,060 people!
NextSocial Media Column: Social media has its perks!Next