I’m always raving about food in Edmonton. We have incredibly talented chefs in the city and some of the best restaurants (a list that’s constantly growing), but we also have some pretty amazing home cooks.

I like cooking at home but I like eating out more (it’s just way more convenient with Mike and my current lifestyle). I think the stuff I dish out (ha, get it? ‘dish out…’) is pretty tasty but would pale in comparison to most home cooks.

It definitely pales in comparison to anything created by Russell Bird – a local home cook turned competition cook who recently took home 2nd Place in the Bacon Category at the World Food Championships! 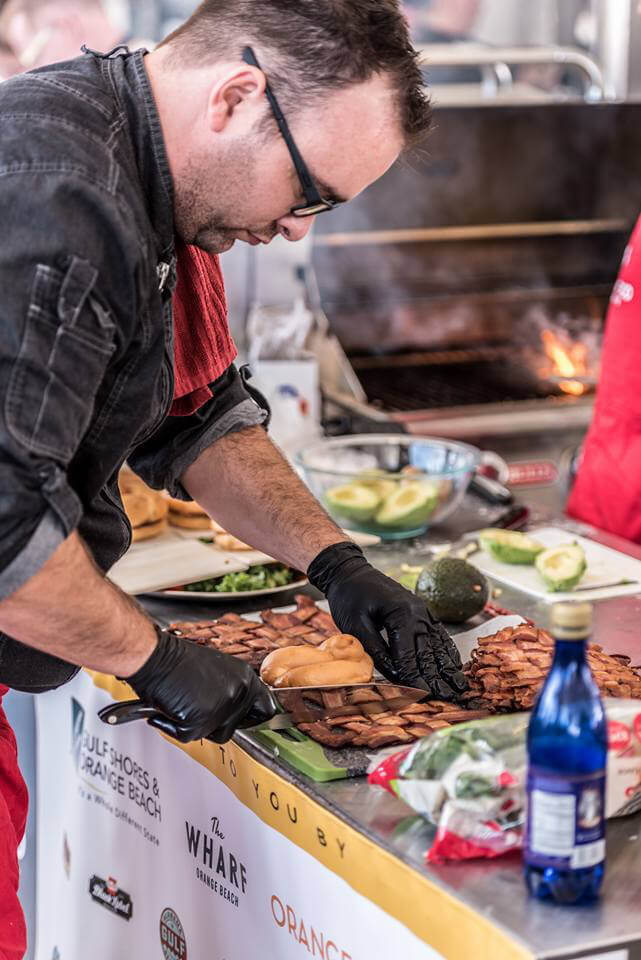 I think we need to pause for a second and let that sink in.

Russell, who has no professional cooking experience, represented Canada (not just Edmonton, not just Alberta, but the entire country) in the ‘Bacon’ category, competing against chefs who are professionally trained and do it for a living – and places 2nd. 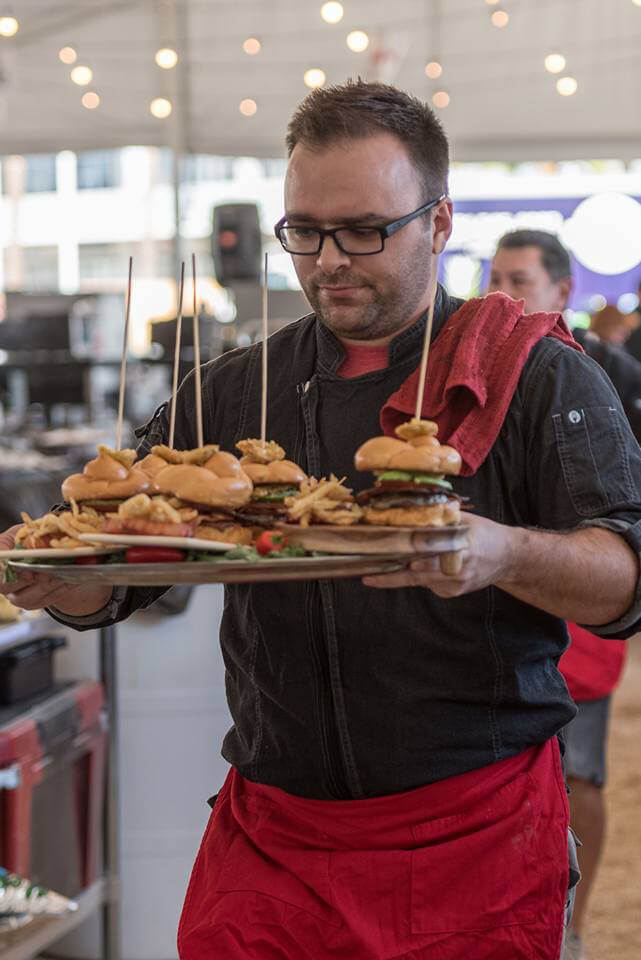 I became friends with Russell through social media (gotta love it!) and when I heard he’d gone and been crowned one of the top bacon chefs in the world, I knew I wanted to share his story on this blog.

So Russell invited me over for dinner – cooked up a recreation of his World Food Championships dish – and shared that story with me, which I’m now sharing with you! :) 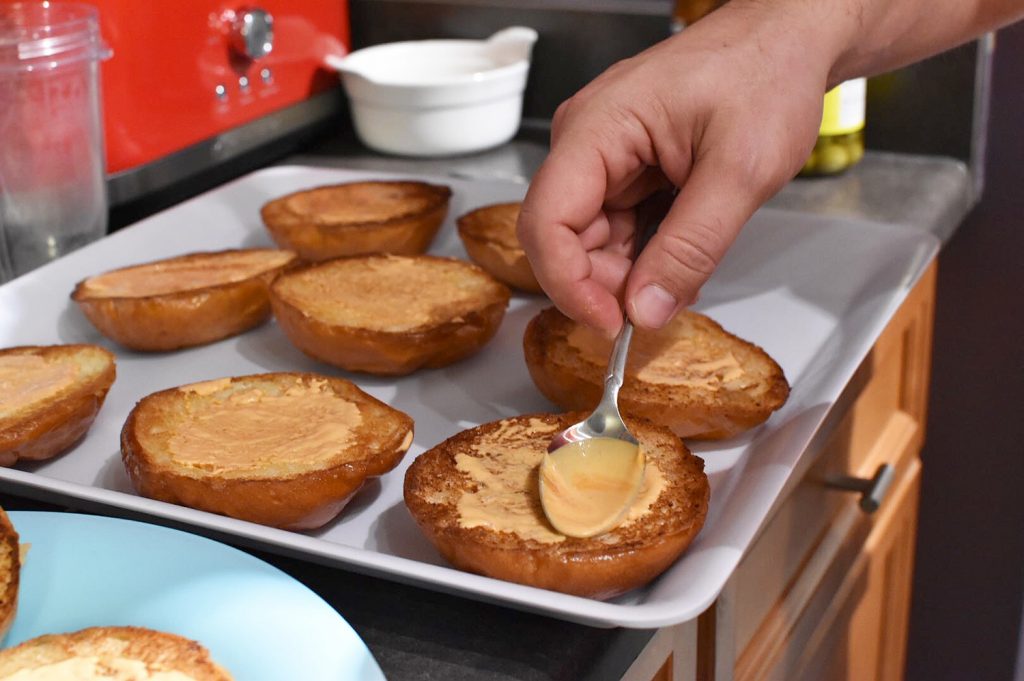 Dinner from a world food champion!

As mentioned, Russell has no professional culinary training.

He really started cooking in 2005, when he became unemployed for about a month. What does one do in unemployment? Watch a lot of TV, usually. In this case, Russell watched a lot of Food Network. He became inspired and encouraged to try to recreate dishes he saw on TV – at home.

His wife Jocelyn was the lucky recipient of Russell’s food experiments. She was thrilled actually – that she would come home from work with an incredible meal on the table.

“It was better than when I would spend all day doing nothing and she’d get home from work and see that I’d done nothing and she still had to make dinner,” Russell says.

Russell recalled cooking gourmet food every day for a month – finding inspiration from the show, heading to the market for local ingredients, and then “cooking like Giada De Laurentiis.” 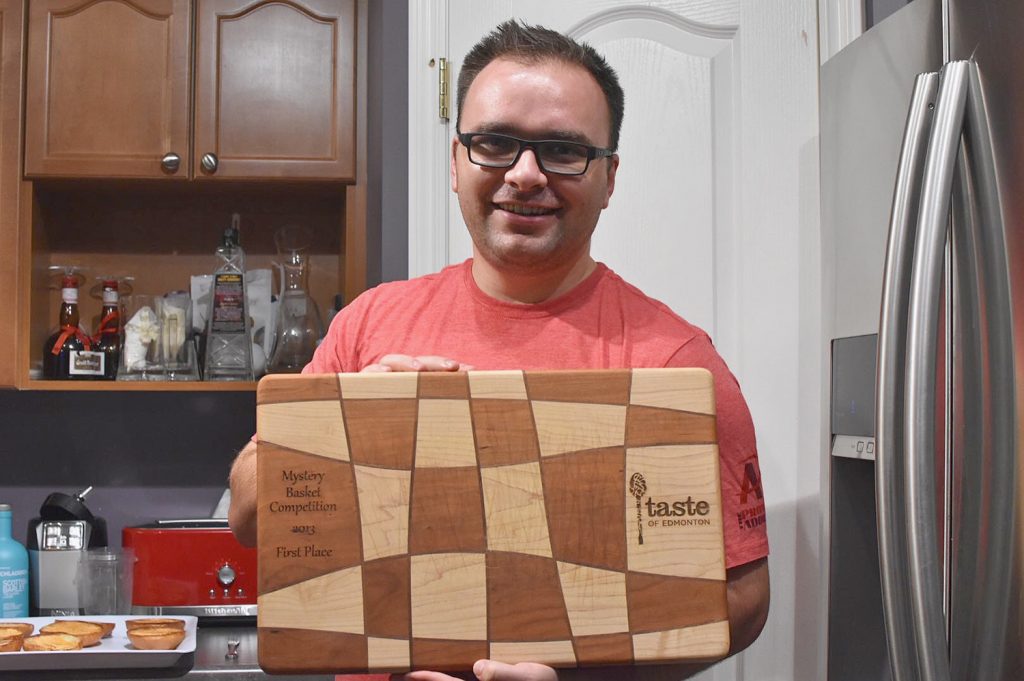 His first cooking competition award that set him on this very delicious path.

It was in 2013 when Russell entered his first cooking competition.

He saw on Twitter (again – social media is great, isn’t it?) that Taste of Edmonton was looking for amateur teams to cook in their Mystery Basket Competition as part of that summer’s festival. 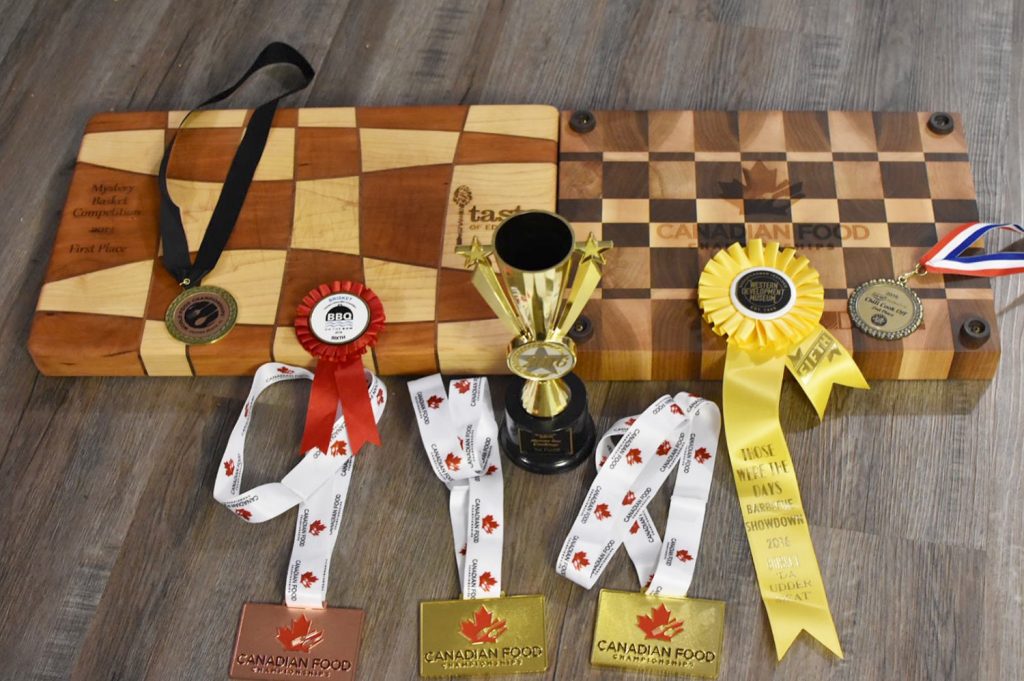 That set Russell on a very delicious, culinary path.

He competed again at 2014’s Taste of Edmonton competition (this time it was an Edmonton’s Best Smoky Contest) and won first place then too.

At first, Russell thought that’s really a competition for professionals and he’d rather retire as an undefeated champion, but the folks at Taste of Edmonton managed to convince him to compete (against chefs from across the country).

He ended up getting 3rd place, and only the Top 2 qualify for World’s, but I think the bacon Gods were lining up for Russell because the cook who won first place ended up backing out a month before the World Food Championships – which meant Russell was offered the chance to compete instead. 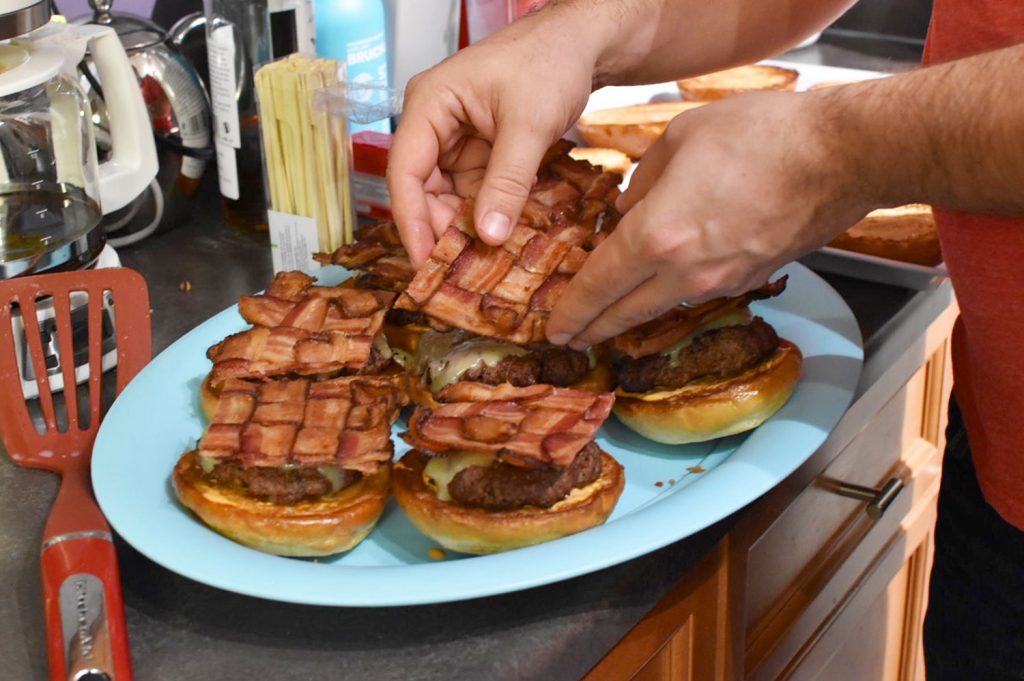 Ever eat a bacon weave/lattice before?

Russell’s World Food Championship sous chef was his father-in-law Ron and together they created the 2nd place-winning bacon dish:

Are you salivating yet? 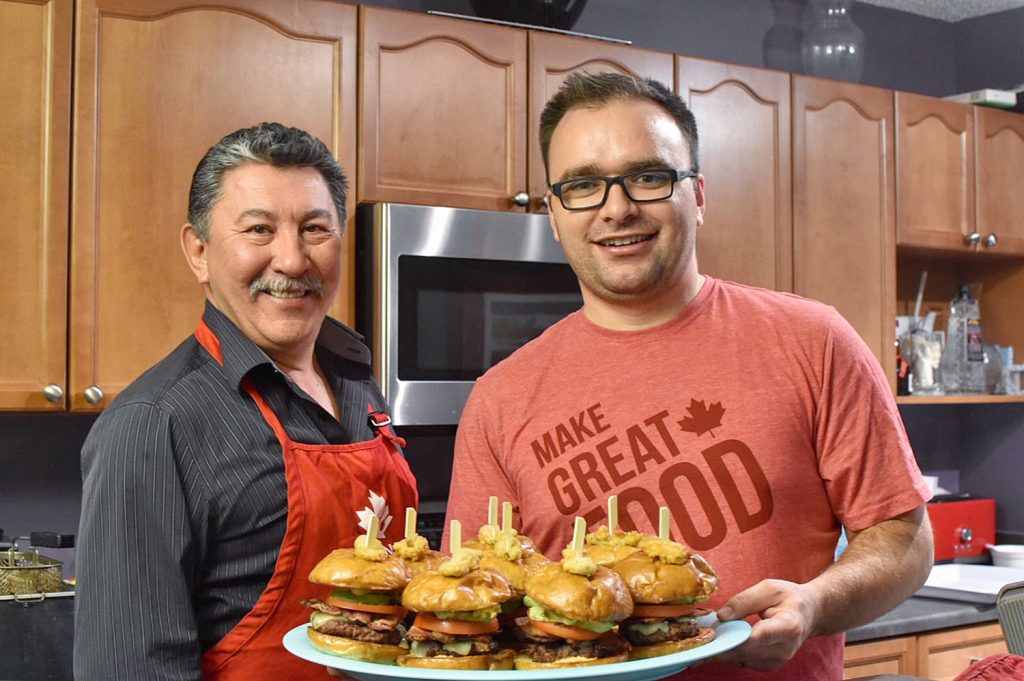 Russell with dad/sous chef Ron and their bacon burger recreation.

Their burger was a welcome flavour break by the World Food Championship judges as almost all of the Bacon category dishes were desserts.

Russell and Ron’s dish was last to be served and judged, and even after having eaten so much food already – some of the judges ended up eating the entire burger (and as you can see, it’s a pretty hefty burger).

(Read what this bacon critic had to say about Russell’s burger here!) 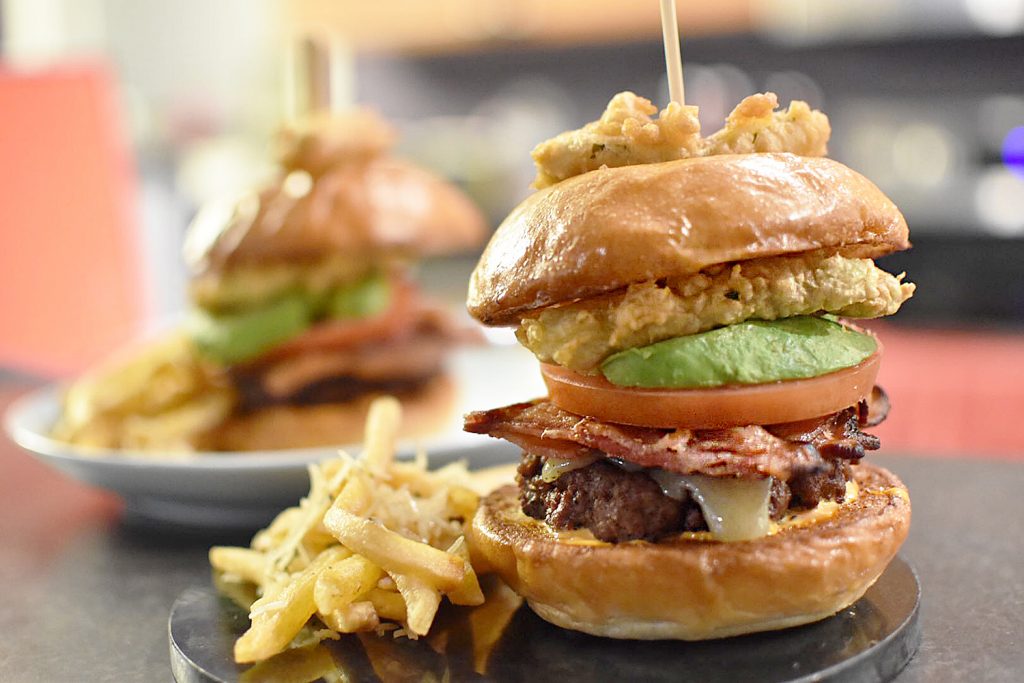 It was truly so much fun having dinner with Russell and his family and learning about his food journey.

It made me laugh, and I totally get it.

Since his first Taste of Edmonton competition, Russell, Ron and Russell’s wife Jocelyn have all participated in different competitions like chili cook-offs and BBQs.

He’s been sponsored by Alberta Pork (and is hoping to earn more food sponsorships as he grows his competition repertoire). 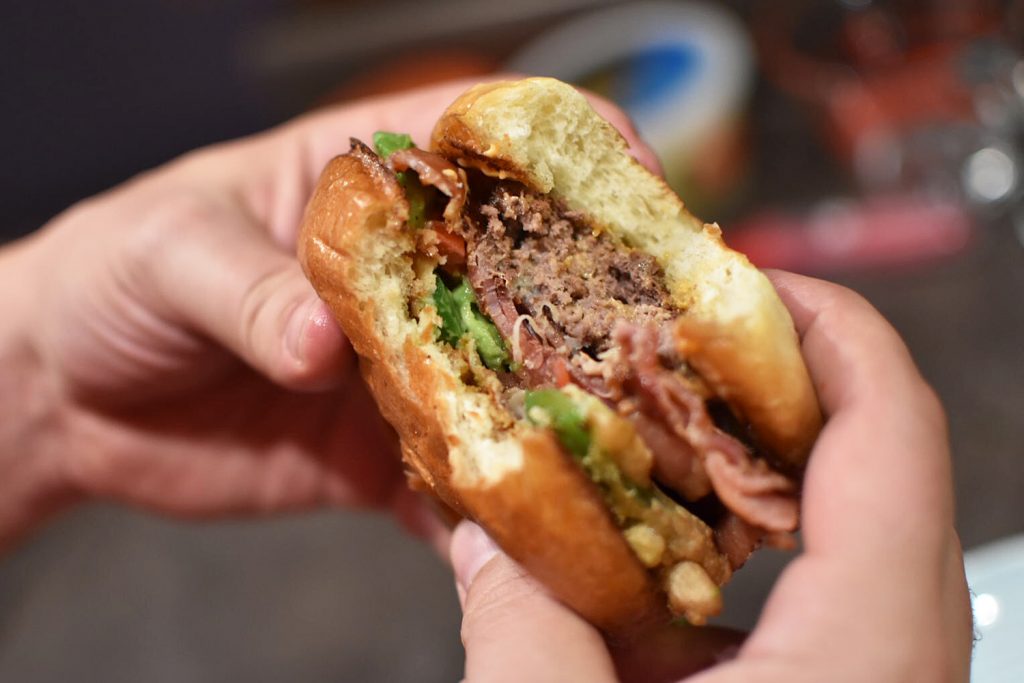 Biting into the bacon-y goodness.

Last year, Russell and Jocelyn donated a home-cooked dinner to an auction supporting the not-for-profit Chrysalis Society. Their dinner ended up going for $700.

“Most people don’t get $700 for having people to come over to their house for dinner,” Russell says.

Russell says he loves winning and all the emotions associated with competing.

“My heart races the enter time. I get nervous, I get sweaty, I bounce around,” he describes.

He also loves learning from other competitors.

As owner of promotional products company The Promo Addict, he also sees competing as a valuable way to make connections and promote his own brand and business (Canadian Food Champion jackets courtesy of The Promo Addict anyone?) 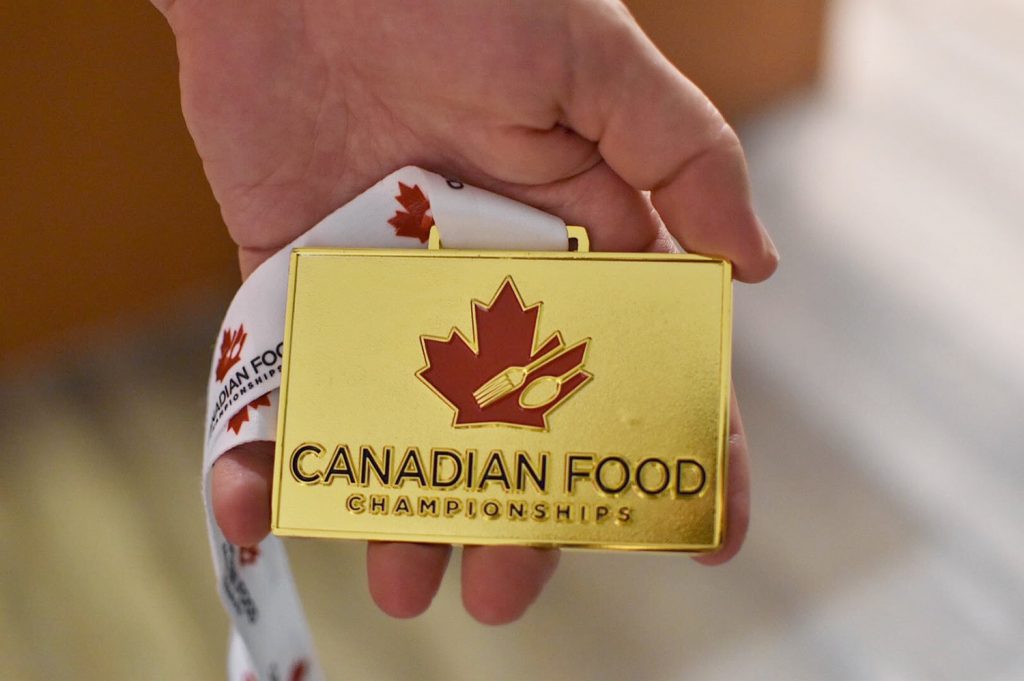 Russell could get used to this!

While cooking brings a ton of fun into Russell’s life, he says he doesn’t have any plans to do it for a living.

“I would love to do cooking shows,” he says, but mostly just continue creating for his family and seeing how far he can go in the culinary competition world.

Perhaps my favourite part of Russell’s whole story is that he just one day started cooking – became passionate and skilled at it – and has since gotten all of these great, life-changing and certainly memorable opportunities out of what really was a very simple, humble start.

That’s sort of the beauty of the Canadian Food Championships premise too.

Organizers say the competition is meant to be a platform for anyone with a passion for cooking – from the home cook to the professional chef – that gives these food lovers the opportunity to compete at an international level, up their own cooking talents and make them even more passionate about food. 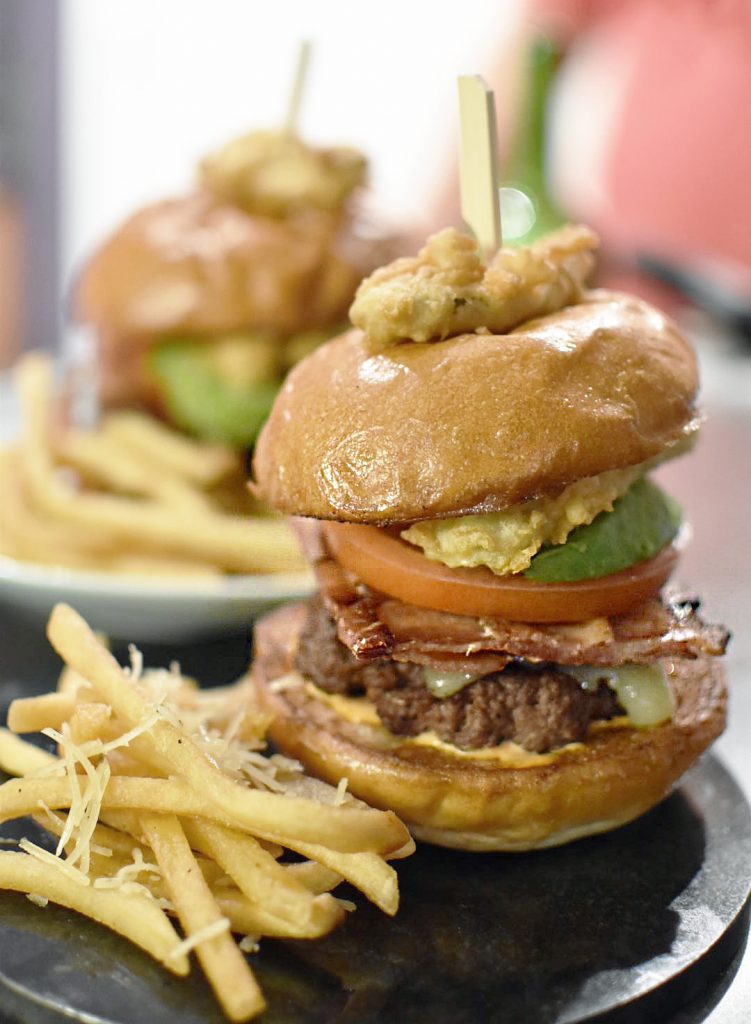 I’m really excited to see what Russell cooks up next.

I’m also excited to see which other Edmonton home cooks’ lives may get transformed through culinary competitions!

(We’ll see at a Taste of Edmonton next summer!)

We talk a lot about local restaurants putting Edmonton on the map but home cooks getting top spots in world cooking championships do the same.

Lots to be proud of about our food community!

Linda Hoang is a Canadian blogger based in Edmonton, Alberta, who writes about travel, food, lifestyle and pet topics. She's also a seasoned social media/digital strategist with a journalism background, the founder of the Edmonton International Cat Festival and co-founder of Stop Race Based Hate, an online anti-racism education tool. Linda loves exploring the world with her partner Mike, eating their way through cities, supporting local businesses, and photographing Instagrammable Walls. Linda is a fur-mom to two cats and two dogs.
PrevPreviousWhat To Do For New Year’s Eve: Edmonton Events (Dec 31, 2016)
NextReview + Giveaway: The Rec Room (Edmonton)Next